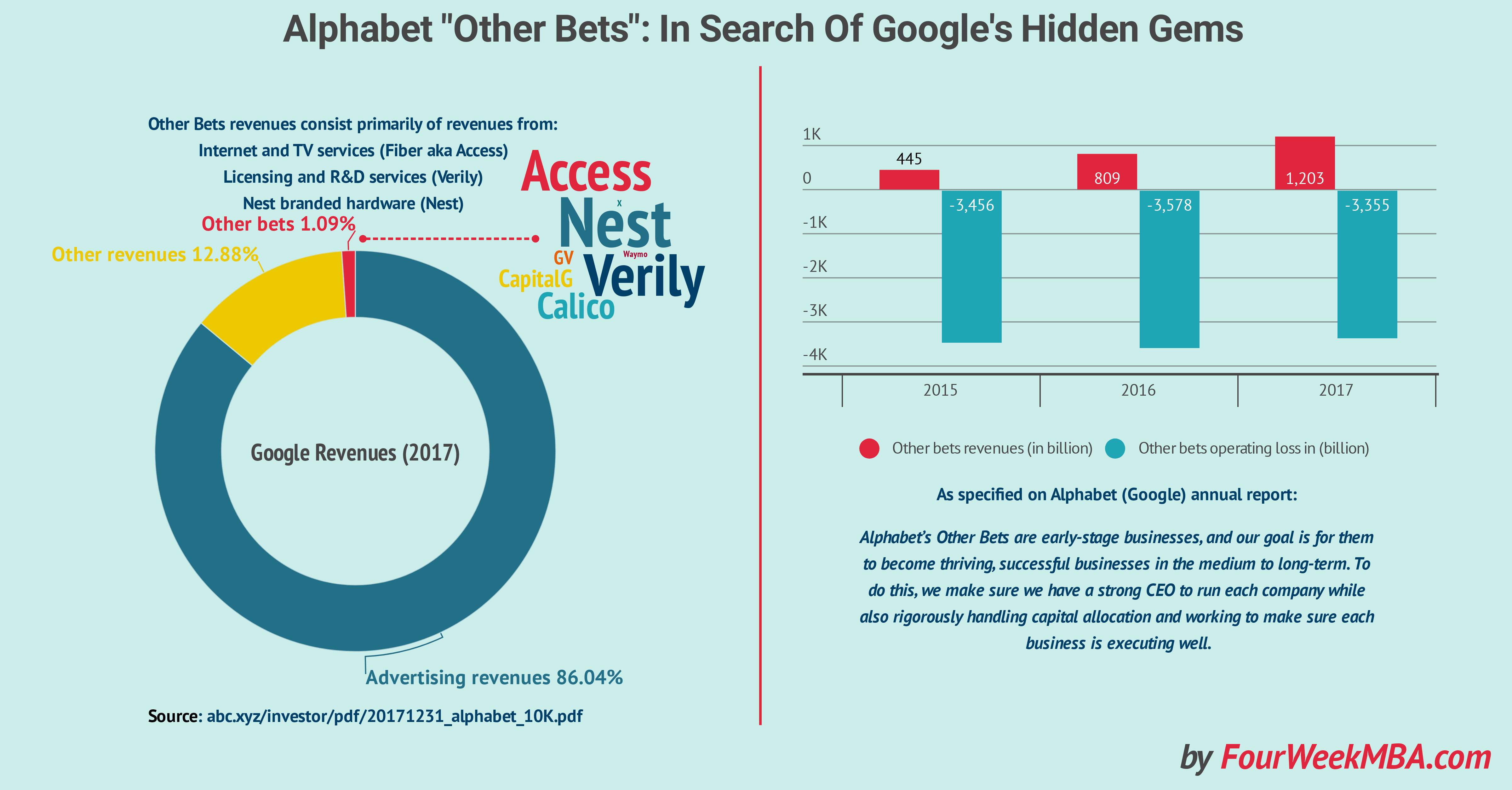 Google other bets comprise a list of eight companies that span from life science to self-driving companies:

Compared to the total Google’s turnover, “other bets” represents about 1% of its overall revenues for 2017. However, if we imagined it as a spin-off of Google, that would be a startup worth looking at.

In particular, Google has invested so far in eight bets. Some of those bets might fail. Yet some others might not only grow exponentially in the next years. They might also transform Google’s business model.

Why is this important at all? My argument is that the business model resides the way a company thinks. Even though a company is made of principles that keep it together. The commercial forces behind a business model are so strong that they eventually prevail over the rest. Google has been using a hidden revenue generation pattern and an advertising business model. No doubt this represents a cash cow for the organization. However, the future of Google might look quite different.

As specified in the Alphabet annual report, “throughout Alphabet, we are also using technology to try and solve big problems across many industries. Alphabet’s Other Bets are early-stage businesses, and our goal is for them to become thriving, successful businesses in the medium to long-term. To do this, we make sure we have a strong CEO to run each company while also rigorously handling capital allocation and working to make sure each business is executing well.”

Not by chance, Google defined them as “bets.” Early-Stage businesses naturally come with considerable uncertainty. The interesting part? Some of them are already generating revenue.

Access is the Alphabet subsidiary that runs Google Fiber, which offers super-high-speed broadband access over fiber optic cables, to new cities. Access provides Google Fiber in 12 US metropolitan areas and offers its Webpass wireless service in another eight.

Calico is a research and development company whose mission is to harness advanced technologies to increase our understanding of the biology that controls lifespan. In short, it

As explained on the Calico website, these are the guiding principles:

Capital G is the growth equity investment arm of Google that supports an investment portfolio of companies by providing tactical advice across key functional areas such as engineering, product, sales, and marketing. By working closely with growth-stage companies, CapitalG argues that its pattern recognition enables it to draw learnings and help our portfolio scale effectively.

The portfolio of companies like Airbnb, Duolingo, Robinhood, Lyft and many others:

GV or Google Ventures is the venture capital arm of Google, which invested in more than 300 companies that push the edge of what’s possible. From fields of life science, healthcare, artificial intelligence, robotics, transportation, cybersecurity, and agriculture.

It branches in five main areas:

Verily develops tools to collect and organize health data, then creating interventions and platforms that put insights derived from that health data to use for more holistic care management. With three guiding product design principles: start with the user, simplify care, and lead on security and privacy.

The company monetizes by selling its R&D services. Verily has also made significant progress on critical programs, like the launch of its Project Baseline study with Duke University and Stanford Medicine, and received an $800 million investment in 2017 from Temasek to accelerate its strategic programs.

Waymo began as the Google self-driving car project in 2009. Waymo is now an independent self-driving technology company with a mission to make it safe and secure for everyone to get around—without the need for anyone in the driver’s seat.

Waymo continues to progress the development and testing of its technology and now has a fleet of vehicles in Phoenix, Arizona, driving without a person behind the wheel.

X is Google’s arm which is aimed at solving hard problems by creating new radical technologies. Some of the projects that came our from X comprise Verily, one of Google’s “other bets.” Other projects consisted of delivery drones, internet balloons, and cybersecurity. A few other projects in development are smart glasses, free-space optics, and learning robots.

Google founders Larry Page and Sergey Brin always believed in investing some of the company’s resources in hard, long-term problems. In 2010, a new division forms to work on moonshots: sci-fi sounding technologies that aim to make the world a radically better place.

Inside Google other bets financials

Other Bets revenues consist primarily of revenues and sales from:

Other Bets is a combination of multiple operating segments that are not individually material. As we’ve seen Other Bets includes businesses such as Access, Calico, CapitalG, GV, Nest, Verily, Waymo, and X.

That isn’t a cheap bet for Google, which is sustaining those other bets with the money coming primarily from its advertising networks.

An inside look at the overall Google business model

As of 2017, Google still got 86% of its revenues from advertising. However, it is important to notice how other areas of the company are growing pretty quickly. For instance, the other part of the business which focuses on App purchases through the Google Play store, the Google Cloud offering, and the Hardware product was in 2017 a $14 billion a year business. Compared to 2015 when it represented just $7 billion.

What instead will be the role of the other bets?

Summary and conclusions: What if one of the other bets will be the next hit in tech and business?

Behind Google’s primary business model hides an accounting item called “other bets.” Those are primarily eight companies, some of which are already generating over a billion dollars in revenues, almost three times over of what they made in 2015. The other bets already generating revenues are mainly Google Fiber (Access), Verily and Nest.

However, in 2017, Google spent $4.5 billion to keep those companies going. That tells us we can expect some of those bets becoming a huge hit in the coming years. Which one will that be? Only time will tell!