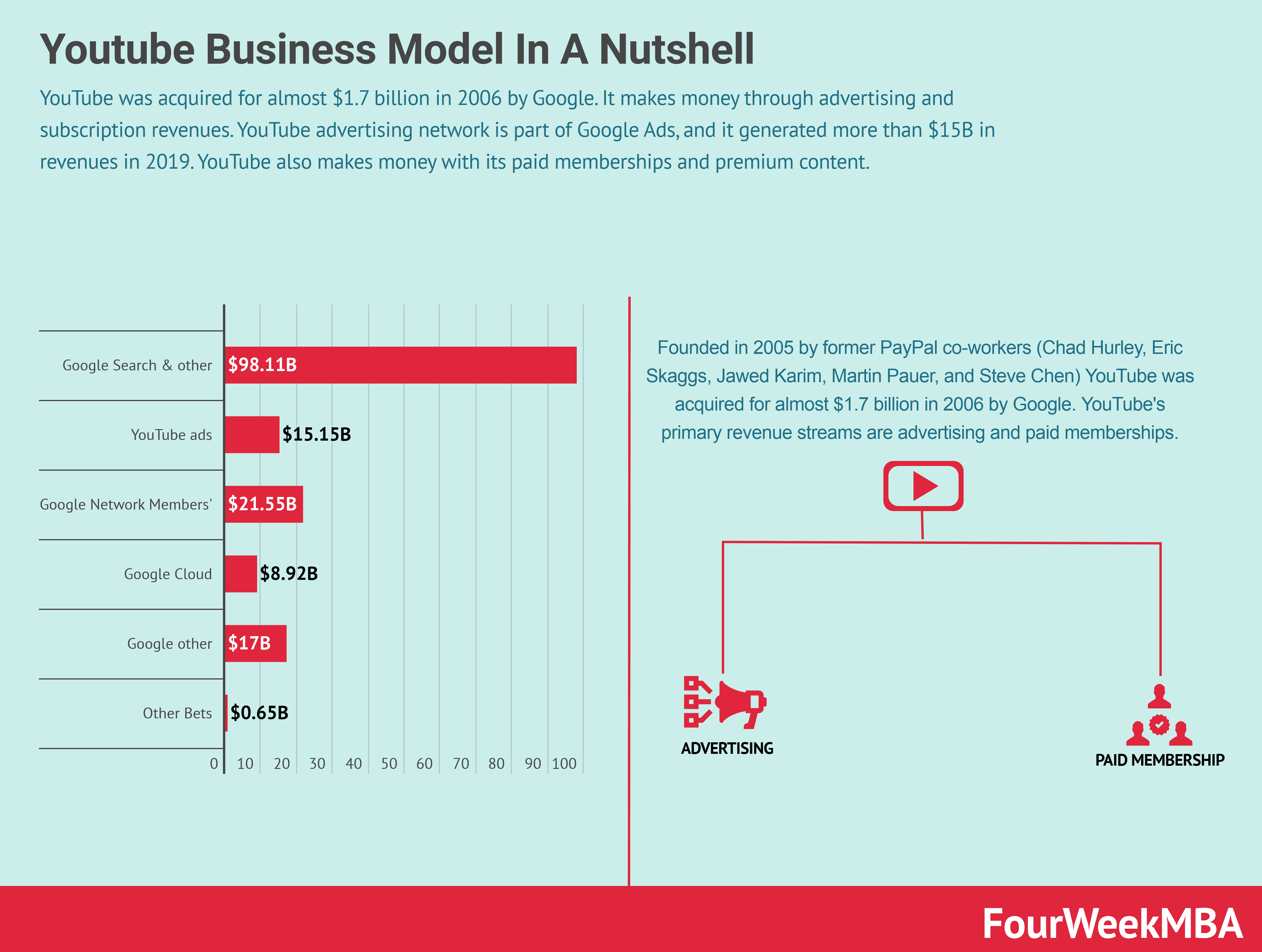 YouTube was acquired for almost $1.7 billion in 2006 by Google. It makes money through advertising and subscription revenues. YouTube advertising network is part of Google Ads, and it generated more than $15B in revenues in 2019. YouTube also makes money with its paid memberships and premium content.

YouTube start: It all began at the San Diego Zoo

This was the first inaugural video taken at the San Diego Zoo, for YouTube, the video-sharing platform which would become the most popular website – after Google – in a decade.

As reported by AdAge, back in July 2006, “The popularity of YouTube is growing at an astronomical rate, as web traffic to the video-sharing site grew 75% just in the week ending July 16, from 7.3 million to 12.8 million unique visitors, according to Nielsen/NetRatings. Traffic to the site has grown nearly threefold — 297% — since January, making it the fastest-growing site online.“

YouTube copyright issues and how it dealt with them

As growth picked up right away, problems for copyrighted content loomed ahead. YouTube founders sat down with media executives to convince them of the value, in terms of business for them to be featured on YouTube.

The same AdAge reports – in regards to the YouTube business model – “Still in the process of building its advertising model and sales team, YouTube is experimenting with a number of sponsor partnerships. Last month, NBC struck a deal with YouTube to promote its fall TV lineup just months after ordering the site to take down the copyrighted video. Under the terms of the agreement, NBC is creating an official NBC Channel on YouTube to house its fall preview with exclusive clips to promote shows such as “The Office.” And earlier this month, Walt Disney tapped YouTube to promote “Pirates of the Caribbean: Dead Man’s Chest,” with rich-media banner ads.“

Google acquisition of YouTube for $1.7 billion in less than two years

YouTube founders managed to survive and thrive until in 2006 the big hit arrived. Google purchased YouTube for almost $1.7 billion. As reported by NBC news back in 2006 “Internet search leader Google is snapping up YouTube for $1.65 billion, brushing aside copyright concerns to seize a starring role in the online video revolution.”

And it goes on “The price makes YouTube Inc., a still-unprofitable startup, by far the most expensive purchase made by Google during its eight-year history. Last year, Google spent $130.5 million buying a total of 15 small companies.”

The deal was announced with such excitement that Sergey Brin also said “It’s hard to imagine a better fit with another company,” during a conference call after the purchase. “This really reminds me of Google just a few short years ago.”

Explosive growth: how YouTube got to over two billion views by 2010

By 2010 YouTube recorded over two billion visits per day. Just five years before, the YouTube’s founders, former PayPal co-workers were sitting the whole night to go through the test and preparation of the video-sharing platform that would be acquired by Google, just 19 months after that night!

At that point, YouTube had already over 2 billion views per day, way more than combined US networks. By 2012 YouTube would double that number. In 2012 YouTube kept consolidating its massive international expansion.

According to Similar Web estimates, in the period going from March-August 2019, YouTube is the second most popular site in the world, right after Google. And it has stunning engagement metrics.

With almost 30 billion total visits per month, average visit duration at over 23 minutes, and almost 10 pages visited per session, YouTube is incredibly sticky.
That is also why YouTube is such an important part of the Google Business Model. As the search engine evolves from serving more and more types of content. In the coming years, Google might show more and more video content to users.
That might make YouTube even more valuable in the years to come.

As explained on the YouTube website “We believe that everyone deserves to have a voice and that the world is a better place when we listen, share and build community through our stories.”

As part of Goole’s (now Alphabet) financials, we don’t know the revenues for the video-sharing platform. Back in 2006 Google announced YouTube revenues as “not material” (in short, they are not required to shot them on the books). However

Since its acquisition from Google, YouTube contributed over $15 billion through its advertising machine alone. Other YouTube Revenues are comprised within the Google Other Revenue breakdown, and are related to paid memberships of the platform.

That means the YouTube acquisition has turned to be a very successful one so far, as the company might be worth anywhere between $50-100 billions (depending on the multiple you might apply).

As explained on Google annual report “As interactions between users and advertisers change and as online user behavior evolves, we continue to expand and evolve our product offerings to serve their changing needs.

Over time, we expect our monetization trends to fluctuate. For example, we have seen an increase in YouTube engagement ads, which monetize at a lower rate than traditional desktop search ads. Additionally, we continue to see a shift to programmatic buying which presents opportunities for advertisers to connect with the right user, in the right moment, in the right context. Programmatic buying has a different monetization profile than traditional advertising buying on Google properties.

The advertising business model for media is not new, and it represents the primary driver for Google’s revenues today, and we can well hypothesize that it will be the primary drivers for both Google and YouTube in the next years.

As explained in Google’s annual report “We also experienced growth in YouTube revenue driven primarily by video advertising across TrueView with a growing contribution from ad buying on DoubleClick Bid Manager, as well as improvements in ad formats and delivery.”

The advertising business model is not the only possible. As Netflix has been able to grow into a multi-billion dollar company with its subscription business model, also YouTube is experimenting with that.

In the meanwhile, Google (now Alphabet) is transforming YouTube in a fully operating advertising machine, which doesn’t look, so far, that far from how Google monetizes its pages.

It comprises YouTube’s original series, and movies range from dramas featuring award-winning actors to comedies with top YouTube creators and documentaries covering multi-platinum artists. With YouTube Premium, you have access to all YouTube Originals, available to watch on all devices. You can find the list of movies and series on the YouTube Originals channel.

Ad-free and offline play in the YouTube Kids app

Ad-free, offline, and background play in the YouTube Gaming app

We cannot know how many YouTube paying members there are. However, YouTube is pushing on its paid memberships.

With an ad-free and offline library, YouTube music premium and the YouTube originals, the video-sharing platform might well be able to compete with Netflix, Spotify and others media companies running on top of the subscription-based business model.