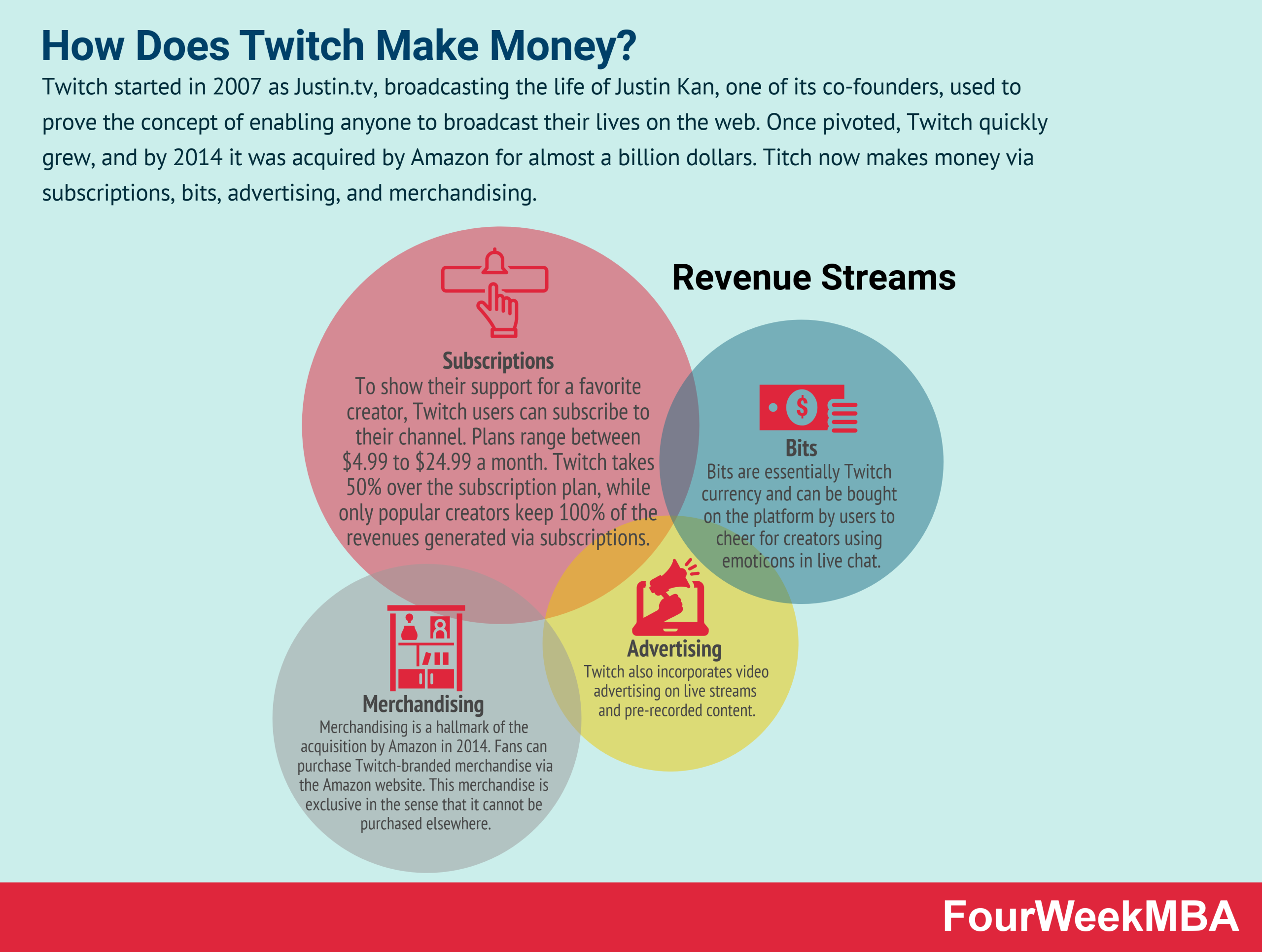 Twitch started in 2007 as Justin.tv, broadcasting the life of Justin Kan, one of its co-founders, used to prove the concept of enabling anyone to broadcast their lives on the web. Once pivoted, Twitch quickly grew, and by 2014 it was acquired by Amazon for almost a billion dollars. Titch now makes money via subscriptions, bits, advertising, and merchandising.

Twitch is a North American live streaming service with a focus on esports broadcasting and video game streaming. Twitch was founded as a spin-off to Justin.tv. Founders Justin Kan and Emmett Shear noted that the gaming category on Justin.tv was the most-watched category on the site.

Three years after Twitch was founded, it was identified as the fourth-largest source of peak internet traffic in the United States. As a result, the parent company of Justin.tv was rebranded as Twitch Interactive and Justin.tv was shut down.

Twitch Interactive was then acquired by Amazon for $970 million, enabling the platform to become integrated with Amazon Prime.

Twitch continues to dominate the gaming and esports streaming market, boasting over a hundred million actively monthly users. The platform has since expanded to offer creative content, music broadcasts, and affiliate programs for streamers.

Now Twitch is part of the Amazon’s empire:

Twitch has an extensive revenue generation model – despite being predominantly a freemium product. Without further ado, let’s delve into the finer details.

To show their support for a favorite creator, Twitch users can subscribe to their channel.

There are three, tiered options, with the latter two accommodating those who generally wish to provide more support:

Irrespective of the plan chosen, Twitch takes 50% of the total revenue. In limited scenarios, Twitch allows popular creators to keep 100% of the subscription revenue as an incentive to keep them on the platform.

Bits are essentially Twitch currency and can be bought on the platform by users to cheer for creators using emoticons in live chat.

The company first negotiates with an advertiser and then the creator receives a portion of the advertising revenue. The total amount a creator receives is dependent on their CPM (Cost Per Mile), or a fixed price per one thousand views.

Twitch works with each creator to agree on a unique CPM. Confidentiality clauses mean that exact CPM rates are hard to quantify.

Merchandising is a hallmark of the acquisition by Amazon in 2014.

Fans can purchase Twitch-branded merchandise via the Amazon website. This merchandise is exclusive in the sense that it cannot be purchased elsewhere. Clothing is the most popular form of merchandise, but Twitch fans can also purchase gift cards and pet accessories.

Amazon Prime integration makes these purchases exceedingly easy. Such is the popularity of Twitch that profit margins are also high.