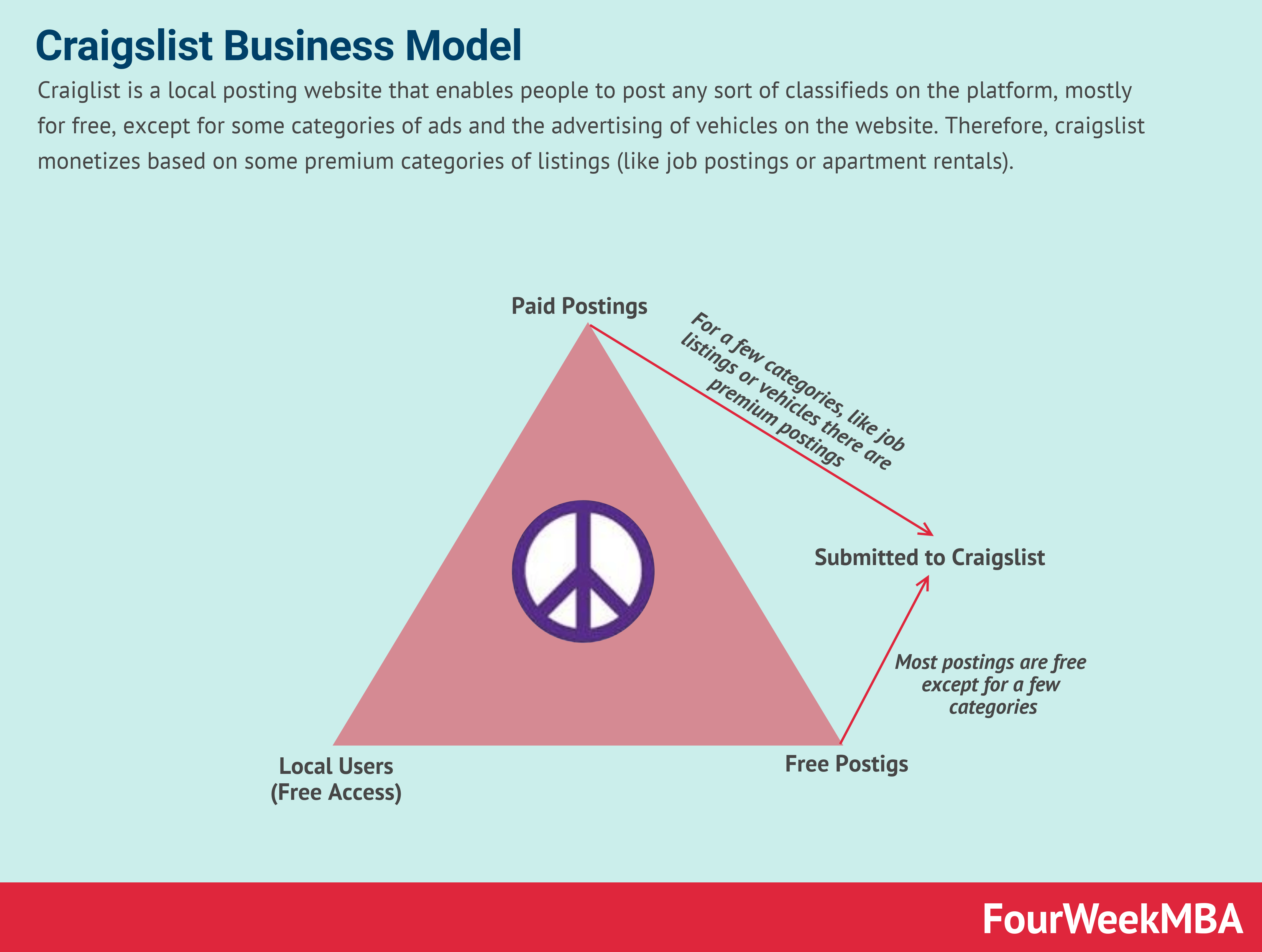 Craigslist is a local posting website that enables people to post any sort of classifieds on the platform, mostly for free, except for some categories of ads and the advertising of vehicles on the website. Therefore, craigslist monetizes based on some premium categories of listings (like job postings or apartment rentals).

When you see a website that in 2020 looks like this, and that is still around, that is mesmerizing in its own sake:

If you add to it that this website has been and still is among the most popular on earth, it’s backed by a private company, that never got a dime in venture capital funding. Its founder, Craig Newmark, left the company in the hands of another CEO while he stayed for decades in the role of a customer service representative. Yet, this same company might be making anywhere between hundreds of millions to a billion in revenues.

Needless to say, you will want to know how did that even happen.

The origin story: started as a newsletter, turned into one of the most popular sites on earth

After getting to San Francisco, mid ’93, I got lots of help online about getting to know the city.

Early ’95, I figured time to give back, started mailing list for arts and tech events in SF. Grew rapidly via word of mouth. Had to give it a name, and as a very literal nerd, wanted to call it “SF events”, but friends told me they called it “Craig’s List”, that I’d inadvertently created a brand. (Then, they explained what a brand is.)

So, I named it “craigslist”, lower case “c”. The lower case thing is to de-emphasize me. (Capitalizing it is misspelling it.)

This is how Craig Newmark described the foundation of Craigslist. Where we often hear of companies with a grandiose vision since the start (which is more an apocryphal story than else) Newmark said about his vision for Craigslist, “I prefer to think of myself as lacking vision whatsoever which is a great comfort.”

In an interview for Inc. Newmark explained, how in 1993, “I (Newmark) left IBM and went to Schwab in 1993, and it had a brown-bag-luncheon series where I went around the company saying, “Here’s the internet. It’s going to be how we do business someday.”

Craigslist was launched as an email that went out to 10-12 people related to an event “Joe’s Digital Diner” where those people would discuss emerging technologies. As more and more people asked to be added to the Newmark newsletter, he started to cover arts and technology events first and later featuring “post about a job or something for sale.”

The newsletter then transitioned into a website that by 1997 had over a million page views, yet by 1998, Newmark was still running the site on his own, helped by a few volunteers. Only in 1999, Newmark left the company he was working on, he moved full-time to Craigslist and turned it into a company.

Did Craigslist get funding?

At the question on Quora, Craig Newmark, also highlighted, “In 1999, I decided to keep the site almost all free and to walk away from the money bankers and VCs told me was on the table. Not altruism, I’m a nerd, and look at things differently.” In another answer he defined himself “NOT altruistic, it’s dysfunctional.”

Newmark and his obsession for customer support

In starting craigslist, way back in ‘95, I assumed a direct customer support mission.

That put me in direct contact with thousands of people, mostly Americans, who needed basics, like help putting food on the table, getting that table, getting a roof to put the table under.

Direct customer service like that means getting in touch and staying in touch with regular people in a way that I, as an old-school nerd, never did.

I also learned to ignore trolls, if possible; they thrive on attention.

Newmark is, for sure, an atypical personality, also for the Silicon Valley scene. After leaving the role of CEO, he also left the management for good. Differently to what usually happens to founders pretending to leave the company just to control it from the outside, Newmark instead has stayed for over twenty years in a customer support role.

Is Craig Newmark still at Craigslist?

Overall, I’ve delegated myself into uselessness; I still do just enough customer service to stay in touch with the needs of regular people.

This was back in 2016, now Craig Newmark is primarily focused on his philanthropic foundation. To understand how active Newmark has been on Craigslist, when a user asked on Quora, back in 2016, how to unblock a company that had been blocked on Quora, Newmark replied “Please email specifics to craig@craigslist.org. I’ll share the request with the team. Thanks!”

That, nonetheless he had left management since 2000.

The fear of the founder syndrome

We associate most of the successful companies today with their founders. Founders haven’t’ just remained primary owners of their organizations, but perhaps also the ones who run it in the most important role, that of CEO. And yet, Craig Newmark fearing the “founder’s syndrome” or the tendency of founders to keep enormous power, after the initial success of the company, he left management roles by 2000, and he only stayed as a customer service representative.

I wrote all the code in the first few years and used an ISP which provided a web programming platform for maybe thirty bucks per month.

Craigslist, in the early years just grew through word-of-mouth, and it transitioned from newsletter to website, and only in 2008, as a multi-lingual website. Craigslist’s pace is so slow that when you look at the website layout it barely seems changed over the years. It seems a website left behind the 2000s and yet it’s still a successful website.

This is at the core of its philosophy to keep it simple, straightforward, and to avoid fanciness at all costs.

Craigslist served as traction for Airbnb

As the story goes, in 2007, Brian Chesky and Joe Gebbia couldn’t afford the rent on their San Francisco apartment that is why they decided to transform their loft in a lodging space.

Yet instead of relying on Craigslist, they built their site, which they called Airbed & Breakfast and leveraged on Craigslist to drive users back to their website,

This would serve an important growth channel to the initial growth of Airbnb, a company that would later be worth billions.

Craigslist challenged many of the existing giants of the initial web age. As a successful website and marketplace, with a format, mostly free, companies like eBay were challenged by Craigslist. So what’s the best way to avoid losing the battle? One way is to acquire a competitor. That is what eBay set to do back in 2004.

When it acquired a 25% stake in the company, by one of the private shareholders of Craigslist (the company has never been listed), eBay was trying to make up for its inability to build a thriving classifieds section on its marketplace, as reported by NYTimes back in 2004.

This first acquisition was just an attempt by eBay to purchase Craigslist. But the take over never happened. Instead, by 2008, eBay would sue Craigslist claiming a “dilutive action” where, as reported at the time by Reuters, Newmark, together with the CEO had tried to reduce the ownership stake of eBay from the 25% to 10%.

Eventually, by 2015, eBay would sell back its stake to Craigslist, which had become over 28%. Apparently, as reported by Forbes, it had bought it from the then-disgruntled shareholder Phillip Knowlton for $16 million, while both Craig Newmark and chief executive Jim Buckmaster had received $8 million. eBay eventually admitted it was trying “to buy the whole thing” but it never happened.

Was Craigslist all about its “personals”?

Craigslist has built a name over the years also thanks to its friendly attitude toward “calsual encounters” on the website. Indeed, its section called “personals” has been among the most popular on the site. As it enabled people to find dating partners esly, and they could also post and advertise photos of themselves.

Craigslist shut it down as it announced it at the time:

Any tool or service can be misused. We can’t take such risk without jeopardizing all our other services, so we have regretfully taken craigslist personals offline. Hopefully we can bring them back some day.

To the millions of spouses, partners, and couples who met through craigslist, we wish you every happiness!

How does Craigslist make money?

Most of Craigslist postings are free, except for certain postings, like advertising of vehicles on the website.

As highlighted on Craigslist website “all craigslist postings are free, except for:

As of 2020, Craigslist still seems to have a strong digital presence, mostly built n its brand:

Indeed, most of the traffic on the platform is direct, therefore people skip search engines to reach the platform directly.

Over the years, at least in the US, interest on the brand and website has decreased, yet still strong.

This strength is primarily driven by the local listings, as people across the world use Craigslist locally, to list their stuff for free. And the fact that most of the listings are free, and its wide traffic, surely makes its value proposition still compelling.

Craigslist is such an unconventional story, that it leaves us with many open questions about how to build a successful business without following any of the conventional rules that apply to the business world.

According to the Craigslist story, you can do all the above. There is a caveat though. Craigslist could have become any of the Amazon, Facebook, or Google of our days. Companies worth trillions and with a deep global reach, and able to dominate the industries of the future. And perhaps some of you reading this might think it’s good it didn’t turn like that.

Instead, it remained what it was, a local listing website, where here and there you might hear stories of its former popular “casual dating section.”