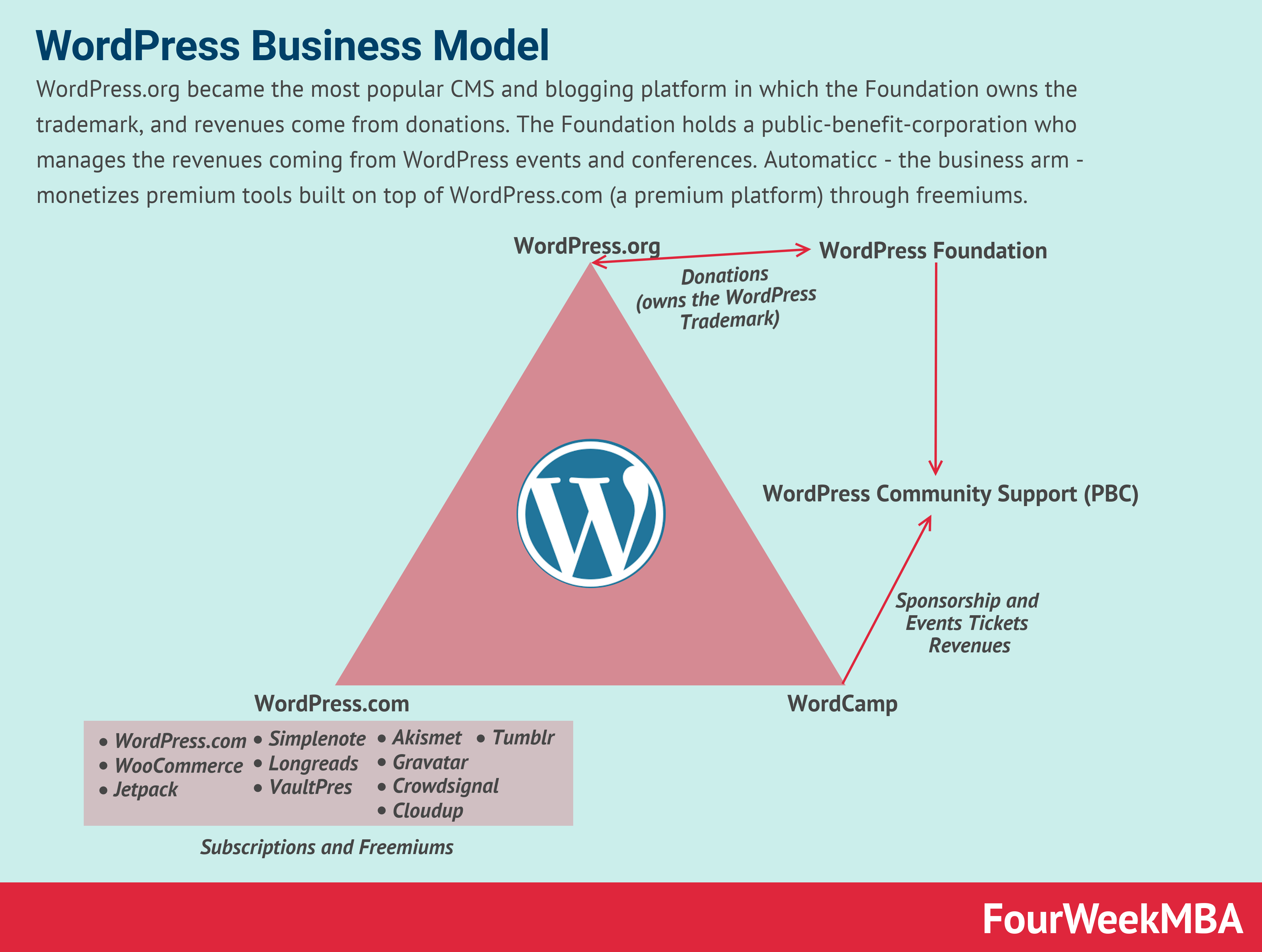 WordPress.org became the most popular CMS and blogging platform in which the Foundation owns the trademark, and revenues come from donations. The Foundation holds a public-benefit-corporation who manages the revenues coming from WordPress events and conferences. Automaticc – the business arm – monetizes premium tools built on top of WordPress.com (a premium platform) through freemiums.

In 2003, Matt Mullenweg (at that time 19) after a summer camp, had taken photos he wanted to share online. There were already blogging platforms like Blogger (from Google), MovableType, and others. Matt thought why not developing a whole new blogging platform.

He picked b2, as it was the only open-sourced, yet almost abandoned project. Jut back then, what would later become his co-founder Mike Little, left a comment to the Mullenweg’s article talking about the blogging platform, which gave rise to the project that would bring to WordPress.

They forked the code (copied the source and started to develop independently on top of it) and started the development of what would later become WordPress, it was the beginning of 2003 and by May they were ready to launch WordPress:

The initial growth of WordPress wasn’t without obstacles. Indeed, as WordPress was growing it also had to deal with with spam, and indeed Akismet (a software to prevent spamming on a blog) was among the first tools developed on top of WordPress (it was 2005), and on top of that Matt Mullenweg built its company, Automattic.

By 2005, Matt Mullenweg explained why he finally moved full time on WordPress:

It was just about a year ago I blogged about leaving Houston and driving across the country to join CNET. It ended up being one of the best moves of my life. Since moving to the Bay Area I’ve had incredible oppurtunities and met a whole tribe of amazing people. For what I’m passionate about, I really believe this is the best place in the world to be.

…I was wondering if I could focus on my passions full-time, to put more daytime hours into the community and projects that have changed my life already. I don’t need much, and working on WordPress full-time is my idea of heaven. I gave notice (they’ve been incredibly supportive).

I could say this was a hard decision, but the truth is I can’t imagine myself doing anything else.

By 2005, WordPress would grow even further, and it started to strike important partnerships. It also got featured on Yahoo Hosting services. As Matt Mullenweg left CNET and moved full time to WordPress, he also constituted Automattic, the company that would manage all the tools built on top of WordPress.

In 2006, WordPress was still a third player, as Google’s Blogger and Technorati were dominating.

Matt Mullenweg would “praise its third place” as he mentioned in his blog, back then: “[A] study of the performance of twenty major American companies over four decades found that the ones putting more emphasis on market share than on profit ended up with lower returns on investment; of the six companies that defined their goal exclusively as market share, four eventually went out of business.”

By the end of 2006, Blogger would take over Technorati, to become the most popular platform that year.

In the meantime, WordPress would also evolved substantially from 2003 to 2008:

In the meantime, by 2004, the first plugins (applications) started to be developed on top of WordPress, thus fostering the development community. In 2005, the WordPress repository would be officially launched, and it snowballed. In a few years, thousands of plugins would be developed.

By 2009 WordPress would further take off until it became the most popular world’s CMS (content management system).

To understand how the whole WordPress business model is organized, both in terms of the development community and business ecosystem, it’s important to distinguish between WordPress.org, the open-source CMS – that became the most popular blogging platform on the internet; and WordPress.com, a set of hosting and software services, often packaged under a single subscription plan.

In addition, the WordPress community has grown over the years through official events run by WordPress (known as WordCamp) and local meetups. As the WordCamp has grown into a large event non-profit organization, the WordPress Foundation has moved the management of the sponsorships for these events into a subsidiary “WordPress Community Support.”

Therefore, to recap this is how the whole WordPress business model works:

WordPress.org and the WordPress Foundation

The WordPress Foundation is a charitable organization that Matt Mullenweg founded, which mission, with its main open-source project, WordPress.org is “to democratize publishing through Open Source.”

The WordPress.org foundation runs through donations. For instance, inf 2018, the revenues which, as reported on the WordPress foundation website, “$13,296, with donations making up $11,178 of this amount.”

The WordPress trademark is owned by the Foundation.

Automattic was constituted back in 2005, when Matt Mullenweg moved full-time to WordPress. Automattic is the company behind products like:

A distributed company that reported 1186 employees in 2020. In the last round, in 2019, as the company got a $300 million funding round in Series D from Salesforce Ventures (the investment arm of Salesforce), the company got valued over $3 billion.

The primary products of the company all run on a subscription revenue model, and they are mostly freemiums.

WordCamps, the WordPress Community Support as a Public-benefit corporation

WordPress Community Support is organized as a public-benefit corporation (or a corporation which has a wider social scope).

The company collects sponsorship and ticket revenue. Therefore, WordPress decided to manage independently the trademark from the financials of the events organizations and WordCamps.

The WordPress ecosystem: plugins and themes

As any successful digital platform, WordPress grew as a result of the community and entrepreneurship“>entrepreneurial ecosystem born on top of it. To have a bit of context, in WordPress a plugin is an application, that without coding, allows users to do any sort of things (just like your iPhone apps enable you to enhance your smartphone in all sorts of ways).

The place where all the plugins are kept and published in the WordPress.org Repository (the equivalent of an AppStore in WordPress). And it was announced for the first time in 2005:

We are proud to announce wp-plugins.org, the WordPress Plugin repository. A need was felt for a set of common tools, and a common playground for developers creating plugins and themes to extend WordPress.

In May 2020, there were over 56,550 plugins available on WordPress.org. Popular plugins, like Yoast SEO, counted by May 2020, almost 250 million downloads, with over five million active installations. A company built on top of a WordPress plugin, which, in 2019, generated $12 million in revenues.

Thus, the whole success of WordPress came, as it enabled an entire ecosystem of developers to build valuable tools for users, which made the platform to scale, with limited costs. As a result, a whole entrepreneurial ecosystem formed.

Wikipedia is sustained by the Wikimedia Foundation, which is supported mostly by donations and contributions, which in 2018 amounted to...