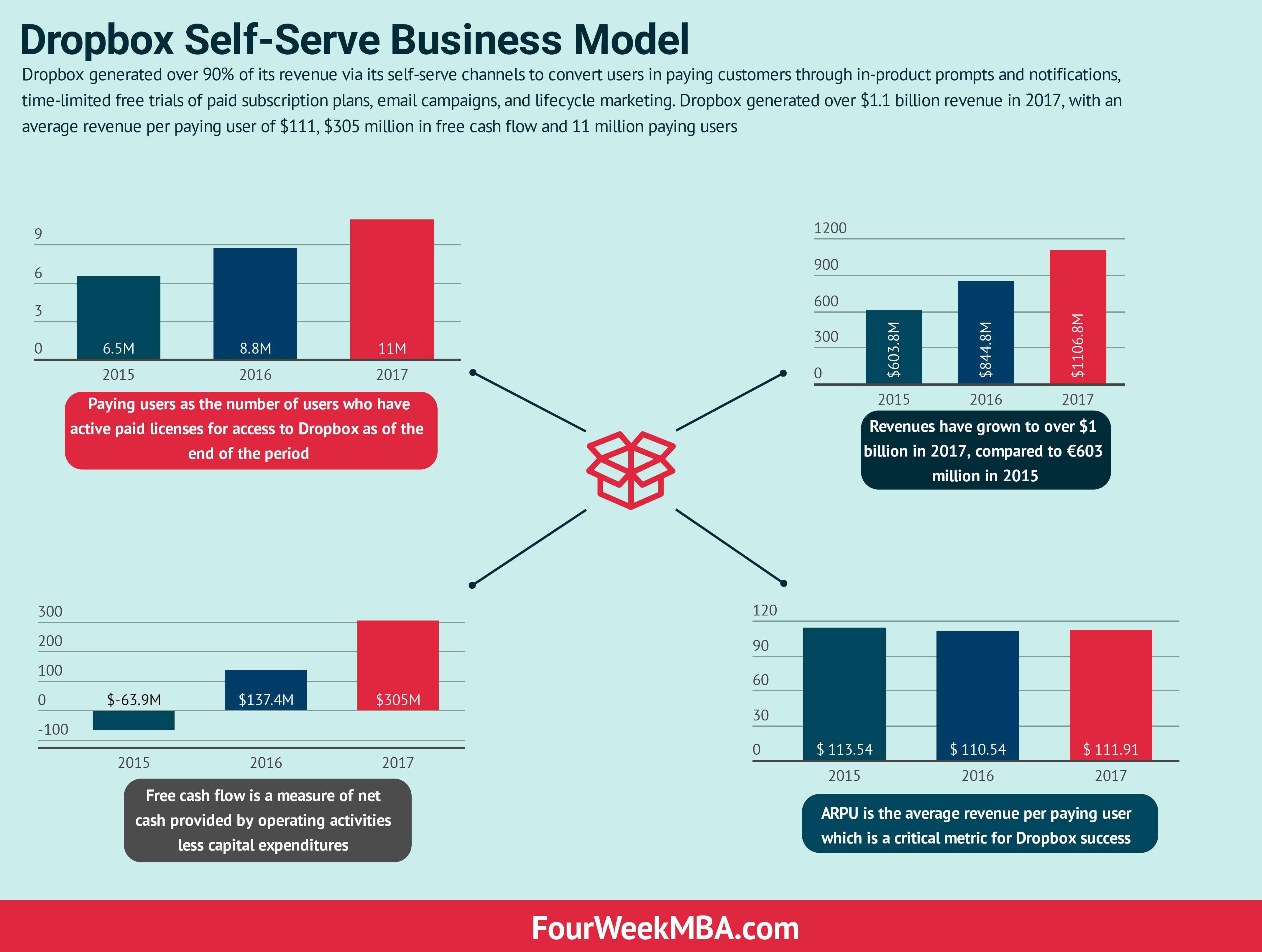 Dropbox generated over 90% of its revenue via its self-serve channels to convert users in paying customers through in-product prompts and notifications, time-limited free trials of paid subscription plans, email campaigns, and lifecycle marketing. Dropbox generated over $1.1 billion revenue in 2017, with an average revenue per paying user of $111, $305 million in free cash flow and 11 million paying users

We’re going to see all the nuts and bolts of Dropbox business model. From its mission to its core values, pricing strategy and the stakeholders involved in its success. The idea is to have a holistic picture of the organization. When we think about what is a business model, that is a set of pieces of a puzzle that once combined create an organization able to unlock value in the long run.

Founded in 2007 with a simple purpose: Life would be a lot better if everyone could access their most important information anytime from any device.

Since then Dropbox has been working on allowing access to users and teams across the globe leveraging on word-of-mouth and viral marketing.

Dropbox vision to kill the “work about work”

The combination of scattered content, fragmented tools, and fluid team structures has led to decreased workplace productivity. According to a report by McKinsey & Company, knowledge workers spend approximately 60% of their time at work on tedious tasks such as searching for content, reviewing email, andre-sharingcontext to keep team members in the loop—what we call “work about work.” This means they spend just 40% of their time doing the jobs they were hired to do.

This is how Dropbox explains its mission to make work more efficient by eliminating the set of tedious tasks that make work inefficient and make people focus on things that matter.

Like any company that hit it big, Dropbox doesn’t have a simple mission, but an audacious goal. In Dropbox case that is about designing a more enlightened way of working. With an increasing number of people spending time on bureaucratic tasks (like sending emails, and compiling an internal audit report) the risk of creating a “work about work economy” is substantial. Thus, Dropbox mission is to help shape a work environment where people can focus on the critical things, that can contribute directly to the success of the organization.

Dropbox offers a set of plans to serve and cover several needs of its diverse customer base that spans from individuals to large organizations:

Dropbox also follows a freemium model dynamic where users can get up to 2GB of space for free. This free version has played a vital role in Dropbox ability to proliferate, with a set of viral marketing strategies.

Once the audacious goal and vision are set, it is critical to have also a set of core values that can steer the action toward those goals. Dropbox has five core values that are shared by its employees, and stakeholders, the so-called Dropboxers, summarized below:

One of the critical ingredients of Dropbox business model success has been its ability to drive organic growth which has been speeded up by viral adoption. Indeed, more than 90% of Dropbox revenues come from self-serve channels. In short, Dropbox used a significant outbound salesforce to succeed, but it instead leveraged on virality to grow. Its 500 million users have been representing a massive source of growth for the company.

This, in turn, has lowered Dropbox sales and marketing costs, and it allowed the company to scale up. Dropbox word-of-mouth and user referral marketing model have worked pretty well in its first phases of growth. Those channels though might stop working in Dropbox next stage of traction. For that matter, the company will need to structure a sales force able to sustain future growth. That change in Dropbox sales and marketing might impact on its future cost structure.

As of now though Dropbox can generate substantial growth via a few strategies.

As we’ve seen Dropbox business model is based on acquiring new users efficiently and at relatively low costs through three tactics:

By following the freemium model when users create a free account those same users often share and collaborate with other non-registered users.

Just like Spotify uses its free version its product as a significant funnel for conversions to paid subscription plans, Dropbox follows the same strategy and logic. When you have a free version of a product that goes viral marketing becomes the primary driver of growth. At the same time to guarantee the survival of the business usually the free version either gets supported by ads, it gets used as a funnel or both.

For instance, Spotify uses a business model where the free service is both an ad-supported service – that generates revenues – and a major funnel for the company that drives up new paid memberships.

Dropbox instead uses its free service version as a primary driver of paid signups. The company also profiles free signups to prompt them to become paid members based on a set of characteristics that include:

In most cases, conversion marketing requires a scale that allows running multiple experiments at once, and it will enable a company to track slight changes from several campaigns. This process enables Dropbox to adjust its target to convert free signups to paid ones.

Upgrade and expand the existing customers base

A cohort represents a group of people that share specific characteristics. In Dropbox case, the cohort is defined as the registered users who signed up for Dropbox in a given period. As pointed out on Dropbox prospectus:

Dropbox self-serve strategy is tied with a focused outbound sales effort targeted at organizations and prospects that once identified, are reached by the sales team to allow a wider-scale deployment. Indeed, while the self-serve strategy is great to convert users to paying customers, at the same time to allow larger deals to come in a sales force able to manage complex sales is critical.

Any organization has a set of key parameters that serve as a guide to measure financial success and long-term business performance and act based on the identified trends to make strategic decisions. Dropbox tracks three key metrics:

Paying users are defined as the number of users who have active paid licenses for access to Dropbox.

In 2017, Dropbox had eleven million paying users compared to almost nine million in 2016.

Average revenue per paying user, or ARPU, is given by the revenue for the period presented divided by the average paying users during the same period.

Dropbox follows a freemium pricing model that allows users to subscribe to the service in a seamless way. At the same time, the company has specialized in self-serve acquisition strategies based on word-of-mouth and viral marketing. Also, the company has specialized in conversion marketing strategies, which are focused on making free signups become paying customers or subscribe to larger packages.

How Does Spotify Make Money? Spotify Freemium Business Model In A Nutshell

Spotify is a two-sided marketplace where artists and music fans engage. Spotify has a free ad-supported service and a paid...