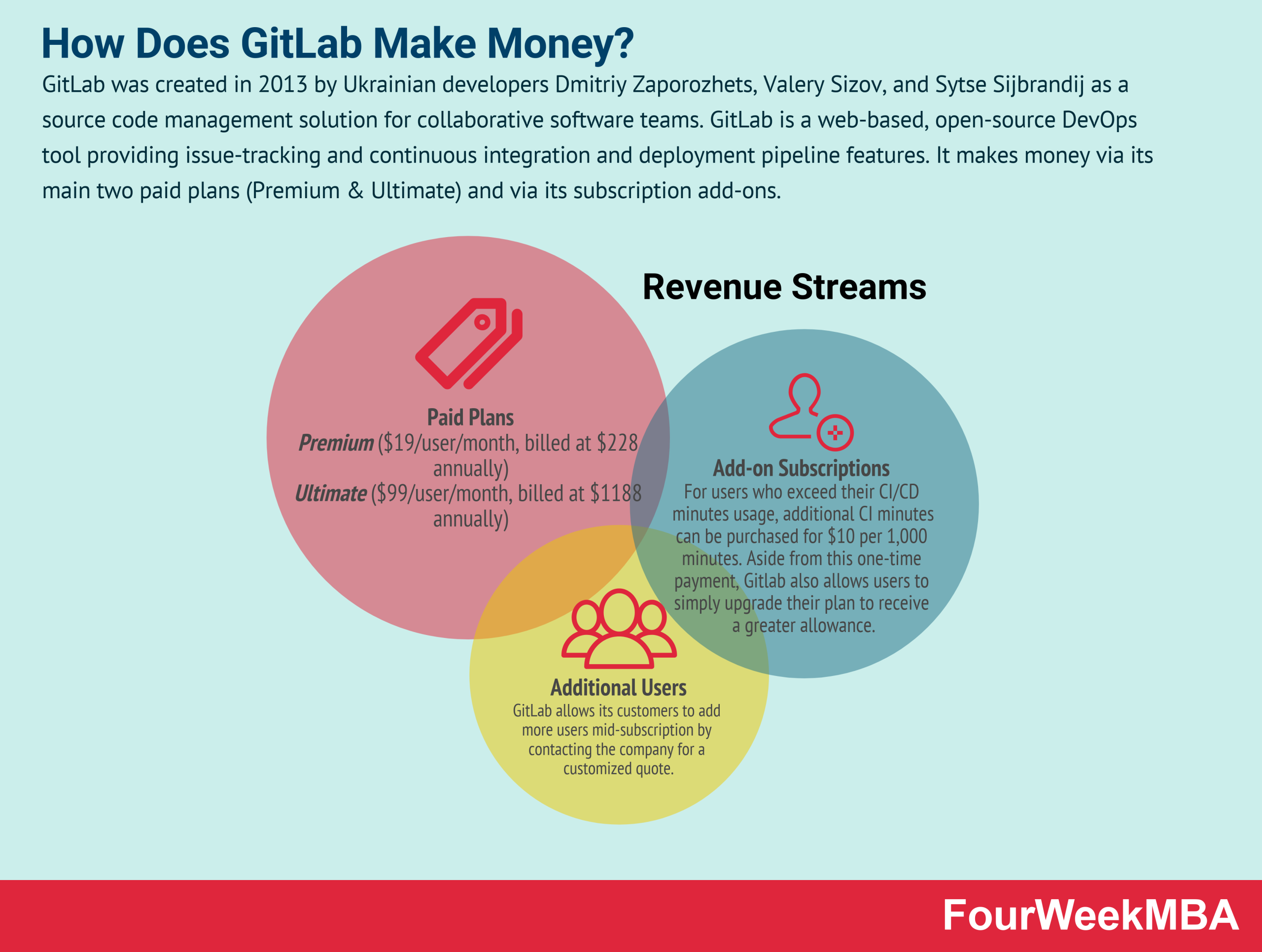 GitLab was created in 2013 by Ukrainian developers Dmitriy Zaporozhets, Valery Sizov, and Sytse Sijbrandij as a source code management solution for collaborative software teams. GitLab is a web-based, open-source DevOps tool providing issue-tracking and continuous integration and deployment pipeline features. It makes money via its main two paid plans (Premium & Ultimate) and via its subscription add-ons.

Today, the software incorporates an open-core development model. The core functionality is released under an open-source MIT license, but any additional functionality is subject to a proprietary license.

Gitlab has expanded aggressively since its founding in 2014, employing over 1300 team members across 67 countries. Last year, company revenue topped $150 million.

As the company explains in its financial prospectus:

We believe in an innovative world powered by software. To realize this vision, we pioneered The DevOps Platform, a fundamentally new approach to DevOps consisting of a single codebase and interface with a unified data model. The DevOps Platform allows everyone to contribute to build better software rapidly, efficiently, and securely.:

Therefore GitLab offers a one-stop DevOps platform to handle all software related activities and as the company further explains:

GitLab is The DevOps Platform, a single application that brings together development, operations, IT, security, and business teams to deliver desired business outcomes. Having all teams on a single application with a single interface represents a step change in how organizations plan, build, secure, and deliver software.

Its core, therefore, is to offer a single solution that combines development activities, operations, and security, in what’s defined technically as DevSecOps.

Why does it matter in the first place? DevOps platforms like GitLab are critical to development teams for the following reasons:

In short, GitLab prevents companies from using do-it-your-self DevOps, thus enabling them to use a single solution, to prevent tools fragmentation and enable continuous updates. Therefore, reducing the development cycle as a result of the above.

In this respect, while a DevOps platform like GitLab provides value to the whole organization, by enabling development teams to release features, and product updates much faster. On the other hand, its main stakeholders, are developers within the organization, and executives like CTOs (chief technology officers) and CIOs (chief information officers).

Since its inception, GitLab has been a fully remote company, and as of July 2021, it counted 1350 people in over 65 countries. This in turn helps the organization experience the challenges that DevOps teams across the world might have, to enable the platform to grow in that direction.

To make it clear to all how the company operates, over the years it built its own “corporate handbook” that went from a few hundred pages manual to a few thousand pages manual as of 2021:

The handbook itself is managed via the GitLab repository, stating in its opening lines:

GitLab recognizes that the Handbook is a critical part of empowering team members to do their jobs effectively. As such we have implemented a basic on-call process … to ensure that someone is available to assist team members in the event that something is broken in the handbook or if they are having trouble with making updates to it.

As Sid Sijbrandij highlighted back in 2016:

We ship GitLab CE which is open source and GitLab EE that is closed source. We try to be a good steward of the open source project. GitLab EE is proprietary, closed source code but we try to work in a way similar to GitLab CE: the issue tracker is publicly viewable and the EE license allows modifications.

Therefore, in short, the hosted service is open-sourced, while the software is closed:

The hosted service GitHub.com is free for open source projects and it has fundamentally improved open source collaboration. But the software GitHub’s service is based on is closed source.

And he finally remarked:

*As a sidenote to better understand this paragraph. Usually, in the digital/tech/software industry, there are open source and closed source players. The closed source is pretty much the old model, where you have proprietary software, owned by a company, which develops and monetizes on top of it. We don’t know what makes up that source code, as it’s fully controlled by the corporation (e.g. Google Search Algorithm, Facebook Social Graph, etc.). Then, you have the open-source organization, which usually builds the codebase (what makes up the core software) as a community effort, or also as the effort of a group of developers and then it releases to the world with an open-source license. The group of people that created the open-source code, usually give its ownership to a non-profit organization, while they also enable a corporation to be built on top of it, to monetize the open-source software, by adding premium/enterprise features (eg. WordPress/Automattic).

Therefore, the open-core business model claims to be an evolution of open source, where it combines funding features typical of startup land (usually open-core companies are venture capital-backed), and it leverages on open source, by offering a limited version of the platform or software, then offering premium features and add-ons as monetization strategies.

This piece from GitLab explains well the duality of its business model and how the company tackles it:

How does GitLab balance the open-source model with a proprietary one?

A set of promises are underlined by the company, summarized below

When a feature is open source we won’t move that feature to a paid tier.

We won’t introduce features into the open source codebase with a fixed delay, if a feature is planned to land in both it will be released simultaneously in both.

The open source codebase will have all the features that are essential to running a large ‘forge’ with public and private repositories.

All stages of the DevOps lifecycle (plan, create, verify, package, release, configure, monitor) will have some open source features.

The majority of new features made by GitLab Inc. will be open source.

The product will be available for download from a link above the fold on the desktop homepage without you having to submit an email address or sign in.

We will always allow you to benchmark the performance of GitLab.

We will make our Free tier easily discoverable.

Therefore, this is a sort of practical “Do Not Be Evil Manifesto” from GitLab. Intended as the foundational code of ethics to cooperate in an open source environment.

Gitlab follows the freemium model that is supported by a paid subscription service.

The free option is touted as providing a complete DevOps platform, but it does require that users provide their own CI runners and production environment.

For those desiring more functionality, there are two paid options:

For users who exceed their CI/CD minutes usage, additional CI minutes can be purchased for $10 per 1,000 minutes. Aside from this one-time payment, Gitlab also allows users to simply upgrade their plan to receive a greater allowance.

For those desiring more storage space, Gitlab offers 10GB for an additional $60. It should be noted that this charge is an annual, recurring subscription regardless of the data used.

GitLab also offers special pricing in the form of a free Ultimate license to eligible:

GitLab allows its customers to add more users mid-subscription by contacting the company for a customized quote.

The cost of adding extra users is pro-rated from the date of the quote or purchase through to the end of the subscription period.

Alternatively, customers can use the GitLab True-Up model to add additional users. In this case, a company that has grown from 100 to 300 users can renew on a 300-user plan while also paying a full annual fee for the 200 extra users it added.

Read Next: How Does GitHub Make Money?