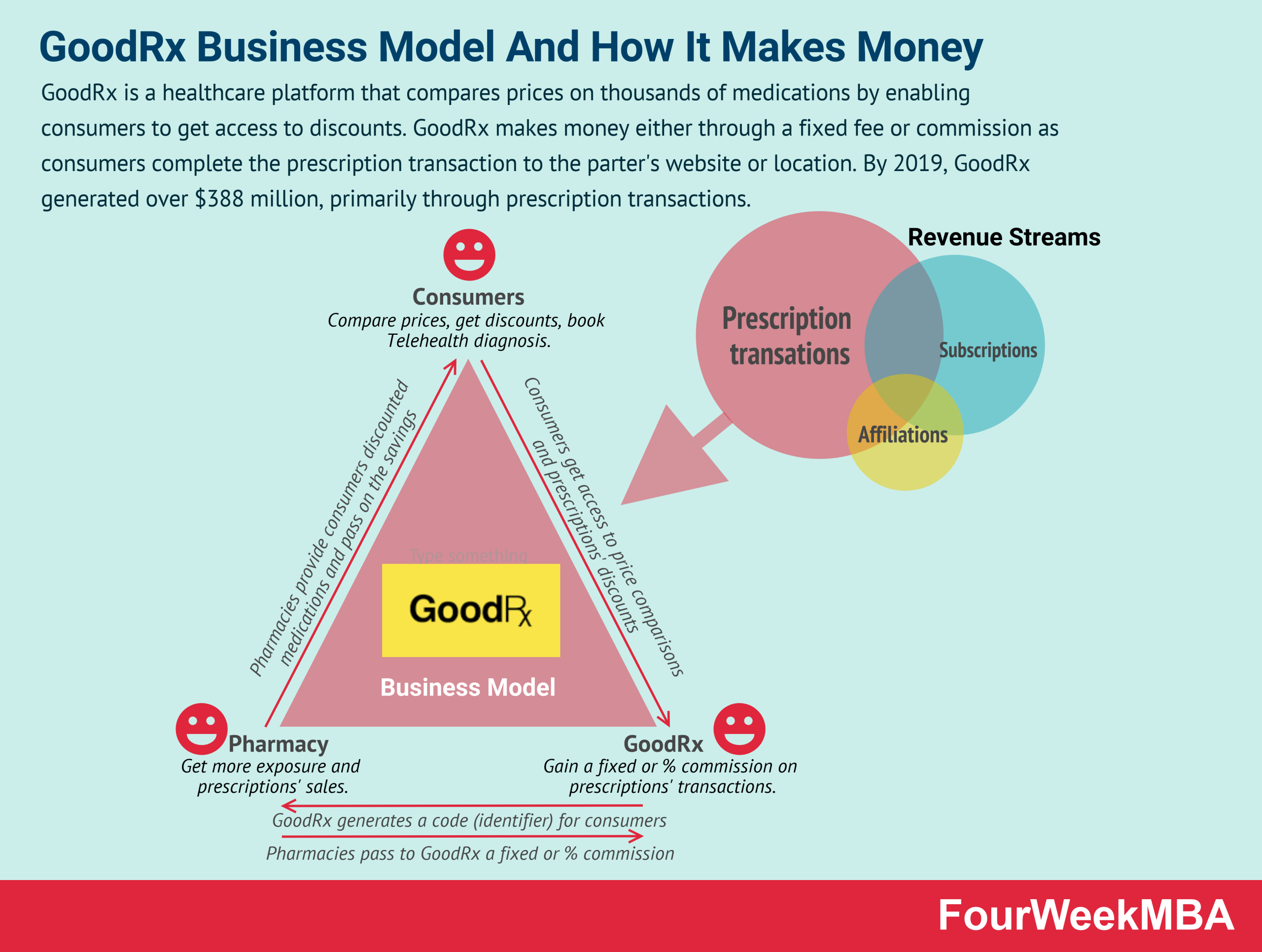 This sort of advice would be strange, if it wasn’t for the fact that is an all American story.

The complexity, opacity, and expansiveness of the healthcare system only became much more vivid as the GoodRx co-founders grew up. Doug Hirsch recounts of a specific experience back in 2010, when with prescription in hand and good health coverage, he still could not find a uniform and affordable prescription.

As he walked across several pharmacies, he realized that the healthcare market was just like any other industry. Prices would change slightly from one place to the other, with the difference though that the system’s complexity and opacity stood on the shoulders of American people who could not afford that.

From there, GoodRx was created. Whether or not the story is apocryphal, this is the story of a company that managed in a few years to become a leading platform that connects several key players in the healthcare space, offering a single, simplified interface to consumers.

While this might seem just a digital platform, in reality, the final interface (shown primarily as a price comparison tool) underlies key partnerships in the healthcare space, from healthcare providers to healthcare professionals and consumers. From this balance, this business model exists.

GoodRx mission is to “help Americans get the healthcare they need at a price they can afford.”

This mission has been executed by the company’s digital platform, which goals is “to solve the challenges that consumers face in understanding, accessing, and affording healthcare.“

From its beginnings as a price comparison tool for prescriptions, the platform expanded to offer several services (from prescriptions to Telehealth, and additional healthcare services).

GoodRx claimed guiding principle is that “of doing well for consumers and the healthcare industry as a whole.”

But how big is GoodRx potential market? How does its business model and distribution work? And how does it make money?

In its S-1 GoodRx estimates its total addressable market (TAM), in around $800 billion ($524 billion for prescription opportunity, $30 billion in pharmaceutical manufacturer solutions and $250 billion for telehealth).

It’s important to remark that the TAM is a highly speculative number, based on estimates and assumptions of how the market will evolve in the coming years. The TAM is a way for companies to show their potential opportunity in the future.

The assumption of this opportunity is based on GoodRx’s firm belief that consumers (thanks also to the web) have become more informed, and cost-conscious. That is why the market entry strategy that GoodRx used was thorough its price comparison tool. This was the entry point that enabled the company to grow and expand to several other areas and services (the latest move was in 2019 when GoodRx acquired HeyDoctor, the platform that would enable the company to further expand in the telehealth industry).

To understand GoodRx’s opportunity, it’s also important to start from the problems it solves and for whom they get solved.

The American healthcare system is among the most complex ones, and many US citizens feel the pressure of having a good health insurance coverage if they want to guarantee a good lifestyle for themselves and their family in the long run. Indeed, for one thing, there is a trade off caused by the US healthcare system.

The health-related expenses not only are a continuous worry for most people in the US (unless of course, you have good coverage), many more ignore it altogether as they can’t afford to have it. The complex, expensive, and opaque nature of the healthcare American system has opened up massive opportunities for digital platforms.

As a consumer-facing platform, GoodRx has not only to provide a good service to a large number of potential patients, but it has also to attract healthcare professionals and companies to be present on the platform. This creates a three-sided marketplace with three core players/partners/stakeholders:

By balancing out the value propositions for these three players the marketplace tries to build a win-win-win experience for all.

How the GoodRx business model and platform work

Let’s dive into each part of the platform to understand its business model.

This is where it all started. GoodRx entered the market as a price comparison tool for prescriptions. Over the years, the company developed a proprietary technology, which as of 2020 aggregates over 150 billion prescription data points from many sources.

This data gets curated and presented back to consumers in the form of services on the platform, accessible on its mobile app, or website for free.

This is the GoodRx’s pricing comparison workflow:

Where does GoodRx collect that data for its platform? Primarily through pharmacy benefit managers (PBMs), other sources include Pharmacies, Mail Order Pharmacies, Pharmaceutical Manufacturers Patient Assistance Programs, and Medicare.

By 2017, GoodRx launched its first subscription service, called Gold, and by 2018, it also launched Kroger Savings:

GoodRx partners up with pharmaceutical manufacturers to advertise their solutions on the platform, while offering discounts to consumers which are eligible to those.

Telehealth has been among the fastest-growing industries in the healthcare space. Indeed, GoodRx launched in 2019, its Telehealth platform, HeyDoctor, coupled with the GoodRx Telehealth Marketplace, the aim is to attract third-party providers and expand the services offered on the platform.

GoodRx through HeyDoctor and its marketplace has both in-house healthcare providers and third-party providers. This offering well integrates with the prescription services. As consumers browse and find a healthcare professional on the platform, together with the diagnosis also a prescription might be matched:

Each tech company has a model that it follows which is built-in into its technology and that also comprises the philosophy of the organization. As a discovery, comparison platform whose goal is to enable variety, information and lower prices on medications, GoodRx follows these “technological principles:”

But how does GoodRx make money?

Prescription revenues (fixed and % based)

Most of the revenues (94% in 2019) come from prescriptions. In short, as consumers on the platform receive discounts, they get a code generated by GoodRx, this code identifies the consumers, which ones finalized the initial purchase and the subsequent ones it generates a commission on the sale for GoodRx.

For any platform, the key success element is to master the repeat transaction. And for GoodRx over 80% of transactions came from repeat prescriptions. The nature of this kind of transaction, where the consumer will either refill the existing prescription or fill a new prescription, makes the earnings of GoodRx stable and growing over time.

Indeed, once the code has been generated for the consumer, as more orders are placed those are traced back to the code, and the commission or fixed fee is paid back to the platform.

Other revenues come from subscription offerings (Gold and Kroger Savings), pharmaceutical manufacturers/affiliates (advertising revenues), and Telehealth offerings. All in the US.

We’ll look at three key items that make up the cost structure of GoodRx, from the cost of revenues, or what it takes to deliver the service in the first place, to product development (R&D) and sales, marketing and distribution:

Organic channels comprise the traffic generated on the GoodRx website and apps. While viral growth comes from word-of-mouth coming from consumers referring friends and family, healthcare professionals and pharmacists, and press coverage which drives traffic back to the website and apps.

TV: GoodRx advertises on both traditional linear television as well as through digital streaming.

Content is an essential part of the platform and a website that brings in millions of organic visits per month. That is why the platform produces a continuous stream of content.

Below a few examples of how consumers get to know the GoodRx platform: