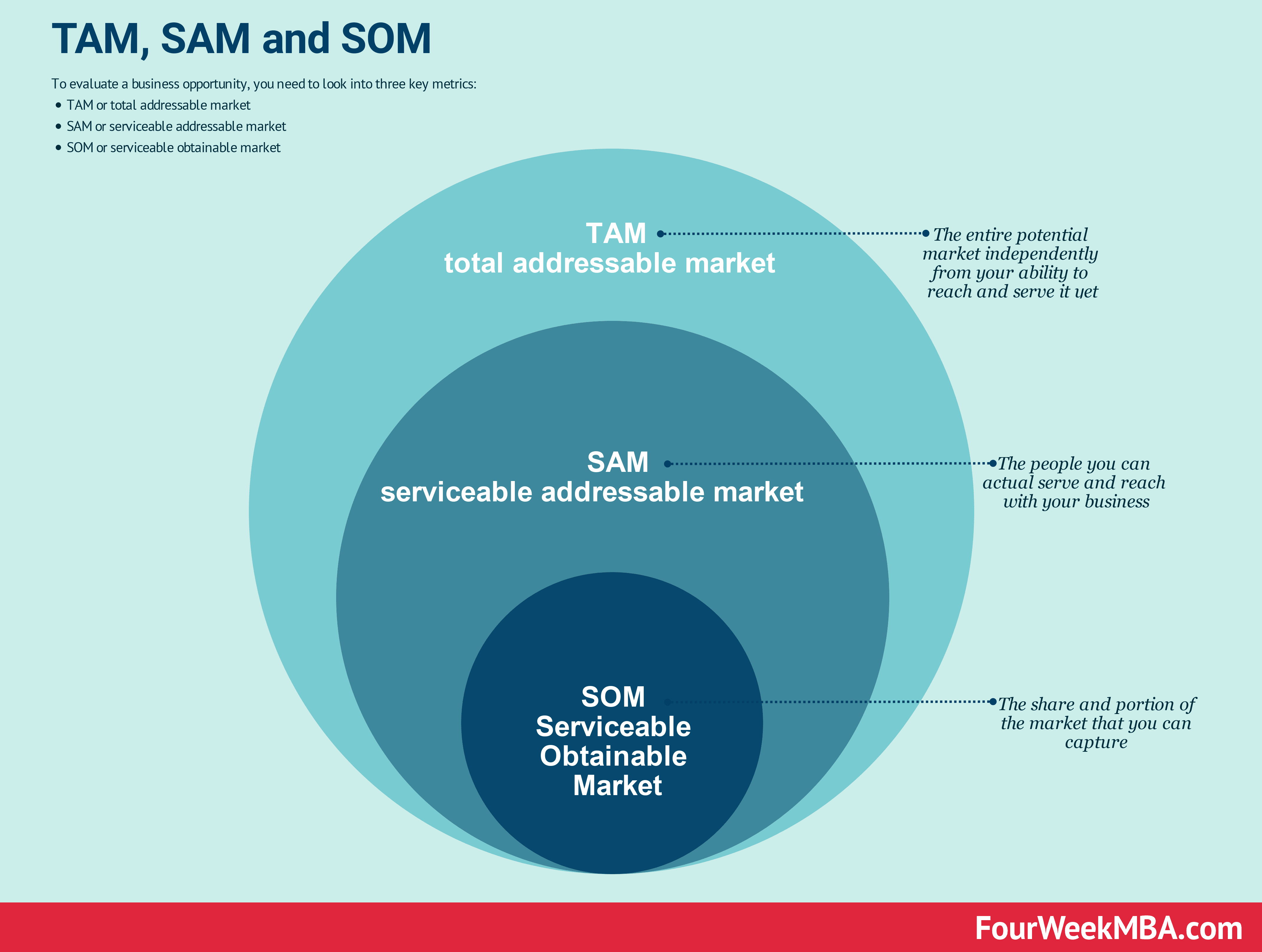 A total addressable market or TAM is the available market for a product or service. That is a metric usually leveraged by startups to understand the business potential of an industry. Typically, a large addressable market is appealing to venture capitalists willing to back startups with extensive growth potential.

TAM, SAM, and SOM in a nutshell

When launching or running a business, at the question “who’s your target?” it often happens to hear answers like “everyone can use my product or service.”

This implies a complete misunderstanding of the market. This can be bad for several reasons.

First, it might make it harder to prioritize and focus on a few key partners who might help the business snowball and scale. For instance, when PayPal launched as pointed out by Reed Hoffman in Blitzscaling the company had to shift its focus four times in a short period.

When they identified their power users on eBay, they focused and prioritized on that niche market. Thus, PayPal first dominated that niche and then move forward.

Second, if you need external resources, such as lending and financing being able to present the total addressable market (TAM) is a crucial element to make the value proposition for those investing in your business compelling enough.

For that matter, a few crucial questions, such as who needs your service, how much can I charge for it, and what players are already in that market helps to find a few elements to compute the TAM.

To evaluate a business opportunity, you need to look into three metrics:

Let’s start with a practical and straightforward example. Imagine the scenario you’re opening a barbershop in Rome. Now your TAM might be any man in the world with a beard. However, of those how many can you reach and service?

It would also be great to say that your total serviceable addressable market is those men’s beards. However, this is not realistic. Instead, to be realistic, you might start from the neighborhood where your barbershop will be located.

This means that on a population of a hypothetical thousand people in the neighborhood, only 50% are men and of those men, only 50% have a beard.

This means your total serviceable market is now only two-hundred-fifty men (a thousand divided by two, twice). Yet, you’re not the only barbershop in the neighborhood. It seems like another person had your same idea, and her barbershop serves already half of those men’s beards.

This means that your potential share of the market might be 50% of the serviceable market, or a hundred and twenty-five people. This is your SOM.

Although this is a simplified example, that is a good starting point to understand the difference between TAM, SAM, and SOM. You don’t need to perform complicated analyses to start understanding those concepts. All you need is to start thinking in realistic terms who’s that you’re trying to serve!

Thus, guessing the potential market size, especially in growing or rising industries is a critical point for most investors.

For instance, this is how Pinterest defined its total addressable market in its S-1: