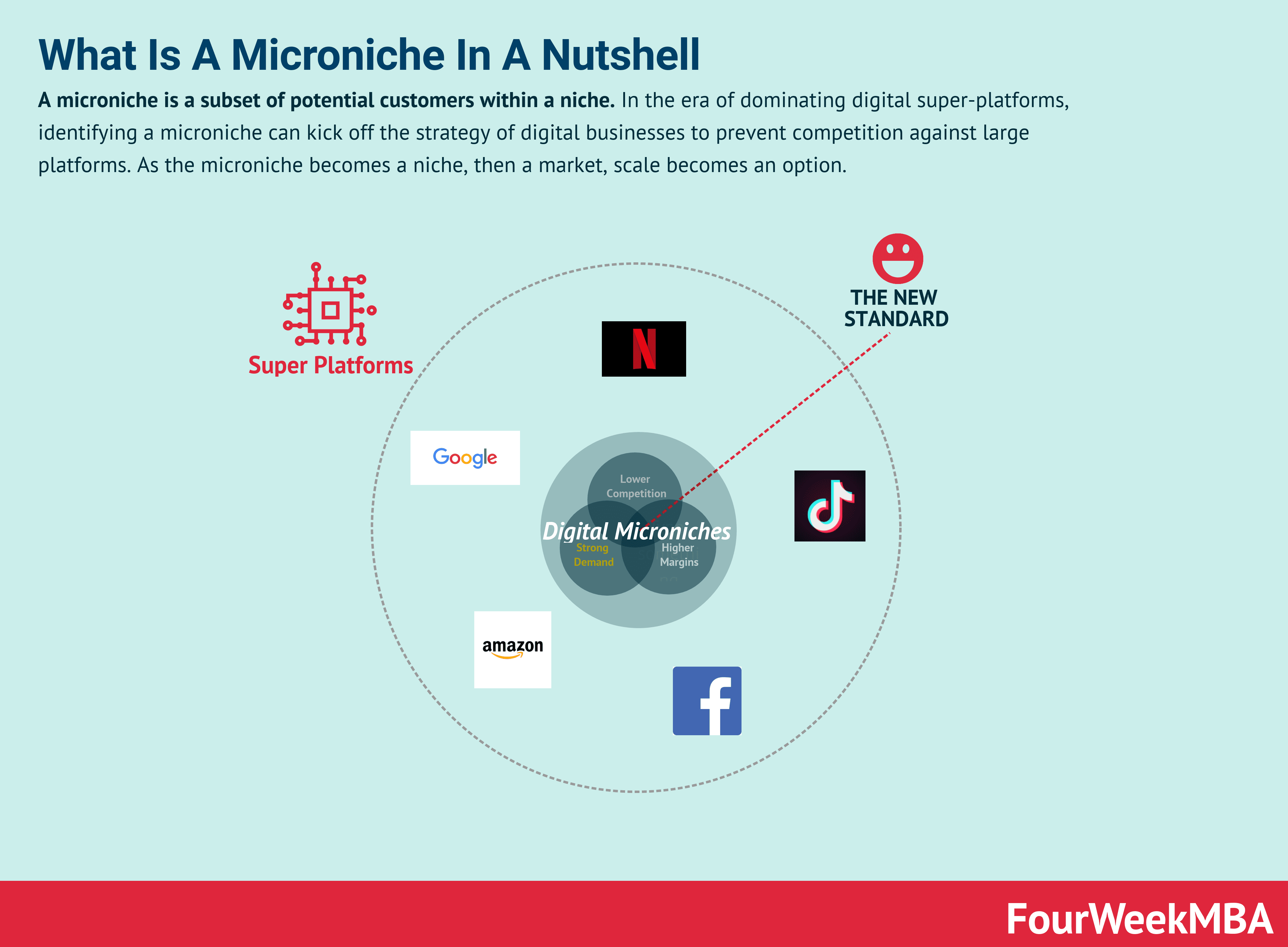 A microniche is a subset of potential customers within a niche. In the era of dominating digital super-platforms, identifying a microniche can kick off the strategy of digital businesses to prevent competition against large platforms. As the microniche becomes a niche, then a market, scale becomes an option.

There used to be a time when starting a business in a new space implied a market big enough which we called a niche.

Amazon, for instance, did just that. When it didn’t know whether the internet would prove the proper distribution channel and a new way of doing business. Rather than build an e-commerce selling anything. It started from a specific niche: books.

When it finally proved that e-commerce was a viable business model. Amazon expanded its selection. First in adjacent niches. Then in larger and larger niches. Until it reached a critical mass. And it stopped being e-commerce and it became a platform driven by a powerful flywheel and network effects.

As those digital tech giants like Amazon and Google were among the first to dominate the digital space. They were also the ones that now have the most control over the distribution of content and the purchases made over the internet (in the western world).

As new platforms that emerged throughout the first decade of the 2000s, like Facebook, Twitter and Instagram, the media industry got more and more consolidated into the hands of a few players, with an incredible grasp for digital business modeling.

Those new models implied a few key changes, which made digital businesses move:

It also made it possible for the same digital platforms to reach billions of users across the world. Thus redefining the concepts of niche marketing and market segments.

Therefore, if you’re starting a business today you need to make sure to identify a potential target, by being as specific as possible.

Indeed, generally, micro niches represent a small part of potential customers within a broader niche, and while niches do have advantages, micro niches present even more opportunities in the short run. Some of them are:

How do you pick a microniche?

Let’s start from a simple example. Let’s say you’re opening up a bookstore, looking for opportunities to kick off the store.

Where do you start?

The platform with the most data when it comes to books is definitely Amazon. You start from the Amazon broadest categories to start looking for opportunities:

There was a time when it was possible to stop there. As the web was not such a crowded space for you to start a business. However, nowadays you need to a lower level to look for your microniche.

Thus, saying something like “I’ll start from literature, or historic fiction” isn’t enough. Those are too broad. So where do you start?

Go a level down:

Within Amazon‘s literature and historical fiction, we can identify a further category for us to start with. For this example I took something like “historical fiction” and went a level down:

I selected for instance, “Reinassance” as the key area within the micro-target I’m picking to kick off my business distribution strategy.

Within that microniche you can see how the bestseller has quite some substantial reach:

The interesting thing is that what it might actually seem a very small audience it turns out to be a decent audience for a business which is starting out.

Indeed, by crossing the data from Amazon to the keyword volume for the book’s author “Johanna Lindsey” you can see how she is a micro-celebrity:

Example of how a microniche analysis uncovers the audience around a micro-celebrity and it opens up opportunities to kick off your business distribution (data: SEMRush)

It is interesting to notice how we uncovered a potential audience made of over four thousand people each month, by just doing simple research on Amazon and by crossing that with keyword volume.

Thus, if you were to start a bookstore in that category you might want to make sure to have all the books of that author available, create a content strategy around it.

And for instance, invite the author for an off-line session with her fans. While for instance, also transmitting that live online so that you can reach a wider audience and create the first set of loyal customers for your bookstore!

As the web has become a crowded space, plenty of businesses which serve any kind of niche. Gaining traction in this scenario has become quite expensive. Therefore, it is important to identify a micro-niche, to kick off your customer base, and make you recognized among your potential customers.

A micro-niche has several advantages. Such as higher margins, better brand recognition and potentially a deeper connection with a smaller audience.

Thus, if you’re starting a business today you might want to start from identifying your micro-niche!