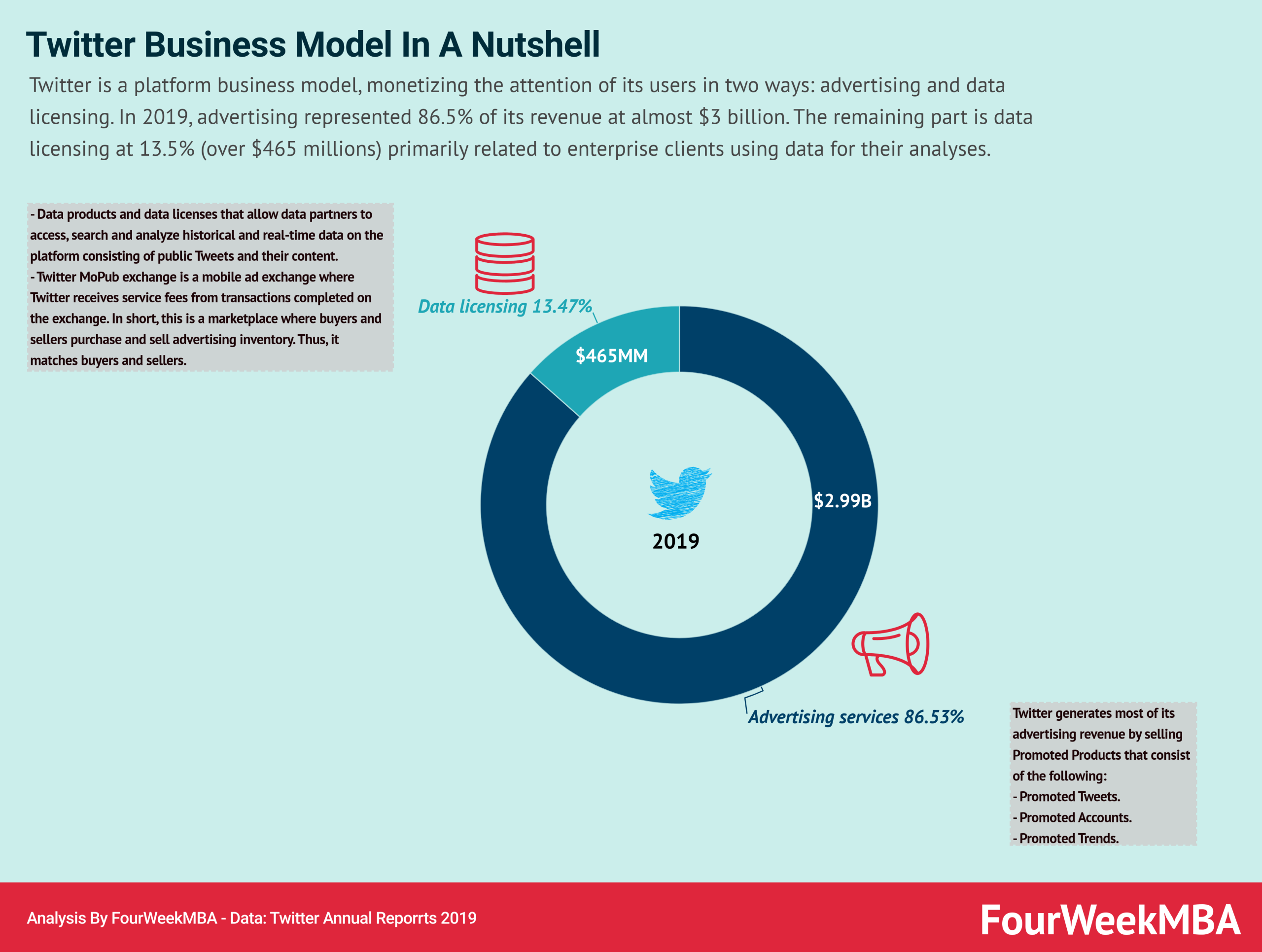 Twitter is a platform business model, monetizing the attention of its users in two ways: advertising and data licensing. In 2019, advertising represented 86.5% of its revenue at almost $3 billion. The remaining part is data licensing at 13.5% (over $465 millions) primarily related to enterprise clients using data for their analyses.

Odeo was a directory and search destination website for podcast publishing and aggregation. It was 2006 and the company was feeling the pressures of other giants at the time (Apple) were also competing for the same space.

Therefore, the founders of Odeo, decided it was time to “reboot” the company to move in a new direction.

Back in 2000, inspired by early blogging pioneer LiveJournal, Jack Dorsey thought about a service in which posts appeared in real-time and “from the road.”

As they broke the company’s in teams to brainstorm new ideas and figure out what to do next. In a brainstorming session, Jack Dorsey represented his idea to the other team members about “a service that uses SMS to tell small groups what you are doing.”

That idea made sense, so much, that by March 2006, a first test started out.

It was March 2006, Jack Dorsey was just setting up the idea he had brainstormed, which would initially be called twttr.

As the story goes, Evan Williams, Jack Dorsey and Biz Stone, who co-founded the company at the time knew they “wanted to have this instant mobile, SMS, tech-space thing,” and twitter (which referenced nature, as twitter is the sound that birds make) was the perfect name they had in mind.

However, a bird enthusiast already had registered the name twitter.com. So they had to use initially twttr.com. After six months from the project launch they finally managed to get the domain twitter.com which would stick to these days.

The group could not easily explain the value of this new project to Odeo’s board, as the company was losing ground. Thus, eventually a new corporation was set up just to manage the twttr project.

As the project launched, six months in, Jack Dorsey was one of the engineers working on what would be finally rebranded as Twitter.com. The interesting part though, people could not still get the value of a platform that enabled those SMSs when they still paid for them.

In short, at the time, tweeting something, meant having the phone billed for messages that conveyed what one was doing in that moment. For how entertaining it might be, it was not convenient.

To make things worse, there was no character limit, thus a long message would be split in multiple messages, which would only make the phone bill go up.

So the team figured, they needed to change the anatomy of the message. Indeed, to fit into what, at the time, was the character limit for a message (160), the Twitter.com team set the limit at 140 characters, so users had “room for the username and the colon in front of the message.”

From there, the official tweet was born (the character limit would be expanded only a decade later, from 140 to 280).

The Twitter’s team was the main advocate of the platform, and Jack Dorsey would show the power of the tweet as a way to express opinions about the world, in a powerful way:

While Twitter was growing very quickly, its platform wasn’t stable and Jack Dorsey wasn’t considered able to stay in the CEO’s position. And by 2008, Dorsey had to leave the CEO position (kicked out from Twitter, in 2009 Dorsey would found Square).

Nonetheless, Twitter kept growing in 2009. That was also the year, when Facebook had passed Myspace in traffic. By 2009, Twitter’s popularity grew at the point that celebrities like Ashton Kutcher, Britney Spears, Ellen DeGeneres, Barack Obama, and Oprah Winfrey all joined the platform.

By the end of 2010, the platform had more than 160 million users, and it started to monetise through ads. This model would stick, even though Twitter would become really profitable only by 2017-18.

In 2015 Jack Dorsey would return as Twitter’s CEO, splitting his time between Twitter and Square, ever since.

Twitter generates most of its advertising revenue by selling Promoted Products that consist of the following:

Labeled as “promoted,” appear within a user’s timeline, search results or profile pages just like an ordinary Tweet regardless of device, whether it be desktop or mobile. Using its proprietary algorithms, Twitter tries to understand the interests of each user and deliver Promoted Tweets that are intended to be relevant to a particular user. Promoted Tweets are pay-for-performance or pay-for-impression, priced through an auction

Promoted Accounts, labeled as “promoted,” provide a way for advertisers to grow a community based on pay-for-performance advertising that is priced through an auction

Promoted Trends, labeled as “promoted,” appear at the top of the list of trending topics or timeline for an entire day in a particular country or on a global basis. Promoted Trends are sold on a fixed-fee-per-day basis

Data Licensing and Other

Data licensing and other revenues comprise:

That allows data partners to access, search and analyze historical and real-time data on the platform consisting of public Tweets and their content

This is a mobile ad exchange where Twitter receives service fees from transactions completed on the exchange. In short, this is a marketplace where buyers and sellers purchase and sell advertising inventory. Thus, it matches buyers and sellers

In 2019 the company made over $2.9 billion from advertising services alone.

Also, if we compare those numbers with Google and Facebook advertising revenues, we can understand the proportion of Twitter digital advertising cake back in 2018.

Each company has a few critical metrics to monitor on a daily, weekly and monthly basis. Those are the metrics Twitter looks at for the success of its business:

To keep the technical infrastructure up and running the company spends money in data centers for co-located facilities, lease and hosting costs, and traffic acquisition expenses (to enable the advertisement placed on Twitter to be shown on third-party publishers’ websites). The company spent over $1.1 billion in 2019 (33% of its revenues).

To keep the whole infrastructure and company evolve over time, Twitter also spends money in product development, engineering and research. In 2019, Twitter spent $680 million in R&D.

Companies like Facebook and Twitter for years have been treated as communication platforms (at least in the US). That means that as they act as companies enabling communication  but not the ones officially publishing it, it gave them wide space to let their platforms develop freely.

As the recent debate showed, if Twitter would be treated as a publisher, thus the one liable for all the offensive content published on it, this would also completely change its business model and the potential liabilities coming with that.