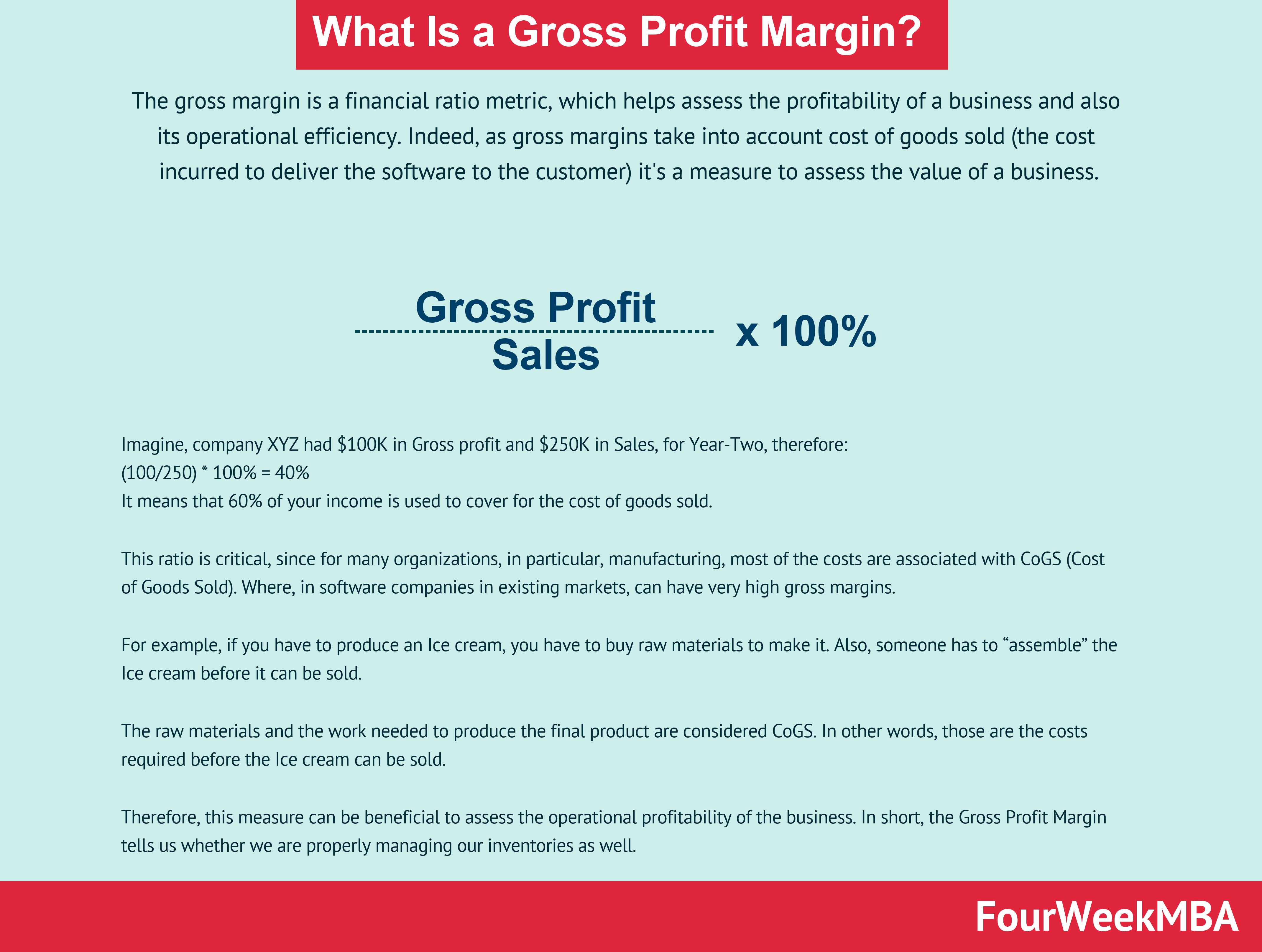 The gross margin is a financial ratio metric, which helps assess the profitability of a business and also its operational efficiency. Indeed, as gross margins take into account cost of goods sold (the cost incurred to deliver the software to the customer) it’s a measure to assess the value of a business.

Gross margin in a nutshell

This is the relationship between Goss Profit and sales, and it is expressed in percentage:

Imagine, company XYZ had $100K in Gross profit and $250K in Sales, for Year-Two, therefore:

It means that 60% of your income is used to cover for the cost of goods sold.  This ratio is critical, since for many organizations, in particular, manufacturing, most of the costs are associated with CoGS (Cost of Goods Sold).

For example, if you have to produce an Ice cream, you have to buy raw materials to make it. Also, someone has to “assemble” the Ice cream before it can be sold.

Well, the raw materials and the work needed to produce the final product are considered CoGS. In other words, those are the costs required before the Ice cream can be sold.

Therefore, this measure can be beneficial to assess the operational profitability of the business.

David George and Alex Immerman, partners at the venture capital firm a16z highlighted, “A high gross margin is a preferred business feature. Higher gross margins allow for more percentage points of revenue to be spent on growth and product development.”

This is a critical element to understand, as software companies, while usually carrying higher gross margins than traditional organization, more focused on physical infrastructure.

Those same software companies’ products also might become outdated quickly, as technology evolves. In addition, in order to distribute a software and enable its continuous growth, it requires massive investments in marketing and sales.

For instance, Salesforce, among the most valuable software companies, in terms of market cap, by 2020 spent more than 46% of its revenues in sales and marketing. Compared to 25% in total for cost of goods sold, and 16% for product research and development (FourWeekMBA Analysis).

As David George and Alex Immerman, further pointed out “higher gross margins also tend to translate to higher cash flow margin, and in a world where ‘how much runway do you have’ has become a (if not, the) preeminent question, cash is paramount. For these reasons, high gross margin companies typically have higher revenue multiples than their low gross margin counterparts.“

As Fred Wilson, from AVC pointed out in “The Great Public Market Reckoning,”

If you look at the class of companies that have come public in the last twelve months, many of the stocks that have performed the best are software companies with software margins. One notable exception to that is Beyond Meat.

He mentioned examples like Zoom, Cloudfare, and Datadog. Where other companies, like Uber, Lyft and Peloton were losing value. In short, he pointed out how in times where investors are more risk averse gross margins become secondary.

However, where there is more market risk aversion, gross margins become extremely important.

David George and Alex Immerman also point out how looking at gross margins alone is misleading, as it makes you forget what really drives business value.

As they further point out “business quality is about defensibility. Defensibility comes from moats.”

In short, if a company is focusing on higher gross margins at the expense of business defensibility that might over time translate in lost of competitiveness of the business.

As they pointe out, companies like Apple, Walmart, Netflix and others, have much lower margins compared to software companies, and yet, those are among the most valuable brands in the world.

But what makes up a moat? There are several ways to build moats and some of them are:

Those factors combined are all part of your business model recipe, and it often becomes evident only in hindsight. And it takes years to build. What’s left is a lot of business experimentation, a strong long-term vision.