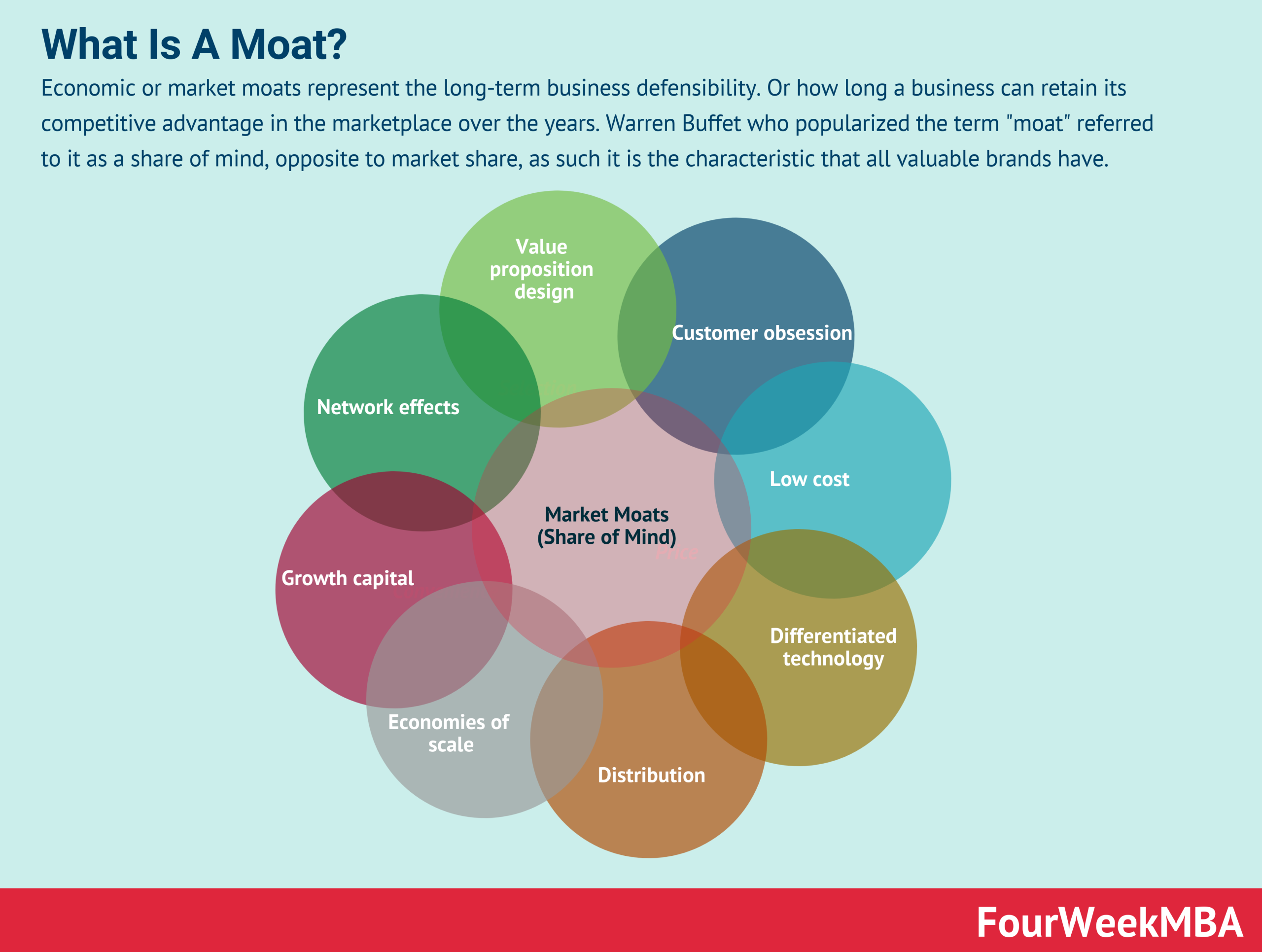 Economic or market moats represent long-term business defensibility. Or how long a business can retain its competitive advantage in the marketplace over the years. Warren Buffet who popularized the term “moat” referred to it as a share of mind, opposite to market share, as such it is the characteristic that all valuable brands have.

The father of economic moats

In a speech to MBA students, Warren Buffet highlighted what a moat is about.

Warren Buffet kept highlighting how the business staid the same over a long period of time, “…since 1886 or whatever it was and it’s a simple business, it’s not an easy business I don’t want a business that’s easy for competitors so I wanted a business with a moat around it.”

And he went on defining moats as castles administered by hardworking and capable dukes (its managers), “I want a very valuable castle in the middle and then I want a duke who’s in charge of that castle to be honest and hardworking and able.”

Then finally he gives some examples of moats in several industries, “…I want a big moat around the castle and that moat can be various things the moat in a business like our auto insurance business at Geico is low cost, I mean if people have to buy auto insurance so everybody’s going to have an auto insurance policy per per car basically for driver and and I can’t sell them 20 you know but but they have to buy one what are they going to buy on they’re going to buy on based on service and cost.”

Moats are not market shares

While many do associate moats with market shares, Warren Buffet highlighted “if you’ve got a wonderful castle (referring to moats) there are people out there going to try and attack it and take it away from you and I want a castle that I can understand but I want a castle with a motor on it.”

Yet moats have something more. Valuable brands do not only take market shares, they gain market shares as a result of something else, which Warren Buffet calls “share of mind.”

When explaining the Kodak’s case, Warren Buffet highlighted, “30 years ago Kodak’s moat was was just as white as coca-cola smoke…they had what I call share of mind. Forget about share market…they had something and everybody’s mind around the country around the world with a little yellow boxing ring that said Kodak is the best, that’s priceless.”

Warren Buffet kept highlighting, how Coca-Cola (one of his favorite brands and portfolio companies, had just that.

You can’t see the moat day by day but every time you know the infrastructure gets built in some country that isn’t yet profitable for Coke but will be 20 years from now. The moat is widening a little bit that things are all the time changing that moat in one direction other ten years from now you can see the difference. our managers are the businesses we run I’ve got one message to them you know which is the widening moat.

Below an example of what Warren Buffet has in mind. As explained, in the Coca-Cola system, as the company enters new markets, as a go-to market strategy, it will control most of the operations.

Yet, once operations have been established, Coca-Cola divests, and it follows a franchising model, where it holds control over its franchisees as the company is the sole distributor of the product, and by keeping some equity invested.

I redefined this model, franchained.

This is an example, of how Coca-Cola combines branding, distribution, operational and financial efficacy, as it enters new markets, while retaining its brand’s “share of mind” as it keeps scaling its operations.

Market moats are about business defensibility

David George and Alex Immerman, partners at venture capital firm, a16z, when talking about gross margin, they pointe out how those alone are misleading. And it all goes back to what really drives business value.

As they further point out “business quality is about defensibility. Defensibility comes from moats.”

In short, if a company is focusing on higher gross margins at the expense of business defensibility that might over time translate in loss of competitiveness of the business.

But what makes up a moat? There are several ways to build moats and in many cases, depending on the market contexts a moat will come from the mixture of several elements.

Market moats is about the brand and the share of mind

One of the most powerful business defences is the brand, or the direct access to your customer base. For instance, if you take Facebook, it’s still among the most valuable websites on earth, because people recognize its brand.

There is no intermediary, people access their Facebook app, or go directly on the Facebook login page. This is critical, as over time it defends against disintermediation.

If, let’s say, Facebook depended solely on traffic coming from Google, the day Google had launched its social network, it would have killed Facebook.

Yet, as the product and brand was recognized and people got straight to the source, it didn’t need any intermediary.

If you take the case of Amazon, over the years it has had a relentless focus on low price, convenience, variety, and great delivery, in a mixture, they defined “customer obsession.”

This built-in low price, convenience and variety took years to build, and in Amazon’s case that was a combination of operational model: inventory facilities and systems; financial model: Amazon gave up profitability for free cash flows), customer modeling (through its e-commerce, Amazon could know exactly what customers wanted); and business experimentation: Amazon launched many failed products that it thought customers would be excited about.

Among those failed launches though, it also came up with things like Amazon Prime and Amazon AWS, which are among the most successful parts of the business.

For players in industries where the products offered are mostly undifferentiated, moats are created by economies of scale combined with low costs.

As Warren Buffet explains in his speech about moats, an insurance business like Geico, a lot of defensibility comes with offering lower prices.

In a software world where hundreds of new products are launched to market everyday, building up differentiation (in terms of features, technology, and value proposition) is a key element.

While strong products and brands can draw directly from their user or customer base. Having a strong distribution network is also a key element.

As highlighted in the Google TAC and if we look at the costs associated to the money invested into distribution of some of the most valuable brands, this goes in the multi-billion dollar mark.

This is one of the elements of creating market moats.

In periods of economic expansion, when capital becomes available for companies to expand in riskier markets, those companies give up efficiency to gain scale.

This sort of blitzscaling mode can help companies gain market shares quickly, in markets that are new, but are becoming hot from an investing standpoint.

Those players able to open the market, and retain it, might become long-term dominators. This risky game, however, is good as long as the economy keeps expanding, and the growth capital is available for the company burning cash at fast speed.

If, by luck, good timing, or continued growth, the company is able to sustain this mode of aggressive growth, a competitive advantage can be created.

Examples of this are companies that are opening up new markets, that are still yet to be defined (take the Uber case).

This is true for platform business models. Where in economies of scale the company gains in efficiency and profitability as it grows (it lowers its per cost unit). In network effects, the platform becomes more valuable as its per user value grows as more users join (beware of negative or reverse network effects).

Understand what’s the killer use case that makes your product valuable in the hands of several types of customers is another key ingredient.

While this might go beyond the engineering world, and as such it might seem more foggy, it is though one of those elements that make a long-term difference.

In short, are you willing to test, and experiment with your product to find value propositions that fit the market? If so, you product will evolve contextually, to create moats.

Those factors combined are all part of your business model recipe, and it often becomes evident only in hindsight. And it takes years to build. What’s left is a lot of business experimentation, a strong long-term vision.