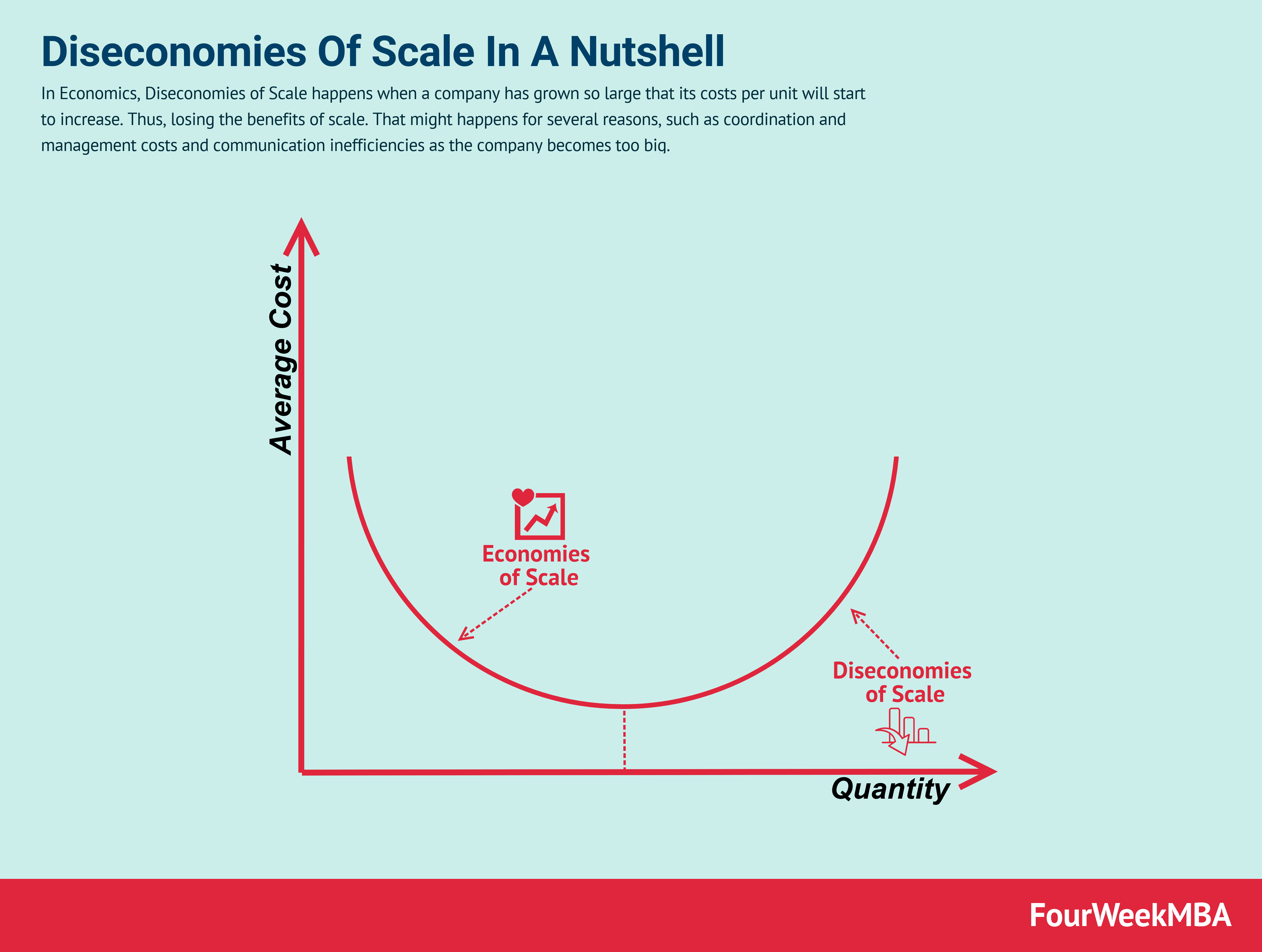 In Economics, a Diseconomy of Scale happens when a company has grown so large that its costs per unit will start to increase. Thus, losing the benefits of scale. That can happen due to several factors arising as a company scales. From coordination issues to management inefficiencies and lack of proper communication flows.

Difference between economies and diseconomies of scale

In Economics, Economies of Scale is a theory for which, as companies grow, they gain cost advantages. More precisely, companies manage to benefit from these cost advantages as they grow, due to increased efficiency in production. Thus, as companies scale and increase production, a subsequent decrease in the costs associated with it will help the organization scale further and more efficiently.

Diseconomies of Scale represent the opposite phenomenon instead. Where a company has grown too large, the cost per unit increases, thus making the firm no longer able to benefit from its achieved scale.

Diseconomies of scale can happen for a variety of reasons that might span from the inability of the organization to keep organizing its resource efficiently (due for instance, to a too large number of the workforce). When diseconomies of scale pick up, the firm will have higher marginal costs for each additional unit of output.

Thus a primary consequence for diseconomies of scale is a significant increase in coordination costs and a drastically reduced benefit in scaling.

Examples of diseconomies of scale

Why do companies experience diseconomies of scale? Economists argue that several reasons might cause that to happen:

It is essential to rethink the theory of Diseconomies of Scale as digital businesses manage to take advantage of new business models.

Are platform business models immune from diseconomies of scale?

As a platform business model the main asset is its network, which makes it possible for thousands of consumers and producers to connect, interact, transact, and exchange, those platforms can scale quickly and efficiently.

However, there is a catch.

Reverse network effects, congestion and when platforms scale too quickly

While many attributes to platforms business models the ability to scale at an indefinite level, in reality, also platforms enjoy negative consequences of scale, which are called reverse or negative network effects.

Take the case, of a platform that scales so quickly with user-generated content, that as it scales the risk of generating bad content at scale grows exponentially. There is a threshold where this becomes a real problem and the platform itself might actually collapse!