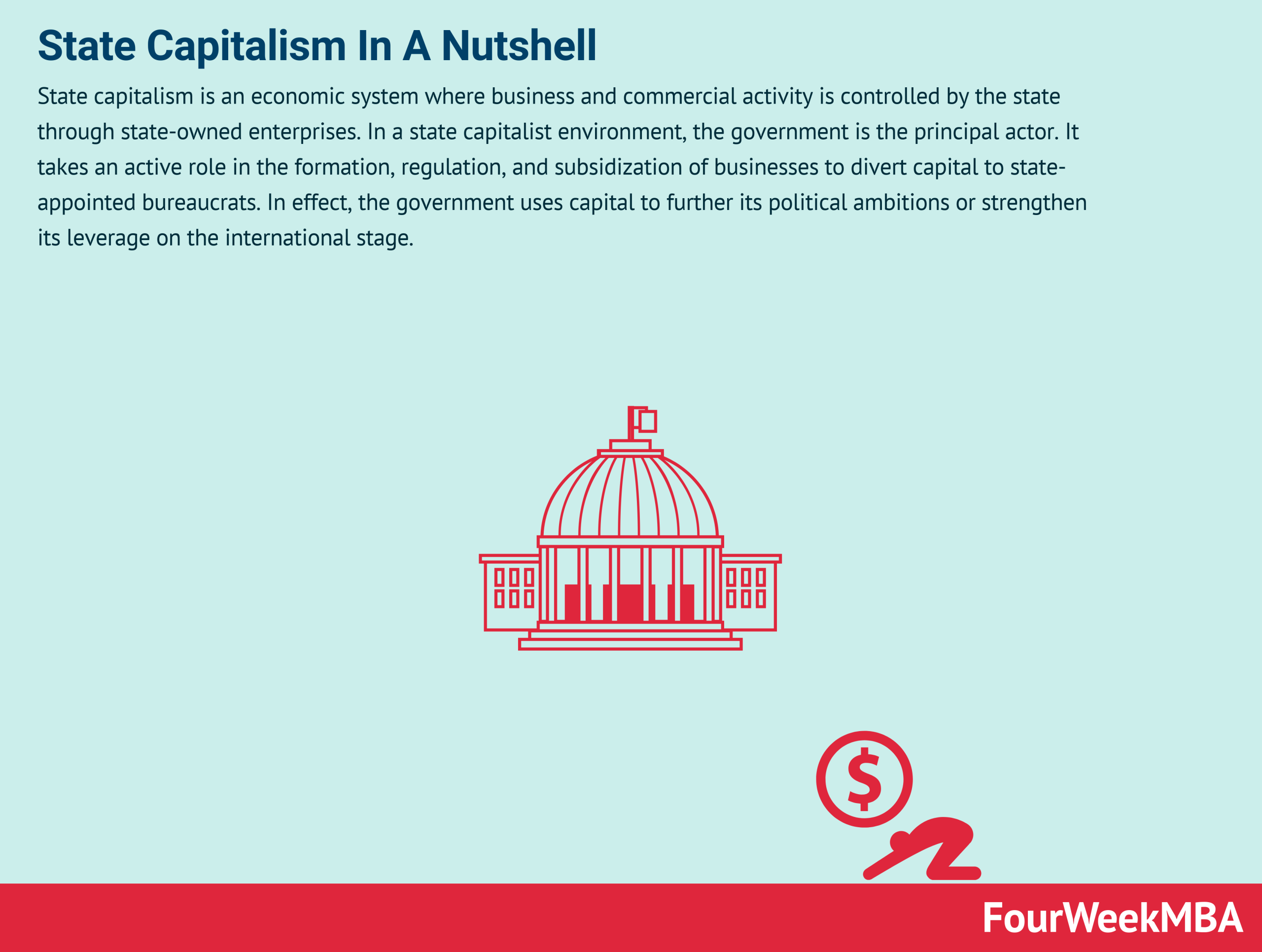 State capitalism is an economic system where business and commercial activity is controlled by the state through state-owned enterprises. In a state capitalist environment, the government is the principal actor. It takes an active role in the formation, regulation, and subsidization of businesses to divert capital to state-appointed bureaucrats. In effect, the government uses capital to further its political ambitions or strengthen its leverage on the international stage.

In a capitalist country operating under a free market economy, the government provides and upholds a legal framework under which businesses operate. In general, there is little to no governmental intervention in business matters. Multinational corporations are the principal actors.

In a state capitalist environment, the government is the principal actor, and it takes an active role. In his book entitled State Capitalism, author Joshua Kurlantzick argues that state capitalism in its modern form is “more protectionist, more dangerous to global security and prosperity, and more threatening to political freedom” than free-market economics.

Kurlantzick asserts that the two biggest state-capitalist countries in China and Russia are using their powers globally to:

Other examples of state capitalism

China and Russia are the most high-profile examples of state capitalism, but several other examples deserve mention.

To that end, Kurlantzick argues that state capitalism exists on a continuum of efficiency. The continuum is in turn determined by the degree of innovation, global trade, and modern management techniques, among other things. Efficient countries include Norway and Singapore, while Brazil is less efficient.

State capitalism in Norway is a result of post-World War II democratic reform and public ownership of vast oil reserves in the country.

The Norwegian government has significant stakes in many of the largest publicly listed companies, owning 37% of the Oslo stock market. It also has full ownership of the two largest private companies in Norway that operate in the petroleum and hydropower industries.

From a collection of small villages just a few decades ago, Singapore is now a world city home to many of the most powerful global corporations. It has achieved this remarkable feat through business-friendly legislation and close collaboration between the state and corporations.

The government is a majority shareholder in many major companies and, like Norway, favors investment in sovereign wealth funds.

Brazil has a long history of state capitalism. As early as 1930, the Brazilian government provided subsidies to support specific industries in the role of de-facto owner.

Private companies in the banking, utility, shipping, and railway industries were guaranteed survival – even if they went bankrupt.

In more recent times, the government has invested billions of dollars in Brazilian meat processing company JBS. This company has been actively involved in acquiring international food companies and, unsurprisingly, is one of the Brazilian government’s biggest donors.