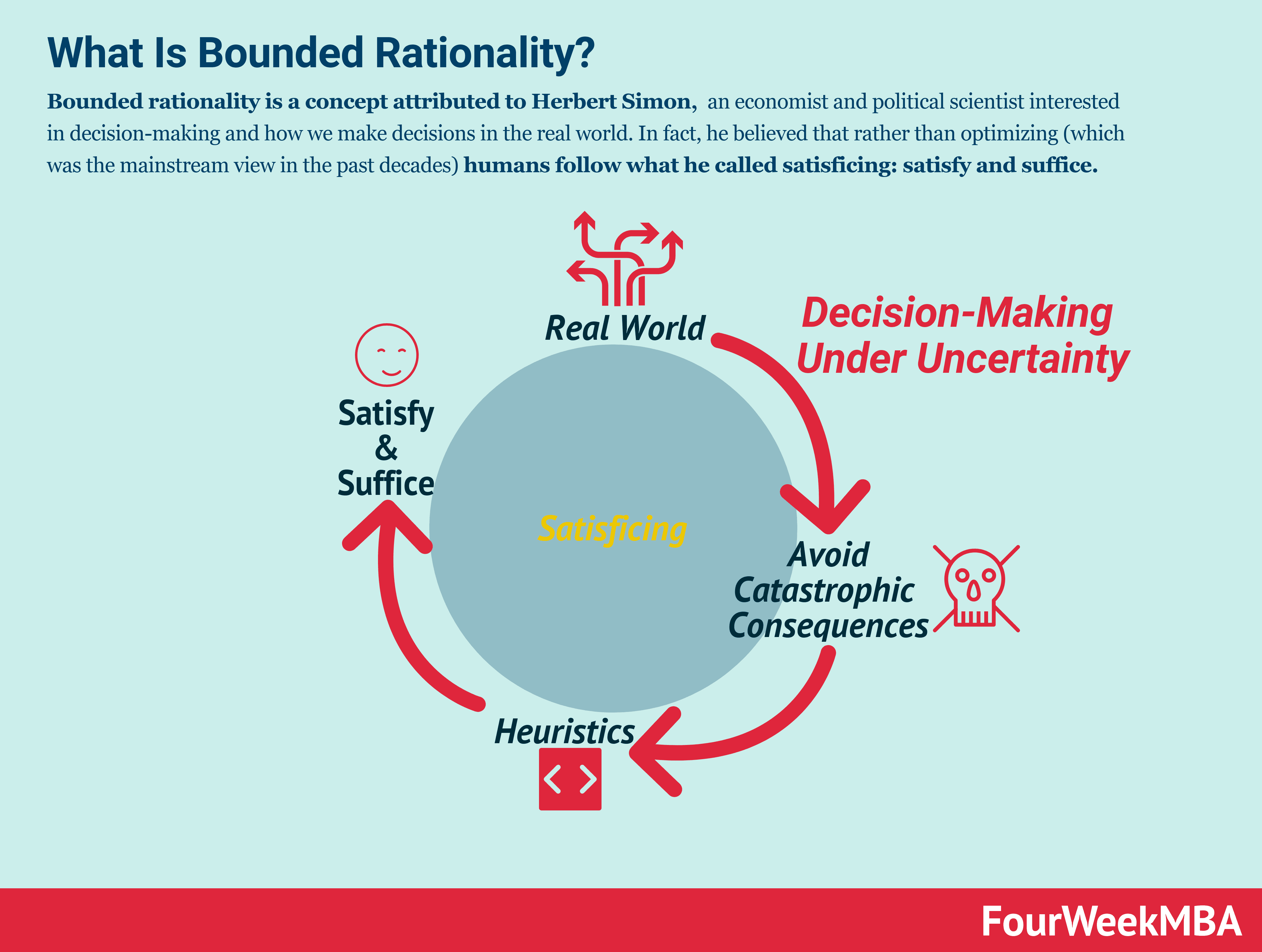 Bounded rationality is a concept attributed to Herbert Simon, an economist and political scientist interested in decision-making and how we make decisions in the real world. In fact, he believed that rather than optimizing (which was the mainstream view in the past decades) humans follow what he called satisficing.

A quick intro to bounded rationality

Many models, especially in economic theory and social sciences still rely on unbounded rationality to make predictions about human behavior. Those models have proved wholly ineffective, and they do not reflect the real world.

In the last decade cognitive theories that look at humans as a bunch of flawed beings that due to their biological limitations commit a series of errors (the so-called biases) has taken over. I supported this theory on this blog. However, what might seem biased, at a more in-depth look are in reality unconscious rationality (what we call gut feelings) that helps us survive in the real (uncertain) world.

Bounded rationality – more than a theory is a warning to economists and social scientists – that can be summarised as the study of how people make decisions in an uncertain world. As pointed out by Greg Gigerenzer, there are at least three meanings attributed to unbounded rationality:

The first two don’t admit the existence of an uncertain world. Why? When you study decision-making under risk, the assumption is that we live in a certain world, where given all the data available we can compute that risk. What economists like to call optimization under constraints. This is true only in a small world, where everything can be calculated.

The second assumes that due to our limited cognitive abilities we deviate from solving problems accurately, thus we fall into biases and cognitive errors. While the first emphasizes on rationality, the second focuses on irrationality.

There are a few things to take into account when thinking about bounded rationality:

We don’t live in a small world

In a small world, given enough data, we can compute the consequence of many actions and behaviors.

In the real world, risk cannot be known either modeled

In many disciplines, especially economics and finance at the academic level, the assessment of risk is central. However, what we cal risk implies something that can be computed. In fact, in the financial toolbox, there are many measures of risks.

However, those are often worthless, since they start from the assumption that given enough data you can put a precise number on the risk you’re undertaking.

However, that is not the case. In the real world, there are hidden variables that can be never taken into account even if you have zillions of data

Optimization is not bounded rationality

Many confuse optimization for bounded rationality. They are opposite concepts. Optimization starts from the assumption that we live in a small world where you can compute risk.

Bounded rationality starts from the assumption that we live in an uncertain world where we can’t assess risk. That is why we have a toolset of heuristics that work more accurately than complicated models in the real world

In short, heuristics rather than being shortcuts that are fast but inaccurate. Those are instead quick, effective and in most cases more accurate than other forms of decision making (in the real world)

Satisficing: Look at the one good reason

Survival is rationality in the real world

Put in this form rationality is not a matter of beautiful mathematical models, but it is about survival. What survives might be then called rational

Books to read to enhance your bounded rationality

With technological advancements, there is more and more available information at a cheaper cost (actually information nowadays is free). Also, technology also gives us the impression that we live in a world that we can control.

All it takes is enough information and we’ll be able to be successful in business. That is why you need to have the latest news, the newest gadget, and follow the latest trend.

This kind of approach can live you astray! As you get access to more and more information, this also improves the noise exponentially.

Thus, rather than getting better at making decisions you become way worst. With an even worse consequence: you’re not aware of that. The fact that you have a lot of data makes you believe that you know best.

Therefore, I believe there are three aspects to take into account in the modern, seemingly fast-changing world:

In this respect, three books can help you with that. Two books are from Gerd Gigerenzer, a German psychologist who has studied bounded rationality and heuristics in decision making. The third is from Nicholas Nassim Taleb, author of The Black Swan and the Incerto Book Series.

In the past century, the leap forward for humanity was to teach to most of us how to read and write. If that was enough in a modern world where information was still scarce.

Nowadays with the advent of social media and the increasing speed of the internet, there is another tool that anyone has to master to survive: statistical thinking.

Risk Savvy helps you build the toolbox to become a better statistical thinker. Or to ask better questions that allow you to navigate through the noise of the modern world:

Gut Feelings: The Intelligence of the Unconscious

This book is an excellent introduction to the concept of bounded rationality and heuristics. It is also a fresh perspective on decision-making. Where current prevailing cognitive psychological theories focus on our biases and cognitive errors, this book focuses on why instead those heuristics make a lot of sense.

In fact, gut feelings are seen quite skeptically in the world of academia and corporations where big words are looked with more respect. This book shows you why gut feeling matters in business as in life:

Skin in the Game: Hidden Asymmetries in Daily Life

Skin in the Game is the bible for understanding how to get along in a world that is plenty of hidden asymmetries:

What Is OKR? The Goal-Setting System To Scale Up Your Business

Andy Grove, helped Intel become among the most valuable companies by 1997. In his years at Intel, he conceived a...