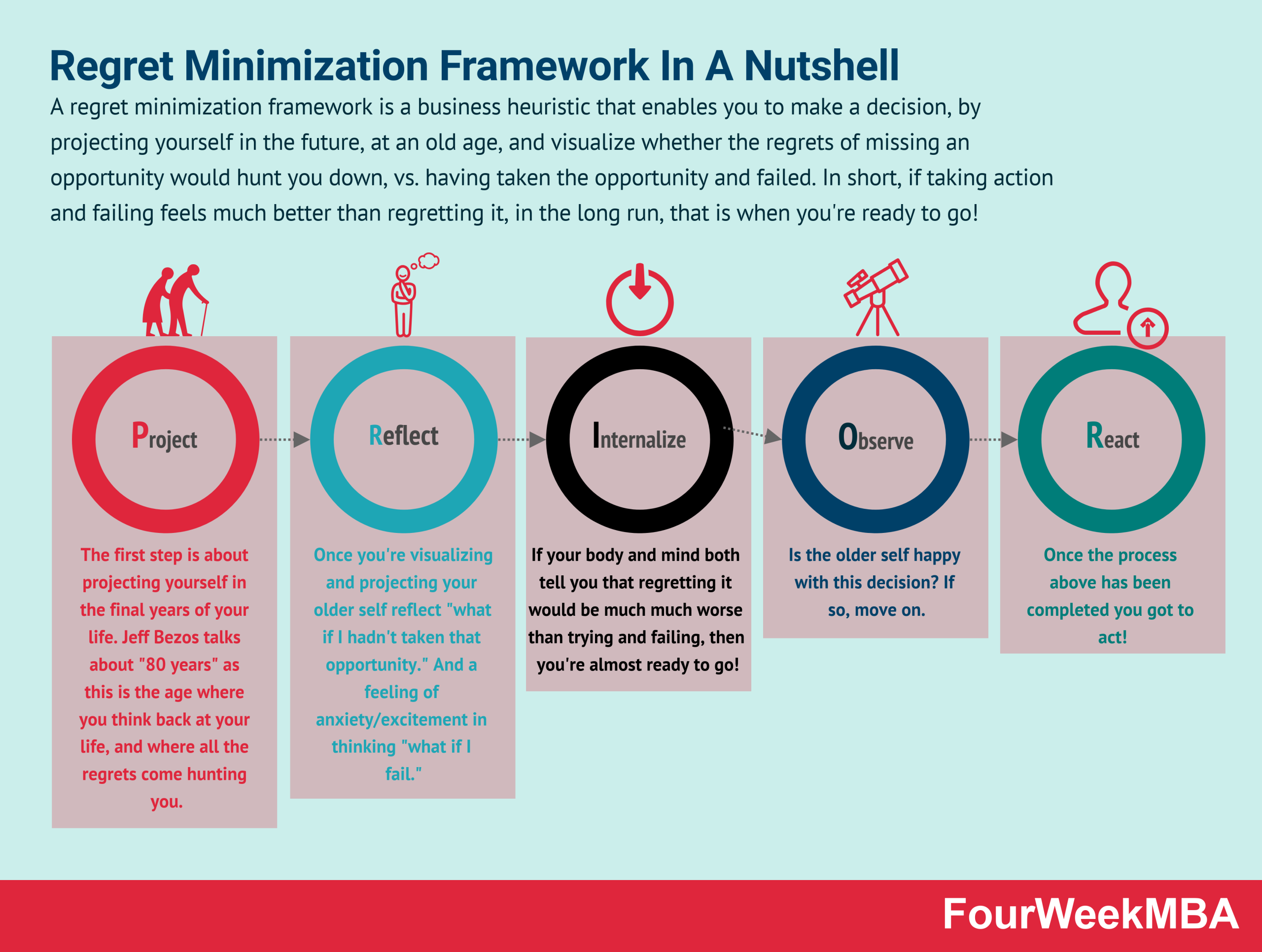 A regret minimization framework is a business heuristic that enables you to make a decision, by projecting yourself in the future, at an old age, and visualize whether the regrets of missing an opportunity would hunt you down, vs. having taken the opportunity and failed. In short, if taking action and failing feels much better than regretting it, in the long run, that is when you’re ready to go!

The regret minimization framework has been made popular by Jeff Bezos. Indeed, in many interviews over the years he has highlighted over and over again, how this framework helped him make a decision (that of leaving Wall Street) which, with hindsight was an incredibly successful one.

Thus, when the journalist highlighted, that was not a “Carpe Diem” moment (a moment driven by instinct, rather than reason) Jeff Bezos stressed out:

I don’t go in for Carpe Diem, I go in for regret minimization framework!

As Jeff Bezos further explained in another interview, as he recounted the whole story:

I went to my boss and said to him you know I’m going to go do this crazy thing and I’m going to start this this company selling books online and this is something that I’d already been talking to him about in a sort of more general context.

But then he said “let’s go on a walk” and we went on a two-hour walk in Central Park in New York City. And the conclusion of that was this he said “you know this actually sounds like a really good idea to me but it sounds like it would be a better idea for somebody who didn’t already have a good job.”

Thus, Jeff Bezos’ boss tried to persuade him. Yet, as Bezos recounted:

And he convinced me to think about it for 48 hours before making a final decision. And so I went away and and and was trying to find the right framework in which to make that kind of big decision. And you know I already talked to my wife about this and she was very supportive. And said “look you know you can count me in 100% whatever you want to do.”

However, as Bezos pointed out this was not the “implicit deal” they had as they got together:

True she had married this kind of you know, fairly stable guy in a stable career path. And now he wanted to go do this crazy thing but she was 100% supportive. So it really was a decision that I had to make for myself.

In that process the idea came:

And the framework I found which made the decision incredibly easy was what I called – which only a nerd would call – a regret minimization framework. So I wanted to project myself forward to age 80 and say okay now I’m looking back on my life I want to have minimized the number of regrets I have.

How did he know?

I knew that if I failed I wouldn’t regret that. But I knew the one thing I might regret is not ever having tried and I knew that that would hunted me every day. And so when I thought about it that way, it was an incredibly easy decision. And I think that’s a very good. It’s if you can project yourself out to age 80 and think what will I think.

At that time it gets you away from some of the daily pieces of confusion. I left this Wall Street firm in the middle of the year when you do that you walk away from your annual bonus. And that’s the kind of thing then the short-term can confuse you, but if you think about the long-term then you can really make good life decisions that you won’t regret later.

This short vs. long-term decision-making model would actually become the basis for the whole of Amazon’s philosophy. In fact, as the company listed back in 1997, within its shareholders’ letter, in a paragraph entitled “It’s All About the Long Term” Jeff Bezos explained:

We believe that a fundamental measure of our success will be the shareholder value we create over the long
term. This value will be a direct result of our ability to extend and solidify our current market leadership position. The stronger our market leadership, the more powerful our economic model. Market leadership can translate directly to higher revenue, higher profitability, greater capital velocity, and correspondingly stronger returns on invested capital.

Our decisions have consistently reflected this focus. We first measure ourselves in terms of the metrics most
indicative of our market leadership: customer and revenue growth, the degree to which our customers continue to purchase from us on a repeat basis, and the strength of our brand. We have invested and will continue to invest aggressively to expand and leverage our customer base, brand, and infrastructure as we move to establish an enduring franchise.

We’ve always said that when confronted with the choice between optimizing for short-term profits versus what’s best for customers over the long term, we will choose the latter—and you can see that during every phase of this pandemic.

Let’s break down the regret minimization framework so that you can use it too!

Breaking down the Regret Minimization Framework

Let’s now break down the main thinking phases, through which a decision can be made within the regret minimization framework. We can do that through five steps, which we summarized as “PRIOR” from the Latin “precede” as the framework that precedes the final decision.

The first step is about projecting yourself in the final years of your life. Jeff Bezos talks about “80 years” as this is the age where you think back at your life, and where all the regrets come hunting you.

Once you’re visualizing and projecting your older self. Start reflecting “what if I hadn’t taken that opportunity.” You will notice two feelings: that of regret for not having taken it, and a feeling of anxiety/excitement in thinking “what if I fail.”

At this stage, the “what if I fail” is the short-term consequence, balanced out with “how much would I regret.”

While Jeff Bezos recounts this framework as “rational” in reality, you got to feel what’s right at that moment. Thus, internalize.

If your body and mind both tell you that regretting it would be much much worse than trying and failing, then you’re almost ready to go!

Is the older self happy with this decision? If so, move on.

Once the process above has been completed you got to act!

All you have to know about Amazon: