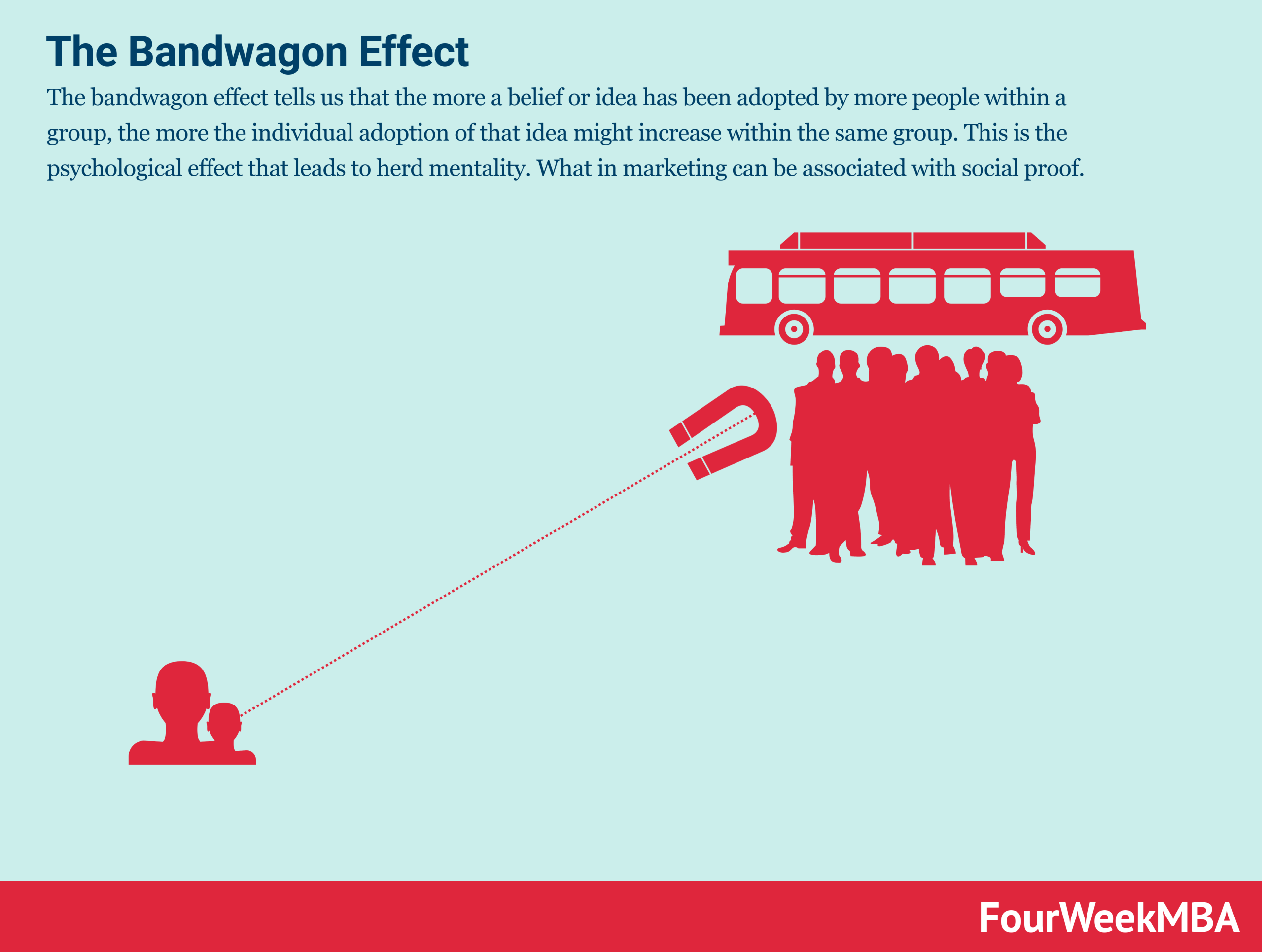 The bandwagon effect tells us that the more a belief or idea has been adopted by more people within a group, the more the individual adoption of that idea might increase within the same group. This is the psychological effect that leads to herd mentality. What in marketing can be associated with social proof.

Why does the bandwagon effect matter in business?

The bandwagon effect, often referred to as the herd mentality, is the propensity for someone to do something because a lot of other people are already doing it. The singular person often acts subconsciously. That is, they will act even if the values and opinions of the herd contradict their own.

The bandwagon effect is a powerful driver of human behavior and has therefore infiltrated most aspects of daily life.

In the business and marketing spheres, studies have shown that the effect influences not only a consumer’s willingness to buy but also how much they are willing to pay.

Furthermore, consumers are more likely to make a purchasing decision if they can see that others have made successful purchases before them.

Breaking down the bandwagon effect

The bandwagon effect is one aspect of consumer behavior that brands and businesses can exploit. The simplest way is for a business to show their product and service in action.

Traditionally, celebrities and other high-profile figures would feature prominently in advertisements. More recently, this technique has become the basis for influencer marketing.

Influencers with large, targeted followings are ideal for the bandwagon effect, for obvious reasons.

But businesses themselves can also jump on the proverbial bandwagon and adjust their product offerings accordingly. Often these trends are driven by popular consumer sentiment relating to technology or perceived status.

Many television manufacturers, for example, are now offering 4K resolution screens – even though most broadcasters do not support 4K resolution.

But since consumers are behind this demand for 4K products, it would be unprofitable for manufacturers to not use the bandwagon effect to their advantage.

Customer testimonials, reviews, and case studies are also crucial to any marketing campaign. A recent study by BrightLocal found that positive reviews make 91% of consumers more likely to buy from a business.

Furthermore, 84% equate positive reviews with recommendations from a friend and a further 53% will not purchase from a business with an average rating under 4 stars.

Amazon, Yelp, and TripAdvisor are all examples of the power of customer reviews in building large and successful businesses.

Drawbacks from the bandwagon effect

The greatest strengths of the bandwagon effect also have the potential to be its greatest weaknesses.

Consumers who act in the interests of the crowd are often not acting in their own interests.

This poor decision making may also extend to businesses themselves, who choose to invest in manufacturing goods or services based on trends and not on the core values of their organization.

Businesses may also find that as they (and their competitors) flock to popular markets, profit margins will be smaller.

Smaller businesses who do not possess long-standing customer reviews might also find that the bandwagon effect is detrimental to their marketing efforts.

In the absence of obvious social proof, businesses must direct consumers to other actions that increase the odds of buying so that this proof can be built organically over time.