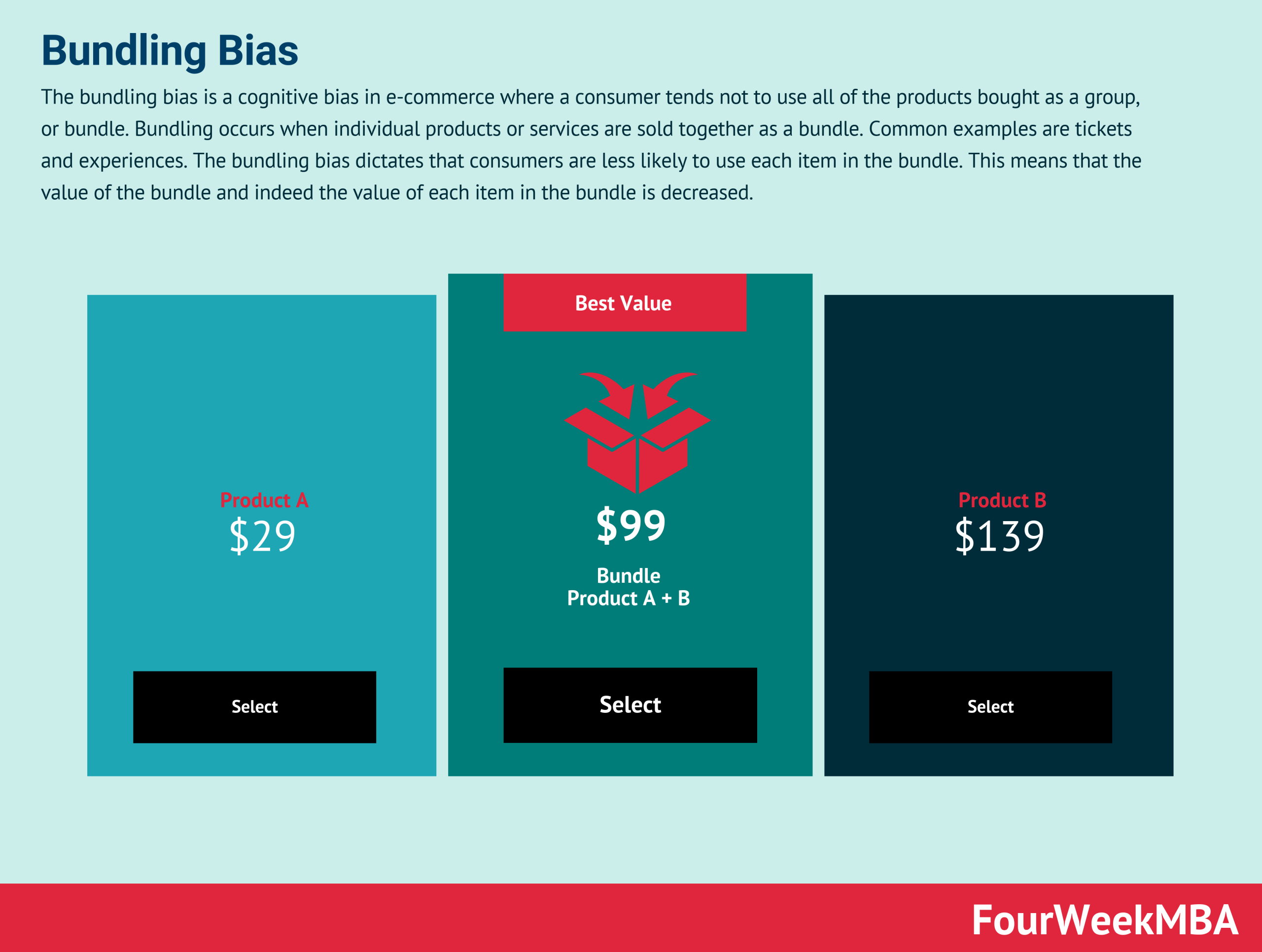 The bundling bias is a cognitive bias in e-commerce where a consumer tends not to use all of the products bought as a group, or bundle. Bundling occurs when individual products or services are sold together as a bundle. Common examples are tickets and experiences. The bundling bias dictates that consumers are less likely to use each item in the bundle. This means that the value of the bundle and indeed the value of each item in the bundle is decreased.

To explain this concept using an example, consider a cinema offering a bundle of five movie tickets for $51 – much cheaper than the $75 it would cost to buy each ticket separately. However, the bundled tickets are only valid for a month.

Let’s say that the consumer is a movie fanatic and manages to see three movies during those 30 days. With the remaining two tickets now invalid, the consumer has essentially paid $17 per ticket. If they had opted to buy three separate tickets, they would have paid $15 per ticket. Here, the bundling bias caused the consumer to spend more and in the process, receive less.

Exploiting the bundling bias in business and marketing

Businesses who sell bundled packages invariably increase sales and profit generation. If we return to the example of the movie fanatic, the cinema made an extra $2 on each movie the consumer attended. But it’s important to note that the cinema owner makes money on each ticket sold in the bundle – regardless of whether the consumer attends each of the five movies.

Of course, if the cinema also owns a candy bar, then it may lose out on sales if movies are less well attended. However, management can simply anticipate a lack of patronage by selling more tickets above and beyond cinema capacity.

Research has also shown that the nature of bundling is important for businesses. Physically bundling products together was found to be much more effective than the digital or monetary bundling of items

Bundling bias and the sunk-cost fallacy

The bundling bias has strong links to the sunk-cost fallacy, which is another cognitive bias describing consumer tendencies to follow through on something if money has been invested into it. If the movie-goer buys a single bundle of five tickets but sees three movies in a month, they are likely to determine that they have followed through on their investment.

This is because the bundle constitutes one “investment” – or purchase – and not five as in the case of buying each ticket separately. Bundling items also makes the cost of each ticket (and thus the cost of recouping the investment) less obvious to the consumer.