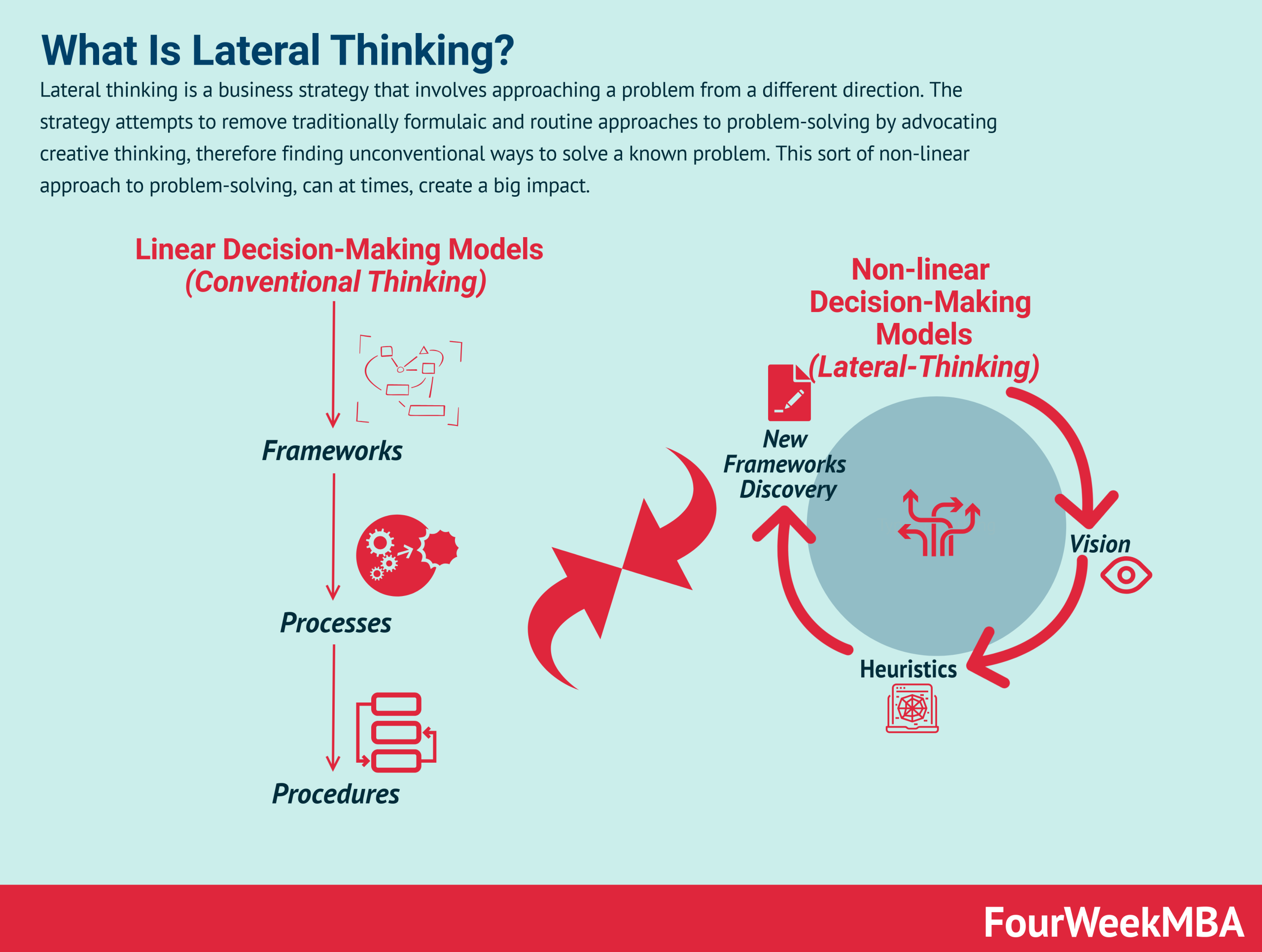 Lateral thinking is a business strategy that involves approaching a problem from a different direction. The strategy attempts to remove traditionally formulaic and routine approaches to problem-solving by advocating creative thinking, therefore finding unconventional ways to solve a known problem. This sort of non-linear approach to problem-solving, can at times, create a big impact.

Lateral thinking was coined by Maltese psychologist Edward De Bono, who argued that the concept was useful in forcing business executives to think outside the box. Traditional methods of introducing new products to the market involve analyzing market needs and then creating products suited to specific audiences.

In mature markets however, this approach leads to a proliferation of niche offerings that in turn increases market fragmentation. Inevitably, the individual segments become so niche that businesses cannot turn profits in them.

Lateral thinking is an alternative approach to this way of thinking. While there is an obvious need for creative thinking in gaining a competitive advantage, creativity itself is difficult to define. Indeed, many individuals have trouble summoning creativity at will and others may simply view themselves as uncreative individuals.

So what is the answer? Provocation.

Provocation causes mental instability in an individual and as a result, it forces them to develop new ideas. Importantly, the provocation must be outside of the experience or comfort zone of the individual or business concerned.

The four categories of provocation in lateral thinking

Consumers in modern society are quick to take offense, so businesses often find themselves appeasing the masses. But to stand out, provocative lateral thinking is the best way to verify whether creative ideas have potential.

Here are the four categories of provocation that such ideas may fall under:

However, the campaign had little effect on speeding among male drivers. The campaign was later revised, showing footage of young men speeding and being judged negatively by women in their age group. The message caught on and was highly successful, with over 60% of young male drivers admitting to reconsidering their driving habits.

When a marketing team brainstorms potential provocations, many of them will be unrealistic, politically incorrect, ineffective, or just plain ridiculous.

However, a combination of unreasonable provocations may subsequently result in a good idea coming to mind. Therefore, it is important to write down ideas – irrespective of potential viability – and move through the process regardless.