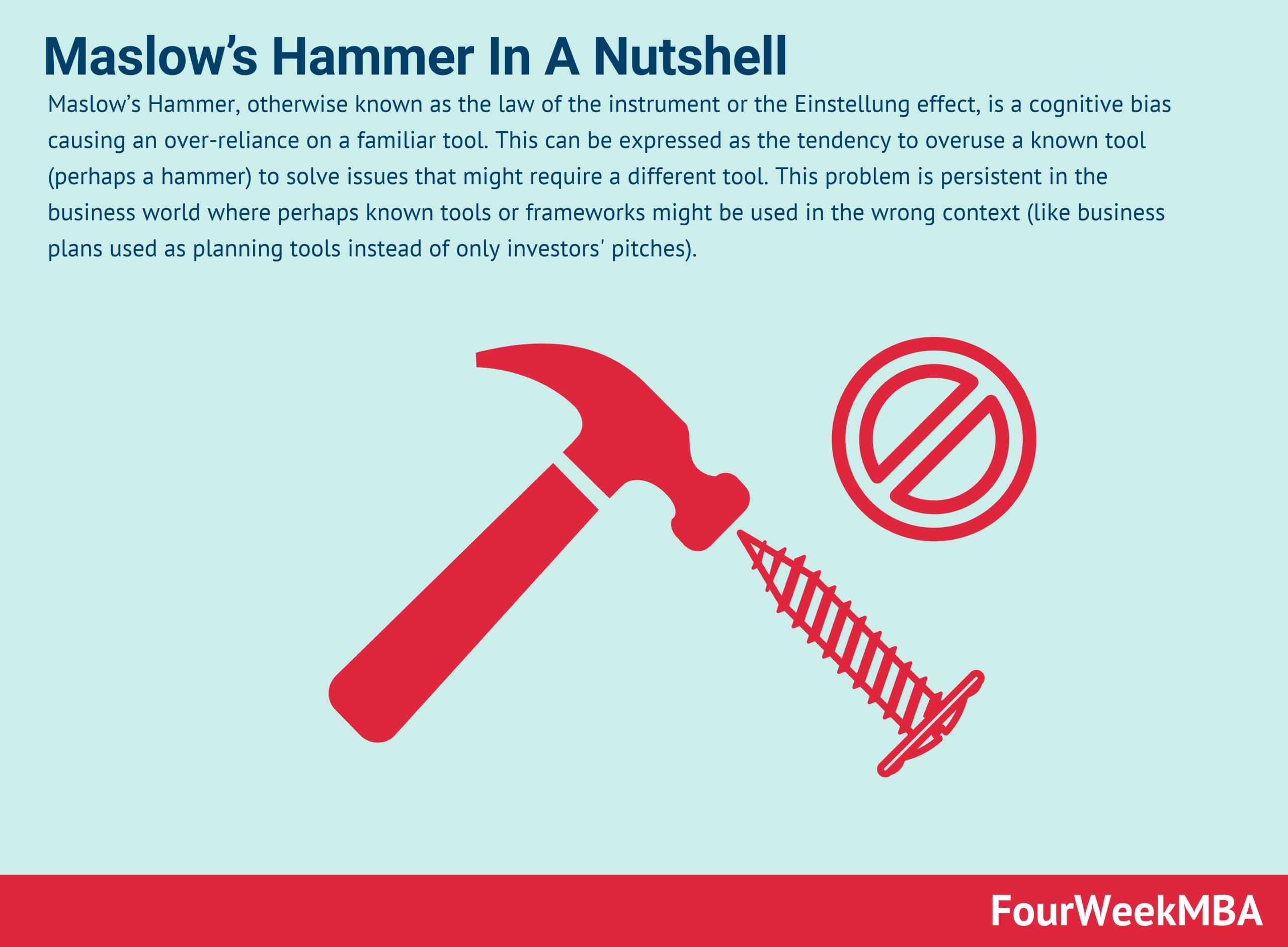 Maslow’s Hammer, otherwise known as the law of the instrument or the Einstellung effect, is a cognitive bias causing an over-reliance on a familiar tool. This can be expressed as the tendency to overuse a known tool (perhaps a hammer) to solve issues that might require a different tool. This problem is persistent in the business world where perhaps known tools or frameworks might be used in the wrong context (like business plans used as planning tools instead of only investors’ pitches).

Maslow’s Hammer was named after prominent psychologist Abraham Maslow, who said “I suppose it is tempting, if the only tool you have is a hammer, to treat everything as if it were a nail.”

In other words, a hammer is not the most appropriate tool in every situation. But this does not stop a person (armed only with a hammer) from trying to solve different problems with the same solution. What’s more, the person with a hammer may not consider other options and resist looking for a better alternative.

Maslow’s Hammer is a solution-based heuristic, otherwise known as a mental shortcut. Individuals tend to use familiar tools to get what they want without first determining if the tool is right for the job. This is also true of a newly acquired skill, where the individual tends to believe the skill can be applied almost anywhere.

In business, Maslow’s Hammer can manifest in leaders who persist with ineffective leadership styles that no longer work in the present environment. It is also occupation-specific. For example, surgeons believe surgery is the best choice. Psychiatrists believe medication is optimal, while psychologists believe in cognitive behavioral therapy above anything else.

Why does Maslow’s Hammer occur?

To explain the mechanisms behind Maslow’s Hammer, consider these two factors:

Avoiding Maslow’s Hammer means developing the ability to recognize cognitive biases in ourselves and other people.

Here are some simple ideas:

Maslow’s Hammer In The Business World

The tendency to overuse tools and frameworks in the business world is pretty common. There are several reasons for that. One example is how entrepreneurs might use a tool like the business plan in the wrong context or understand why they are using it. For instance, the business plan might be a great tool to pitch to investors. However, not necessarily to execute a business strategy.

Think, for instance, what would have happened if Amazon didn’t start to execute from books and instead would have tried to expand all over the places too quickly (like Webvan did). Thus, it’s critical to be tool and framework agnostic in the business world and understand that different tools have different purposes.