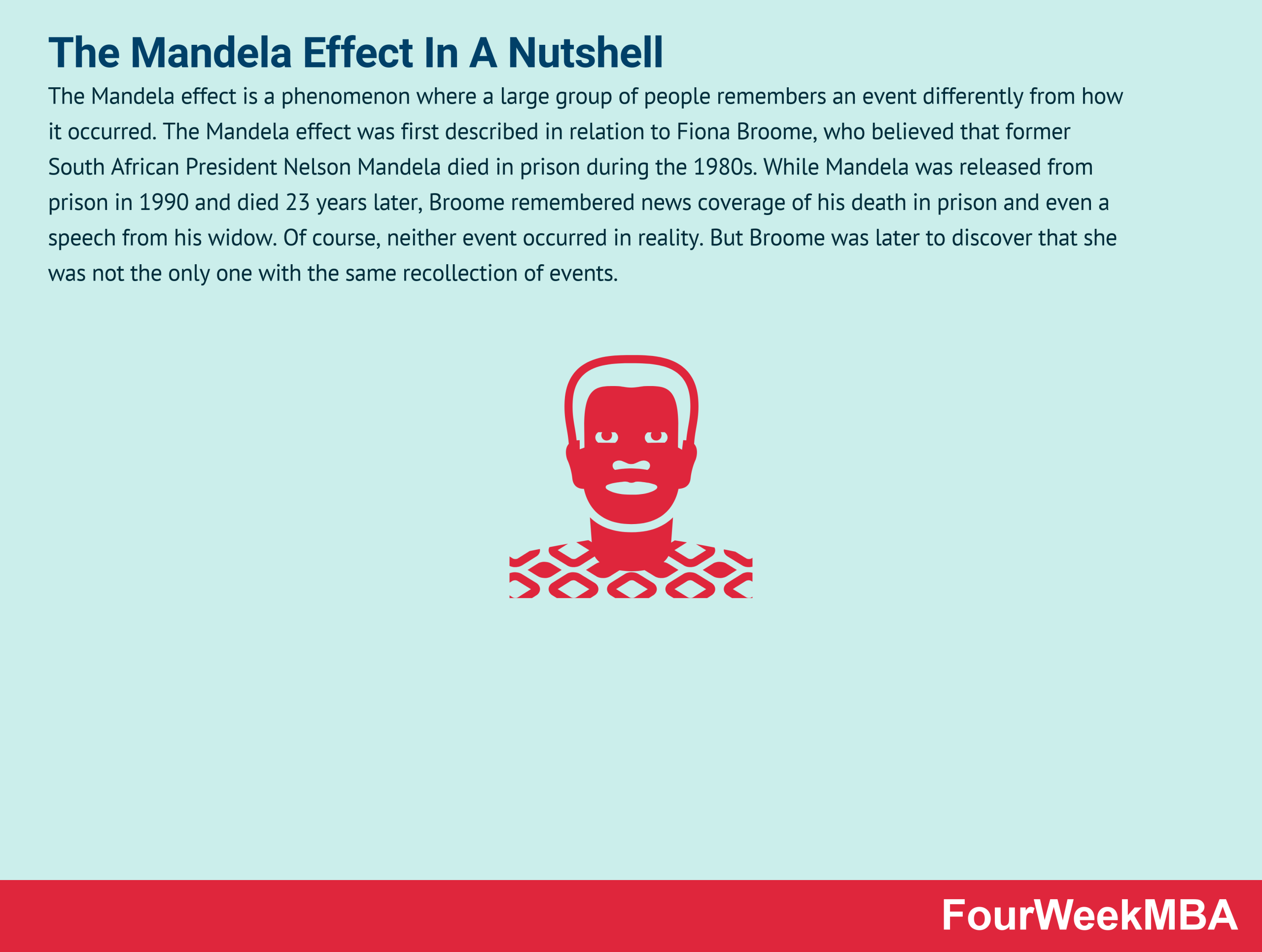 The Mandela effect is a phenomenon where a large group of people remembers an event differently from how it occurred. The Mandela effect was first described in relation to Fiona Broome, who believed that former South African President Nelson Mandela died in prison during the 1980s. While Mandela was released from prison in 1990 and died 23 years later, Broome remembered news coverage of his death in prison and even a speech from his widow. Of course, neither event occurred in reality. But Broome was later to discover that she was not the only one with the same recollection of events.

Causes of the Mandela effect

Opinion is divided on the exact cause of the Mandela effect, but some doctors believe it is a form of confabulation – or “honest lying”.

Here, a person creates a false memory to fill in gaps in their memory. They are not, as some believe, creating memories to lie or deceive.

Some researchers posit that individuals use confabulation to piece together what they believe is the most likely sequence of events. This is because the events described in many Mandela effect cases are quite close to what actually transpired.

A simpler explanation for the effect lies in a person’s inability to remember events accurately.

This may occur when facts become distorted because of the passage of time. Crime eyewitnesses are often unable to recall certain subtle details of a crime, which may lead to gap-filling.

The “memefication” of the internet is also a contributor. Users are free to alter sayings, logos, or images and then harness the ability of the internet to spread misinformation rapidly.

Examples of the Mandela effect

Many art admirers insist that the subject of Leonardo da Vinci’s painting is frowning, even though she is clearly smirking.

Researchers believe that the tendency for artworks of that period to feature frowning subjects has led people to form inaccurate memories.

The mascot of the popular board game Monopoly is often thought to be wearing a monocle.

Upon closer inspection, however, the mascot is not wearing a monocle. It is thought that people confuse the Monopoly mascot with the Planters peanut company mascot, Mr. Peanut.

In the oft-quoted movie Forrest Gump, many assume that Tom Hanks utters the line “Life is like a box of chocolates.”

However, the actual line is “Life was like a box of chocolates.” Emphasis added.

During the 1989 Tiananmen Square protests, it is sometimes assumed that the unidentified man who stands in front of a tank was run over and killed.

This is despite video evidence to the contrary showing the man being detained and led away from the scene after a brief confrontation.