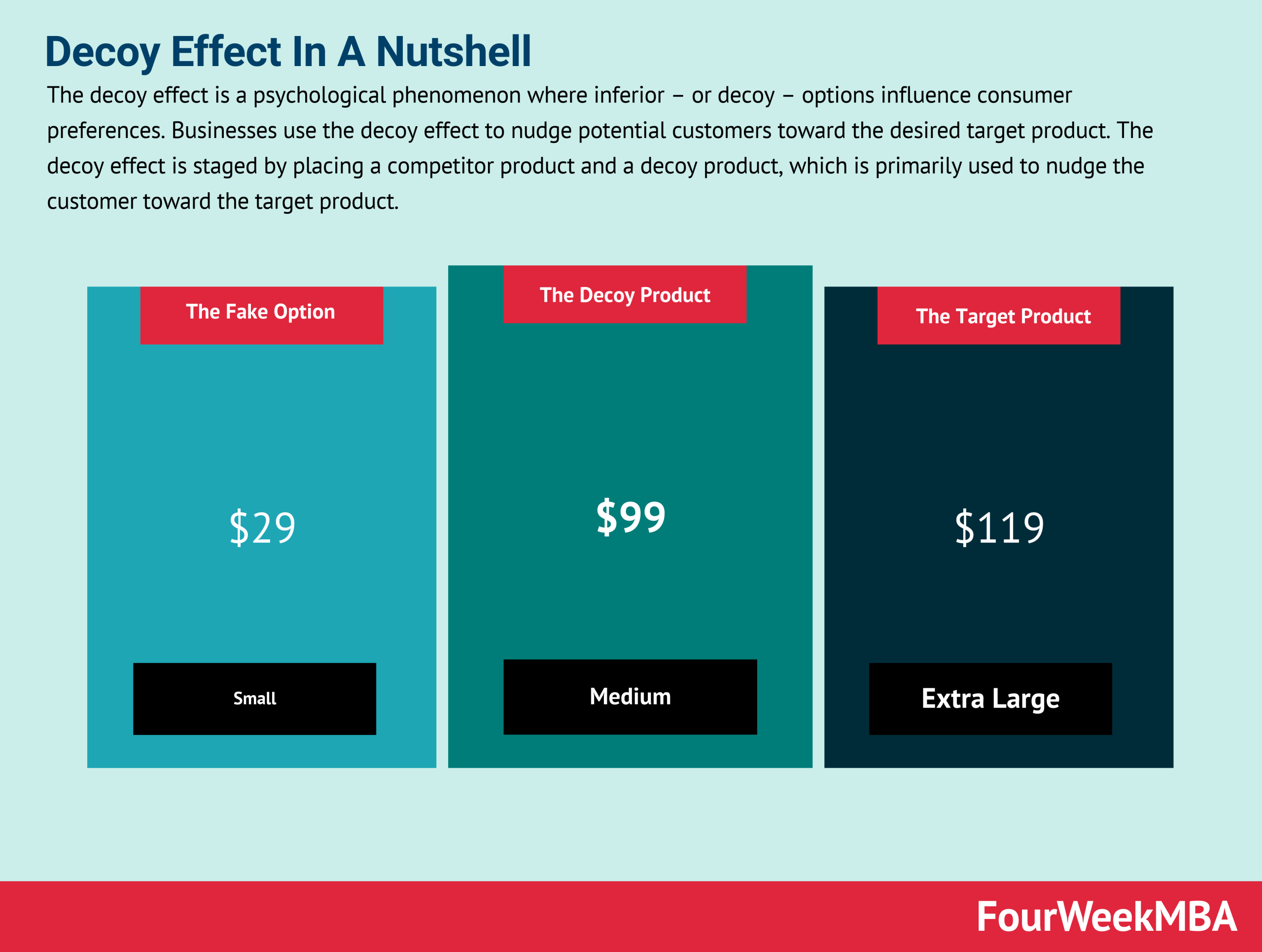 Price is one of the most sensitive elements of a marketing mix. Businesses understand this well and have devised pricing strategies that encourage the consumer to spend more.

The decoy effect is one such strategy. To study how consumer product preferences are influenced by the effect, National Geographic studied the popcorn purchasing habits of cinemagoers.

When faced with only two choices – a $3 small popcorn or a $7 large popcorn – most purchased the small popcorn noting that the large was too expensive.

The experiment was then repeated with the addition of a $6.50 medium popcorn, and the consumers were again asked to choose. This time, most chose the large $7 option. By adding the medium-sized alternative, greater value was given to the larger size which was previously deemed too expensive.

In the context of the decoy effect, the medium $6.50 popcorn was the decoy because it was inferior to the larger option in value for money. Decoys are deliberately inserted into product ranges to exploit consumer tendencies toward prioritizing value for money.

In dollar terms, the cinema was able to increase revenue by directing consumers from the small $3 option to the most expensive $7 option. The consumer, however, is more likely to spend money on a product or service they didn’t want or need.

Components of the decoy effect

The decoy effect is based on the concept of asymmetric domination, most evident when a consumer has three products or services to choose from. To explain this concept in more detail, let’s give each product a name:

In other words, the medium popcorn:

Applying the decoy effect in marketing

Marketers can use the decoy effect to their advantage and happily, research has found that consumer awareness of the effect does not diminish their tendency to choose the most expensive option.

Companies that offer tiered pricing or subscription plans are most likely to benefit from inserting decoys into their ranges.

Hosting companies can offer a feature-packed “Platinum” hosting plan that is only slightly more expensive than a lesser equipped “Gold” plan. Coffee shops can offer large coffees closer in price to medium coffees. In real estate, the value of a particular house can be highlighted by comparing it against two similarly priced houses with fewer features occupying less favorable neighborhoods.