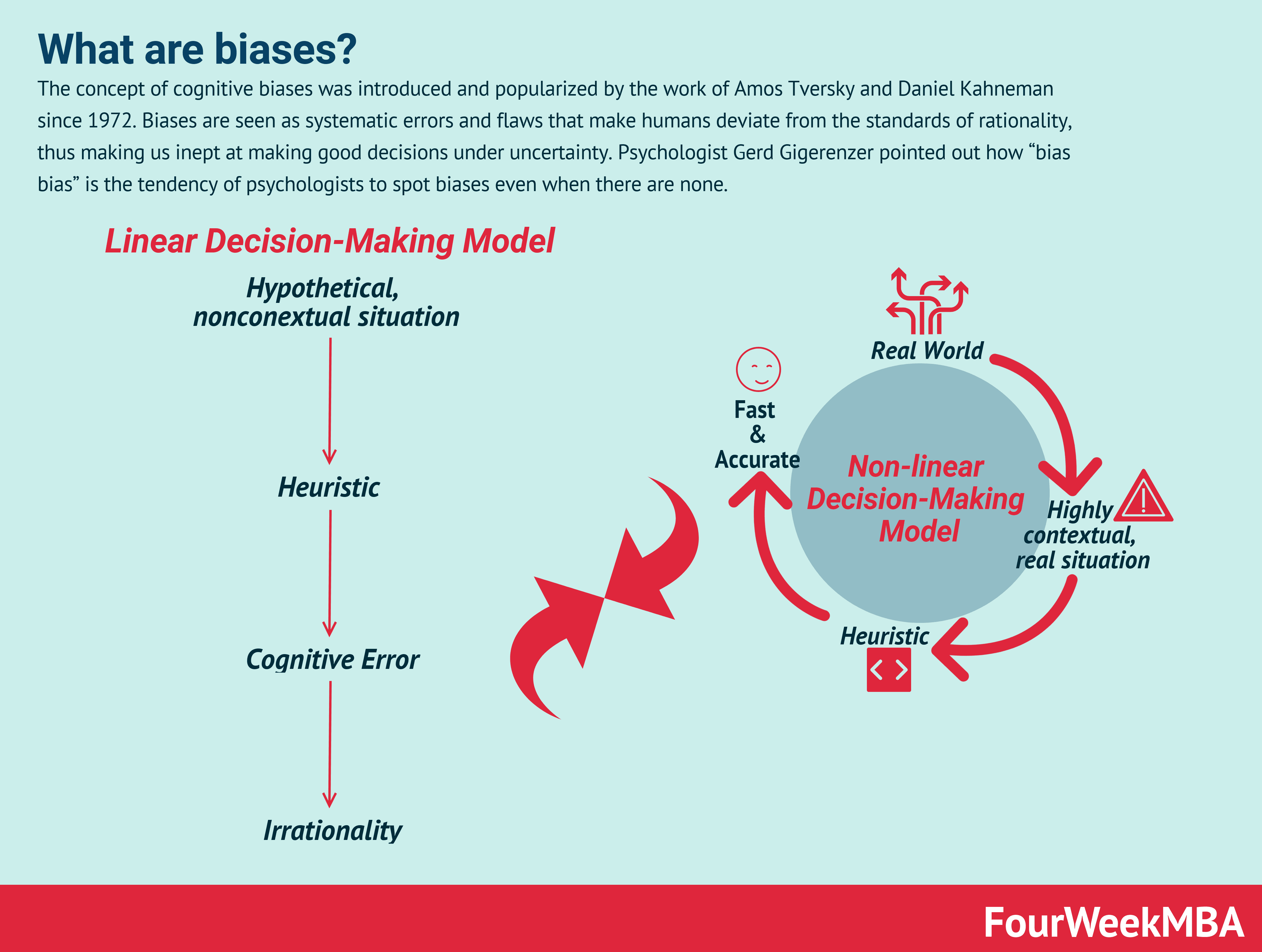 The concept of cognitive biases was introduced and popularized by the work of Amos Tversky and Daniel Kahneman since 1972. Biases are seen as systematic errors and flaws that make humans deviate from the standards of rationality, thus making us inept at making good decisions under uncertainty.

That is the conventional definition, let’s see what’s wrong about it and why we want to start from an alternative definition.

Why we got it all wrong about biases?

In my previous article about heuristics, we saw why heuristics can be powerful thinking tools for business people dealing with uncertainty on a daily basis.

When I define heuristics though I’m not using the conventional definition (to be sure that is not the definition given by Kahneman) and we’ll see why that same definition is biased in the first place.

That makes us reconsider the whole thinking model business people, entrepreneurs, managers and all the practitioners out there have been influenced by (count me in).

That is why I decided to analyze the few flaws of the conventional way to look at biases and cognitive errors.

Let’s recap here some of the key points of what heuristics are really about and why those make sense for business people.

Then we’ll go through the core mistakes of the conventional view of biases and cognitive errors at the foundation of behavioral economics and much more.

Then we’ll ask the fundamental question: what’s next?

When dealing with real-life scenarios we can relate to them based on the context we live. A Halloween custom wore during a casual Friday won’t look as odd as the same custom wore on a regular day.

Humans think in narrow contexts not because they are narrow-minded but primarily due to the fact that often a successful decision is based on surviving a specific situation.

At the same time, our minds are capable of understanding at a deep level (not logical, neither explainable) the subtleties of the real world, made of hidden costs, risks, and high uncertainty.

In this scenario, things that might seem irrational are not such if looked from a different perspective.

A classic example that gets cited often is about how humans are “loss averse” thus giving much more weight to a loss of $10 say compared to the same $10 gain.

For the modern psychologist, marketer or businessman that might seem irrational and a signal of the human mind’s limitations and stupidity.

However, in real-world scenarios, things are never so clean and clear. Often the problem is hidden, so hidden that being loss averse is just a natural, time-tested defense mechanism against possible screw-ups.

The whole Warren Buffett’s playbook can be summarized: “Rule No. 1: Never lose money. Rule No. 2: Don’t forget rule No. 1”.

The most amateur stock trader knows that losing money is way worse than gaining. If you start from a $100 investment and you lose 50% you end up with $50.

Polymath Jared Diamond, in his book, The World Until Yesterday, talks about constructive paranoia.

He learned this concept when leaving with several tribes in New Guinea. For instance, those tribes had a cultural norm to avoid sleeping under big trees due to a seemingly irrational fear those might fall.

Indeed, there is a very low probability of that happening. However, if it does there is no way back, you’re dead.

In most real-life scenarios those potential losses carry hidden risks, which as they can’t be computed, are ignored by psychologists, but instead are not hidden to the human mind.

So better be paranoid than a dead smart person. Tribesmen know better while some modern psychologists have forgotten.

What if risk aversion is just a constructive paranoia? This is one of the many examples of how biases could be easily reframed.

A narrow definition of rationality

Modern psychologists have primarily looked at one side of rationality and assumed that’s all that is. This led to the mainstream acceptance of a distorted theory of mind, which focuses on the cognitive errors humans make devoid of any context which has led to an endless list of biases which, we stupid humans fall into.

While it is admirable to move from a psychological framework where humans are infallible to understanding and studying the flaws of our minds.

It is as bad to fall for the opposite thinking model, where the human mind is seen as just an artifact of an ancient time, which only carries errors because it can’t deal anymore with the modern world.

That is why in the last years one of the most used mantras in business, marketing, sales or any endeavor that deals with human behavior has been about “biases and cognitive fallacies” yet as we’ll see those fallacies are mostly rationality in the real world, applied contextually.

Scholars like Kahneman and Tversky have changed the way we think about how we think.

In the book “Thinking, Fast and Slow” Kahneman explains his whole career spent in understanding how humans deal with decision-making, especially in relation to uncertainty and whether humans are good “intuitive statisticians.”

As Kahneman’s work would show, people are not good intuitive statisticians, and a two-model thinking system drove our decision-making in the real world.

From these assumptions heuristics produced biases, and those biases, in turn, were systematic errors that made us irrational.

Later on, Kahneman would draw a more balanced view for which judgment and choices aren’t just based on heuristics but also on skills.

Thus, biases would also be the result of the expert overconfidence, or the fact that the more skills you acquire in certain fields the more you become confident about them, thus fall into cognitive biases.

Kahneman’s work has led to infinite lists of human irrationality, humans’ complete inadequacy in having a clear picture of the real world and our inability to deal with logic.

From psychology, straight into economics, decision-making and any other endeavor related to human behavior (marketing, sales, entrepreneurship and more) these have become the dominant thinking models.

Yet this view is extremely narrow and it leads to the opposite excess. Psychologists and practitioners become producers of an infinite list of biases that grow every day to show how irrational we are.

While this production has some literary value, it doesn’t carry any value for the business person trying to make things work in the real world. If at all, that view can be limiting and damaging.

Some of the fundamental errors are the following:

If you agree with all the points above, does it still make sense to keep using this thinking model?

What’s next? Beyond the “bias bias” and into the real-world decision making

Gerd Gigerenzer, in “The Bias Bias in Behavioral Economics” explains how Kahneman’s work has led to the tendency to “spot biases even when there are none.”

As Gigerenzer explained people ” have largely fine-tuned intuitions about chance, frequency, and framing.”

Thus showing little evidence about the fact that biases lead to any cost at all. Therefore, each time you see a bias proposed by psychologists you might want to keep a skeptical eye and trust your fine-tuned intuition, and acquired experience as a business person!

Asymmetric Business Models In A Nutshell

In an asymmetric business model, the organization doesn't monetize the user directly, but it leverages the data users provide coupled...