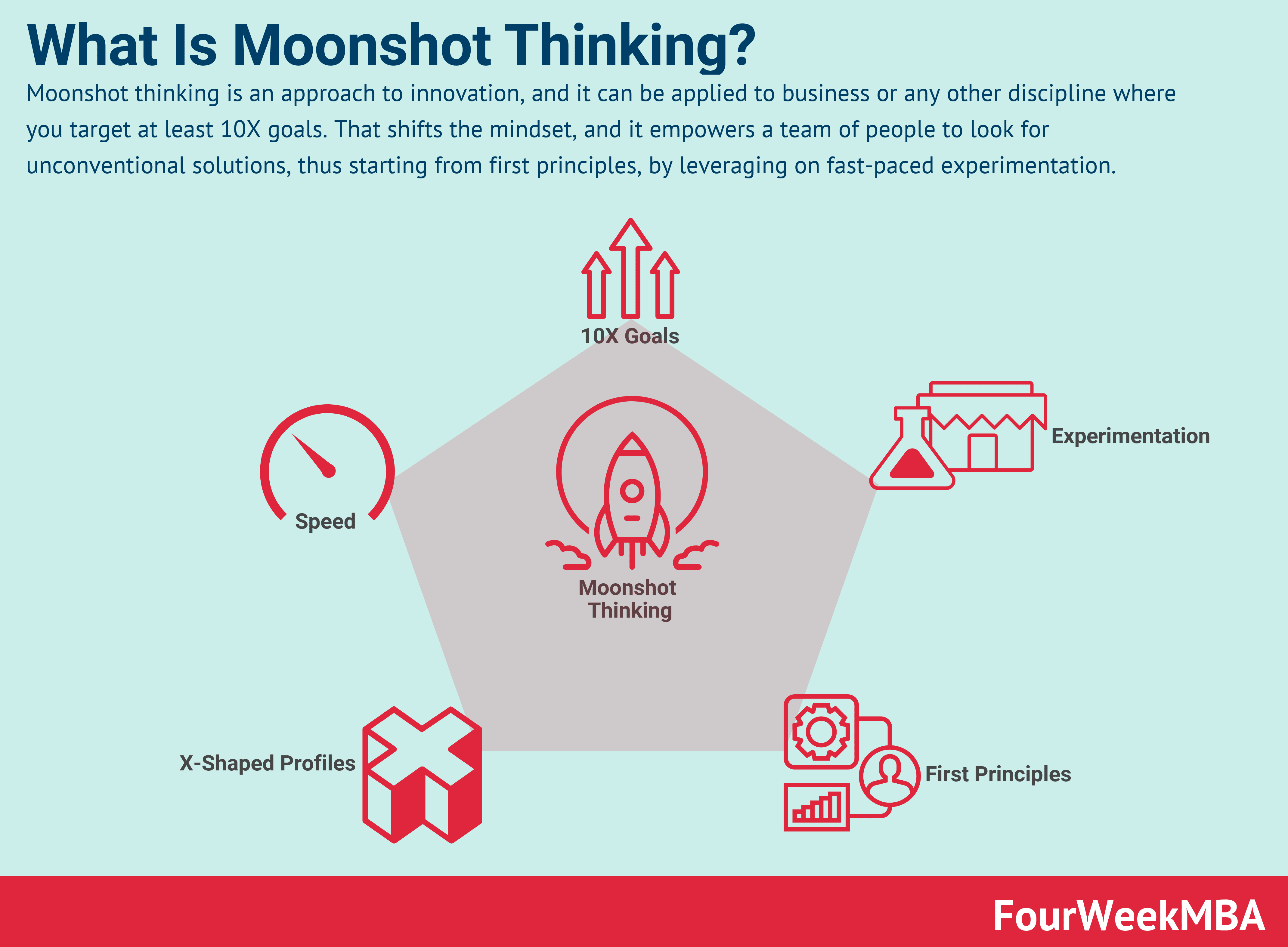 Moonshot thinking is an approach to innovation, and it can be applied to business or any other discipline where you target at least 10X goals. That shifts the mindset, and it empowers a team of people to look for unconventional solutions, thus starting from first principles, by leveraging on fast-paced experimentation.

It all started from the search engine that conquered the web, Google. Back in the late 1990s, Google was one of the last movers on the search industry, yet it was 10X better than its competitors. Also, its founders’ Page and Brin had the 10X, moonshot mindset of thinking big. When they set the mission for the company, they didn’t say “we’ll build a competitive search engine.”

They said, “Our mission is to organize the world’s information and make it universally accessible and useful.”

This mission might have sounded ridiculous for two young Ph.D. that were more academics than people from the business world. Yet those academics managed to build a business that is worth more than a trillion:

However, Page and Brin created an innovative arm of the company, called Google X, whose aim was to solve significant challenges independently from the core business model of the company.

As pointed out by Larry Page, on the 2013 founders’ letter to shareholders:

It’s amazing what you can achieve with a small dedicated team when you start from first principles and aren’t encumbered by the established way of doing things.  Yet I’ve learned over time that it’s surprisingly difficult to get teams to be super ambitious because most people haven’t been educated in this kind of moonshot thinking.  They tend to assume that things are impossible, or get frightened of failure.  It’s why we’ve put so much energy into hiring independent thinkers at Google, and setting big goals.  Because if you hire the right people and have bold enough dreams, you’ll usually get there.  And even if you fail, you’ll probably learn something important.

We can learn a lot from Google X moonshot thinking and apply it back to the growth of your business.

What is moonshot thinking? It’s all about 10X!

As pointed out by Astro Teller, who runs Google X:

The context matters so much the expectations matter so much the people matter the resources matter but that’s not the biggest issue there have been these times in the world and sadly they’ve been mostly military in nature where you get a huge number of really smart people together you know not 5 or 10 but a hundred or more and you give them the resources but much more importantly the expectation that they will produce miracles.

This is moonshot in action, and it starts by creating a feeling of exigency.

One of the things for which humans are wired is survival. The issue is that most cultures and corporate cultures create a feeling of normality, which makes us feel safe. That feeling kills the moonshot thinking. Moonshot thinking starts from a life philosophy of treating each day like it is the last and most important for survival. This is not different from Jeff Bezos’ Day One.

Context is king for the moonshot thinking

Making the context that’s the hard part perspective shift is what it’s all about that’s why going ten times bigger is more important and works better than going 10 percent bigger when you shoot for 10 percent better you’re in a smartness contest you’re putting all of your people in a smartness contest with everyone else in the world they’re not gonna win it doesn’t matter how much money you give them but if you push them if you give them the expectation and the freedom to be weird that’s moonshot thinking then they can do the perspective shifts and not only if you shoot for ten times bigger instead of 10% bigger it’s almost never a hundred times harder and the payoff is a hundred times so you already know that you’ve got a better return on your investment but sometimes it’s literally easier and the reason is because that perspective shift is actually cheap relative to being smarter than everyone around you.

Astro Teller also pointed out the importance of creating a context where moonshot thinking becomes the rule. That is according to him the most challenging part. Once you have the context, you’re ready for the rest!

Give up on incremental changes

An incremental change is as hard if not harder than a massive change. Why? You compete against others to find a solution to a similar problem. What if you switch the perspective and ask a different kind of question. For instance, when it comes to growth, it is a usual pattern to see business owners think in terms of “how do I grow my business 30% this year?”

With that thinking, you’ll look for conventional solutions, in many cases prepackaged by others. You’ll look at old formulas to new problems and stick with it until you end up with a failed enterprise. Instead, if you start asking, “how do I grow my business 10X?” that changes everything!

All of a sudden, you need to look for a new solution; you need to get creative, and obsessed about the original question you have in your mind. There won’t be anyone out there able to give you the answer, but you only. That’s when you start embracing a 10X attitude!

The 10X attitude requires an audacious vision, yet also a creative way to think about the problem, and it starts from first principles.

It all starts by reasoning from first principles

In every systematic inquiry (methodos) where there are first principles, or causes, or elements, knowledge and science result from acquiring knowledge of these; for we think we know something just in case we acquire knowledge of the primary causes

As pointed out on Wikipedia, reasoning from first principles means digging into primary causes.

A good part of the modern world has been built on assumptions that primarily took place anywhere between the 1800s and the beginning of the 1900s. Many of those assumptions, if further questioned, can turn into first principles — a set of assumptions that can’t be further examined. Where in the scientific world, going to first principles means getting closer to nature. In the business world, that might mean to ask the right question rather than to stick to a question that anyone else is asking.

Target the impossible but make it actionable

In most cases, a failure in achieving results is not due to setting up a too ambitious goal. Quite the opposite, as Grant Gardone points out in the 10X Rule in many cases, failure is due to an objective which was not ambitious. Not only that, it was not actionable enough. Indeed, to start making the impossible happen, you need to have a clear direction and be able to take massive actions!

Fail most of the time

There’s no playbook for taking moonshots — and we like it that way. Building things that are on the edge of the impossible means we have to embrace ambiguity and be prepared to tinker, experiment, and learn our way into the future. Responsibly irresponsible, we live in the sweet spot between audacity and humility, idealistic and pragmatic. Passionately dispassionate, we ask hard questions, seek out diverse perspectives, and find inspiration in weird and unexpected places.

As pointed out on Google X, there is no playbook for moonshot thinking. Yet it starts from embracing ambiguity and finding the sweet spot between audacity and humility, between being idealistic and pragmatic. On the edge of a continuous flow where bold solutions come out regularly.

Do the hardest thing first

One regular thinking pattern in business is about starting from simple problems, solve them, and build up a business that might survive for a few years. If you aim to build a business that nonetheless the current swift changes, will endure for decades to come you need to start from the hardest problem, one that seems unsolvable and that has a component of social responsibility in it.

Once you’ve committed to the moonshot thinking, and you apply the 10X rule, it comes the time to take massive action. No longer you can afford to make the same level of efforts that average people take; you need to take a 100X.

You need to breathe the problem you want to solve; you need to identify with it. It is a sort of obsession that gets close to madness, yet only for those looking from the outside. For you, that mindset means taking a level of actions that just a few people in the world can.

T-shaped people have now become an essential part of the business world. As the story goes, a T-shaped profile is a person that has a deep understanding and expertise in one or two areas and a broad knowledge of several other areas:

The problem with a T-shaped profile is that it won’t get you to reach the ambitious vision you have. I consider myself a T-shaped profile, yet I’m aware of its limitations. In other words, as a T-shaped, I would not be able to have the ability to move a small team toward a 10X goal.

However, if you want to hit it big, you need to start adding authoritativeness and leadership as critical skills. That is when you make the jump from T-shaped to an X-shaped profile!

Thus, the X-shaped is together a T-shaped profile and a recognized leader within the organization!

Why 10X thinking is cheaper than incremental thinking, in the long-run

Many believe that 10X thinking is expensive and requires a lot of resources. Instead, 10X thinking is just the opposite. It is about finding inexpensive, creative solutions to hard questions.

It also involves a lot of failure along the way, yet the world becomes your laboratory, and failure becomes just another step in the growth process! Thus, in the long run, 10X thinking isn’t only inexpensive but will have a massive ROI on your business.