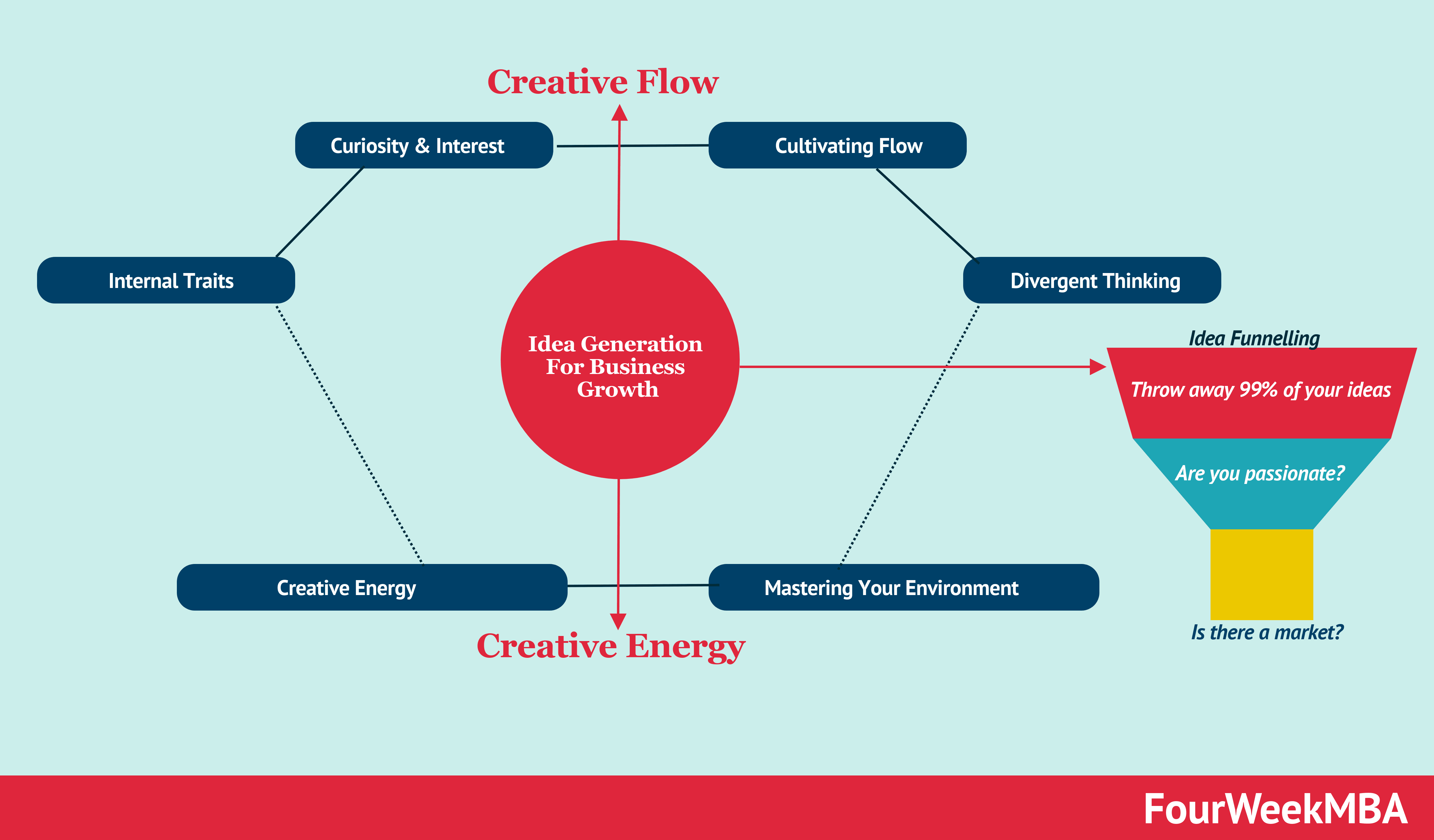 Ever since the Lean Startup became a reality, people like Eric Ries have widely built upon the belief that ideas are overrated. According to this belief, in the entrepreneurial world, success is not about having ideas.

That is instead about being able to have a framework that makes you understand what ideas make the most sense in the marketplace, what ideas to prioritize, and how to execute them.

This might be true, for successful entrepreneurs, who have mastered a set of habits that enable them to be able to generate a decent number of ideas in the first place.

What about those people who have trouble generating ideas?

For that matter, I’ve put together a framework that you can use to put yourself in the creativity zone, which will enable you to have such a vast number of ideas, that the only problem left will be how to validate those ideas, and how to build a viable business model.

Why anyone can be creative

The common belief is that you are either born creative, or you will never be. However, this belief has been long contradicted by recent discoveries in neuroscience, especially tied to the plastic structure of our brains.

Whatever the circumstances of a child’s early life, and whatever the history and current state of that child, every human has the built-in power to improve, to change for the better, to significantly restore and often to recover. Tomorrow, that person you see in the mirror can be a stronger, more capable, livelier, more powerfully centered, and still-growing person.

This is not rhetoric, but the fruit of a scientific inquiry that over the last decades has shown how our brain is elastic and plastic.

Which in practice means that with the proper habits in place you can tweak your brain to work in your favor. And in particular, you can enhance your creative flow. Thus, having a continuous flow of ideas, that you can test in the real world, to build viable business models.

Getting into the Flow process

Have you ever experienced a feeling of oneness with the activity you were performing? In short, you got to the point of mastering a task, like playing the piano, writing, or running, that at a certain stage, you felt a feeling of “flow.”

According to psychologist Michael Csikszentmihalyi, author of Flow, that feeling, which he calls “flow” is a sort of balance between boredom and anxiety, where both are at a level that becomes a flow state of mind.

Therefore, when you’re challenged in, for instance, playing the piano, you will feel a minimum level of stress; at the same time though, that stress will be coupled with a level of skills which is aligned to the fact that if you do improve, you’ll also be able to play piano better than before.

That motivation to improve will move you toward this state of flow, which, according to Michael Csikszentmihalyi, is at the core of improving at anything you do. And you can leverage this concept to enter into the creativity zone.

Creativity can be manufactured

Michael Csikszentmihalyi also authored a book, called Creativity, which is a window into how to understand the creative process and therefore enhance your own creativity, to have a continuous flow of ideas which you can experiment back into your business.

More precisely, Csikszentmihalyi divides the domains that can help you tap into the creativity flow in:

Acquisition of creativity and interest

He breaks it down further by looking at three essential habits to master:

In business, we like to do things with an objective. However, often, creativity is about enjoying and paying attention to things on their own sake.

Thus, strengthening your curiosity and interest can be done by focusing our attention on new things, or things that surround us, trying to look at them from several perspectives and with a fresh and new eye.

This process can be further enhanced if a journal is kept, which is an excellent way to record this process and learn about your internal state of mind and how to express it.

Another meaningful way is to go for things that spark your interest, beyond the domain of business, which can sharpen your creative flow, that in turn might be applied back to the business world when you expect the least.

The state of flow is fundamental to get in the creative process and come up with ideas that might impact your life and business. This state of flow implies focused attention on things around you.

That also means in trying to control as much as possible the environment around you.

Try to control your schedule in a way that you find the rhythms that work out best for you. For instance, if at night, your creative flow is at its height, take a bit of time to put down your ideas, which you might want to experiment throughout the week or month.

Also enable yourself to have some time to relax your mind and reflect, without distraction. As many entrepreneurs like to be always busy, they hardly find some time to reflect. However, relaxation and reflection, free from any activity, can be an incredible enhancer for productivity.

Just doing something differently from how it is usually done, and by breaking the usual schedule, can also help boost the creative flow, and work as idea generation strategy.

Another important strategy is to make sure your office or daily environment is organized in a way that can help the creative process.

In the long run, you want to maximize the things you like, and gradually get rid of the things you don’t like. I know it might sound trivial or unfeasible for some. But remember, we’re talking about the long-run.

If you live a frustrating life, there will probably be no space left for creativity, as invasive, distracting, and negative thoughts will take control over you. Thus, create leverage by time to time, to organize your life so that most of the time, you like what you do.

This will, in turn, enhance your energies, thus making your creative flow at the point in which ideas will come naturally, and the only thing left is to validate them!

Mastering your internal habits is about initially manipulating on purpose your attention to focus on things differently.

To develop a new perspective, to look at things from different angles. Over time this exercise, which might be extremely hard in the short term, will become automatic.

This also implies challenging yourself to develop positive traits you didn’t think you could. One suggestion from Csikszentmihalyi is to shift from openness to closure, thus moving from being open and receptive but also hard-driving and focused.

According to Csikszentmihalyi, applying your creative energy can be reduced back to three key domains:

Which is about how to find new ways to look at things around you. By learning how to express yourself, learn how to evaluate several viewpoints, consider several solutions to each problem. Learn how to implement those solutions to specific problems.

Divergent thinking is about learning how to come up with a great number of responses to problems. This implies producing as many ideas as possible, without focusing on whether those ideas are good, for now.

Try to have diverse ideas, and look at things from two opposite sides. In short, if you’re arguing, try to look also at the other side to understand that position.

Thus divergent thinking is about putting the necessary energy to get outside the routine thinking process.

Many creative people might be tempted to focus on too many domains. However, as you progress, you might want to pick a primary domain, which as you become good at it will improve your creative flow.

This, in turn, will also expand the capability to see at things in a different fashion.

Now that you set yourself to have as many ideas as possible (it might take a while to get into the creative flow) it is time to funnel those ideas into a working business model.

Don’t be scared to throw 99% of your ideas

As you go from jotting down your ideas to thinking about executing them. You’ll figure that most of them are not viable in the first place. You won’t even need to spend money or time to understand that, it will be almost automatic.

It’s weird how our brain when an idea first strikes make us feel like it’s the most ingenious one. Yet, at a further reflection, just a few hours later, when we sit down and think about executing it becomes worthless right away.

I know that some of you might think that business is not about passion but about the opportunity. This is true only in part. Businesses that start from scratch before they take off (except very rare occasions) take time to build.

This will be extremely important to pass through the first phase before the flywheel is ready to gain traction and momentum.

Idea validation: Is there a market demand?

At the stage in which you’re left with those ideas that seem still good when you sit down, and you think about executing them. It is time to understand whether the market might want them.

For that sake a framework like pretotyping, or the leaner canvas. Those are very fast frameworks to validate your ideas, before wasting time and resources in trying to build something none will want.

A market doesn’t mean an industry. Also a niche market, where a thousand people can benefit and are willing it has the potential to become a six figures business in no time.

For that sake, you might want to understand what pieces make up your business model. And what frameworks you can use.

Also, you can consult the FourWeekMBA canvas. At this stage, it is essential you have a solid framework to test only the ideas that can become a business in the real world.

Leverage On Translation To Internationalize Your Business

The opportunities ahead of you when you start your own business are incredible. Your startup is your chance to put...