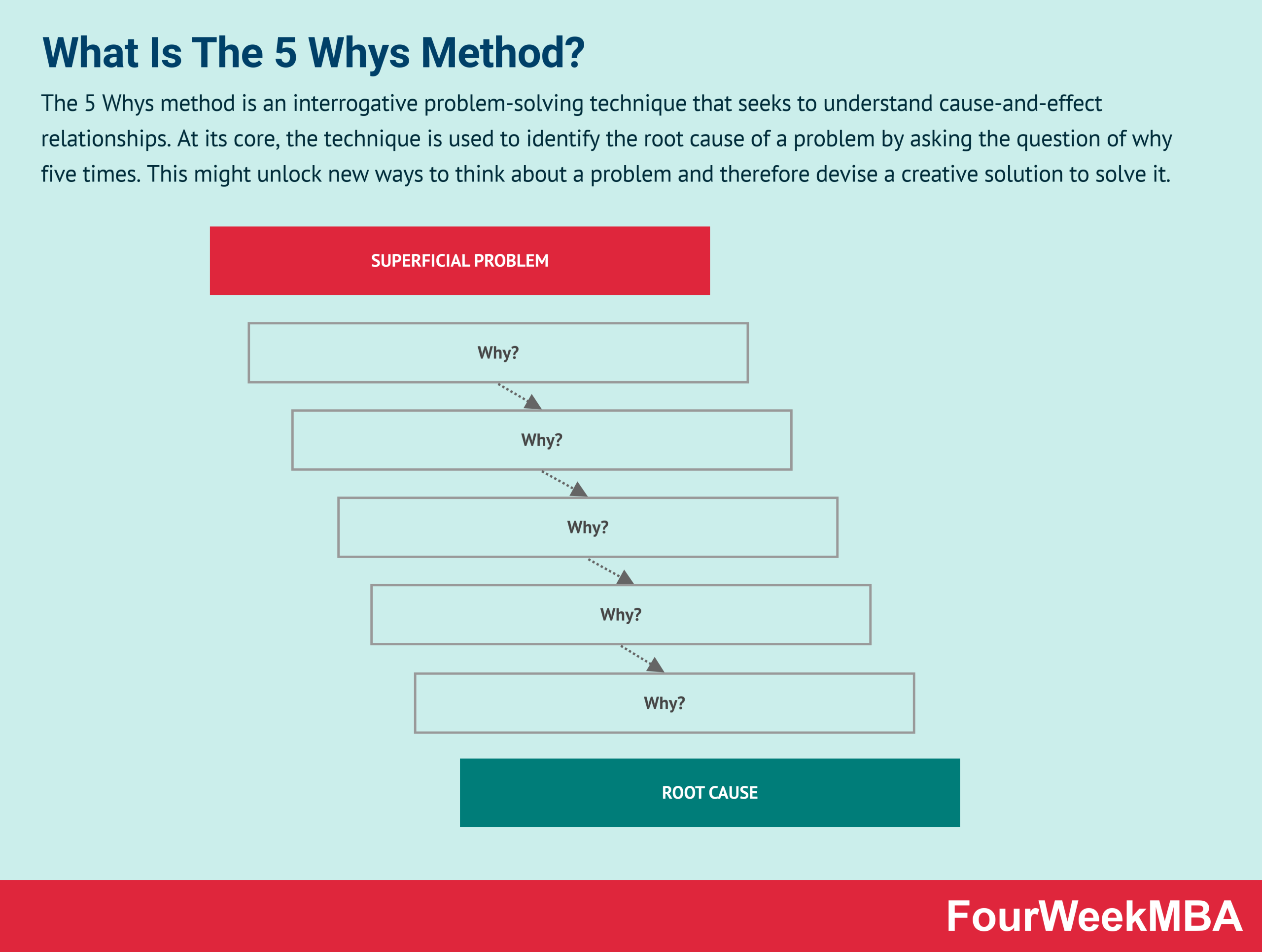 The 5 Whys method is an interrogative problem-solving technique that seeks to understand cause-and-effect relationships. At its core, the technique is used to identify the root cause of a problem by asking the question of why five times. This might unlock new ways to think about a problem and therefore devise a creative solution to solve it.

The 5 Whys method was instituted by Toyota employee Taiichi Ohno in the 1950s.

Ohno developed the technique as the basis of Toyota’s scientific approach to problem-solving. He argued that “by repeating why five times, the nature of the problem as well as its solution becomes clear.”

In modern business, the method has expanded well beyond the automotive industry. It is especially popular in the lean development of software, itself based on Toyota’s minimum waste and maximum value ethos in production line manufacturing.

Regardless of the industry however, the 5 Whys Method is effective at addressing recurring problems. By their very nature, these problems recur because their root cause has not been identified. A business with such a problem is only treating the symptoms of that problem and does not have a strategy to completely address it.

Implementing the 5 Whys Method in practice

There are several steps to undertaking the 5 Whys Method, outlined below.

Ideally, the 5 Whys method should not be undertaken by a sole individual. A team should instead consist of members that are experienced in dealing with the problem concerned. Each team member should also be encouraged to share their unique insights and point of view.

The problem must be identified and agreed upon, because it very much dictates the direction of the five questions that follow. Wherever possible, the team must identify problems with process, and not personnel.

The scope of the problem must also adequately be described. A problem with too broad a scope will be resource-intensive to address and may inadvertently conflict with company values or strategy. Too narrow a scope may result in insignificant improvements that do little to prevent problem recurrence.

Next, a mediator should begin the process of asking why. Each time the question is asked, the answers should be based on facts or hard data. They should not be based on often emotional answers that are given by team members. The team should move through each level of the method so long as there is potential for the problem to occur.

Here, it’s important to note that some root causes may be identified in less than 5 steps. Others may require more than five.

Once the root cause has been determined, a list of solutions must be created to address it. Although not expressly a part of the 5 Whys method, many businesses choose to use the 5 How strategy in solution development.

This involves taking each root cause and asking “How?” a further five times until the root solution is arrived at. Irrespective of how solutions are formulated, the business must test them in a workplace scenario. If they are found to be ineffective, then the 5 Whys method should be repeated from the start.