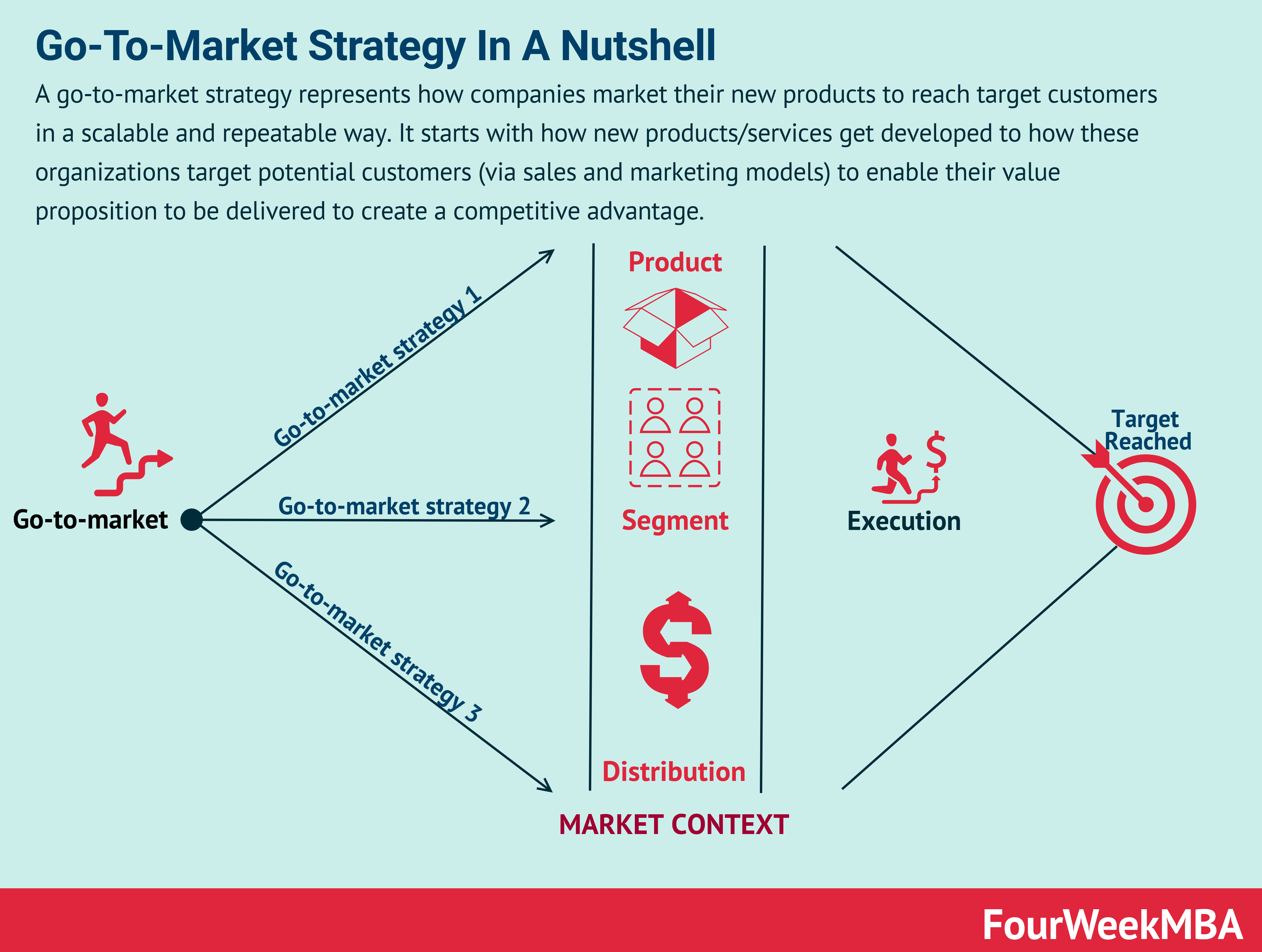 A go-to-market strategy represents how companies market their new products to reach target customers in a scalable and repeatable way. It starts with how new products/services get developed to how these organizations target potential customers (via sales and marketing models) to enable their value proposition to be delivered to create a competitive advantage.

What do you take into account in a go-to-market strategy?

When launching new products successfully there are a few elements to take into account:

In today’s digital landscape, when it comes to digital products or physical products that have digital components, built-in growth features enable a successful go-to-market strategy.

For instance, frameworks like growth hacking; engineering, data analysis, and marketing come together to enable a successful product launch.

That’s because product features can switch on the viral growth engine, thus speeding up adoption. Companies like Dropbox, Slack, and Zoom know that pretty well.

Other elements like market segmentation (where do we start? who do we target?), and pricing can be critical elements to build up momentum. For instance, Facebook started from specific niches, at selected campuses across the US, before opening up to anyone else.

A great product without proper distribution won’t go far, or too far. Distribution can be built in several ways. And based on the kind of product, you will structure your organization’s go-to-market strategy.

For instance, for the kind of product type and whether the market is ready or not for that, do you need a sales force able to deal with large enterprise customers? Or rather marketing power to push through a larger number of people?

For that, it will be extremely important to understand the market context:

And from there elaborate a growth/launch strategy:

In most cases, the market entry strategy can vary based on how crowded is the market, whether customers are used to the kind of product you’re offering, and perhaps if you’re offering something wholly new, either because its a whole new product or it has never been done in that geographic market.

Business model innovation, therefore, becomes a function of a much better product, or the ability to cut out fragmented intermediaries that extract value from the market. Or yet, by redesigning the whole customer value chain.

As new companies enter existing markets or create new ones, they tend to master a mixture of product, distribution and value innovation as a competitive advantage.

Zoom defines its go-to-market as a “multipronged go-to-market strategy for optimal efficiency.” It starts with “viral enthusiasm” triggered by users as they join the platform for free.

The good experience is channeled by sales efforts to identify customers opportunities, such to transform a non-paying user into an enterprise customer.

Those are organized by customer employee count and vertical.

In short, Zoom the workflow looks like he following:

This sort of go-to-market is skewed toward product and distribution.

The process of standardization of the experience starts with what OYO claims to be a 150 point checklist that goes from the booking experience to the support center and the on-ground Cluster Managers, ready to solve any problem it might arise during the experience of guests.

Thus the go-to-market (expansion) strategy looks like the following:

This sort of go-to-market is skewed toward distribution.

Partnerships as a go-to-market strategy

In some other cases, a successful go-to-market strategy can be primarily about finding the platform or the partner that can help your product to gain the right amount of traction.

From Tesla’s mission, it’s clear that the company wants to become in the long-run a mass-adopted car company. Yet, when it launched, it was all but a mass-market organization. An outside looker might have had the impression that Tesla was just a sports car company, coming up with a great electric alternative.

However, that was just a go-to-market strategy used by Tesla to enter an extremely competitive market, which required massive capital to survive in the first place. Tesla, instead of going for a model that would compete with all the other sedan car companies in the middle and lower segment of the market.

The company opted for a go-to-market strategy that was the only feasible at the time. It built a sport’s car, that was interesting only to a relatively small audience, and yet it was competitive.

Sport’s cars have much higher prices compared to other models (like sedan), and perhaps the person buying that type of car might be less sensitive to price itself. That is how Tesla slowly built up its strategy to cover larger spaces within the car industry.

And while Tesla is still a smaller player in terms of volume of car produced, as of 2020, compared to companies like Ford and GM, it is rolling out its strategy to become a mass-market electric car company. As this is a complete market change, it will still require a few years for this strategy to roll out successfully.

When Netflix started its operations, it did that in the most feasible way at the time, as a DVD-rental company.

That was the most viable way to start a business that could compete with existing players like Blockbuster. Netflix could have tried to play it bigger. Netflix had known for years that being a competitive player in the DVD-rental space, was “just the beginning of something else.”

Yet the first time “streaming” was announced on Netflix plan was in the 2007 annual report, presented in 2008, and by 2009 annual report the term “streaming” would be mentioned 88 times (FourWeekMBA analysis). That is when things started to pick up and Netflix moved away from its go-to-market strategy.

It took over a decade from its foundation, for Netflix, to see its strategy to roll out fully!

As the story goes, in 2007, Brian Chesky and Joe Gebbia couldn’t afford the rent on their San Francisco apartment that is why they decided to transform their loft in a lodging space.

Yet instead of relying on Craiglist, they built their site, which they called Airbed & Breakfast and leveraged on Craigslist to drive users back to their website,

Therefore, Airbnb, to gain initial traction, used what is known in growth marketing as OPN (or other people’s network). It surfed a giant at the time (and still), Craigslist.

To be sure, Airbnb didn’t just gain visibility on Craigslist. Instead, it surfed the site to push its platform. A platform business model to take off run into the so-called chicken and egg problem.

In short, a platform differently from a linear business, to gain initial traction has to kick off its operations on often different sides. For instance, for Airbnb, it was critical to enhance the listings available on the platform to make it valuable for users, and vice versa.

The more users joined, the more it would attract listings. Where to start? Back in 2010, Airbnb figured a mechanism and automation that enabled listings on the platform to be reposted on Craigslist, thus generating substantial traffic.

In addition, those who searched for listings on Airbnb were users looking for alternatives to Hotels, so a great target. By using this initial strategy Airbnb managed to solve its initial growth phase.

In a FourWeekMBA analysis to dissect the Coca-Cola system, the company uses a template wherein the short term its new operations are controlled and the company keeps a controlling equity stake in the new venture.

As soon as it takes off, the operation goes back from chain to the franchise. Thus the company divests its controlling stakes and in the long-run that becomes a franchising agreement.

From there, the concept of “franchained.” This go-to-market strategy has worked pretty well for Coca-Cola since 2003, to enter new markets by leveraging on its scale, by controlling the new venture, and after that leaving it independent, by tied to Coca-Cola with a franchising agreement.

DuckDuckGo, differentiating the value proposition to gain traction over the dominating giant

As I explained in privacy as business model, DuckDuckGo used a clearly differentiated value proposition compared to Google. Therefore, even if it entered the search industry quite late, over the years it kept growing.