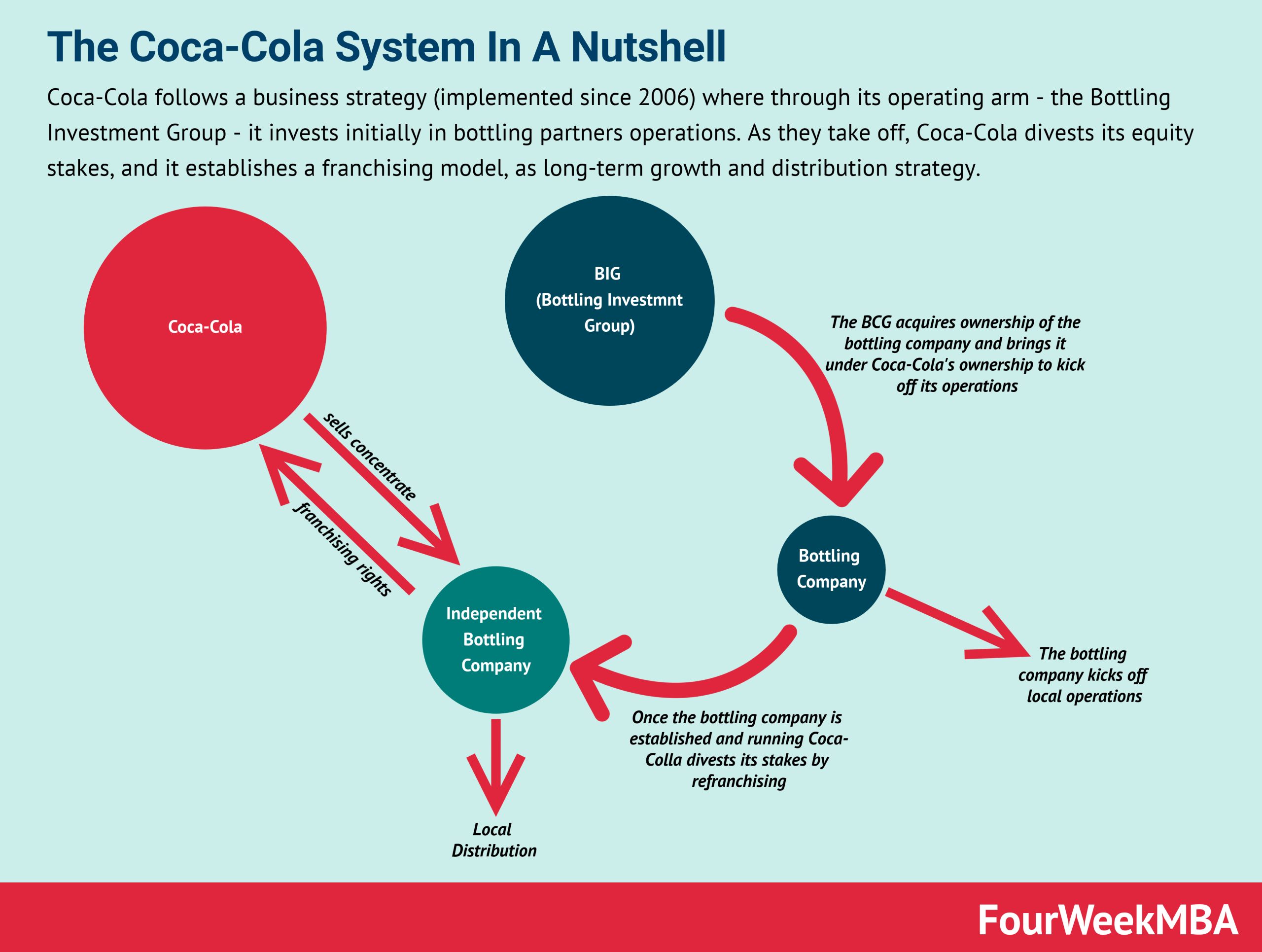 Coca-Cola follows a business strategy (implemented since 2006) where through its operating arm – the Bottling Investment Group – it invests initially in bottling partners’ operations. As they take off, Coca-Cola divests its equity stakes, and it establishes a franchising model, as long-term growth and distribution strategy.

The Coca-Cola Company business model is based on five large independent bottling partners. In 2019, these five bottling partners combined represented 40 percent of the total unit case volume the company sold.

Coca-Cola has separate agreements with bottling partners for both manufacturing and sales of the company’s products. As specified by Coca-Cola “the bottler’s agreements generally authorize the bottlers to prepare, package, distribute and sell Company Trademark Beverages in authorized containers in an identified territory. The bottler is obligated to purchase its entire requirement of concentrates or syrups for the designated Company Trademark Beverages from the Company or Company-authorized suppliers.”

Coca-Cola typically agrees to refrain from selling or distributing, or from authorized third parties to sell or distribute, the Company Trademark Beverages throughout the identified territory, to guarantee bottling partner exclusivity under that territory and product.

However, Coca-Cola typically reserves for itself the right to manufacture and distribute its trademarked products and brands.

The strategy of Coca-Cola when it comes to building, growing, and maintaining its distribution system is pretty fluid. Indeed, in most cases, Coca-Cola leverages a network of independent bottling partners.

This mixed distribution system of owned and non-owned bottling partners is the Coca-Cola system which sold 30.3 billion unit cases by 2019. Trademark Coca-Cola accounted for 43 percent of U.S. unit case volume.

Therefore, it will sell its controlling stake, having a franchisor-franchisee relationship with those bottling partners, and in some cases, it might keep a minor equity stake to keep more control over the operations.

In 2018, for instance, Coca-Cola had a few hundred million in proceeds as it re-franchised its Canadian and Latin American bottling operations. This is how Coca-Cola keeps its CAPEX low, while still keeping control of the bottling operations, and yet enabling expansion and capillary distribution!

This is how Coca-Cola represents its system:

To handle those operations, Coca-Cola introduced in 2006 the Bottling Investment Group, which managed the acquisition, divestment, and re-franchising of the bottling operations.

The graphic below gives a good picture of the overall process and strategy which has been implemented since 2006: