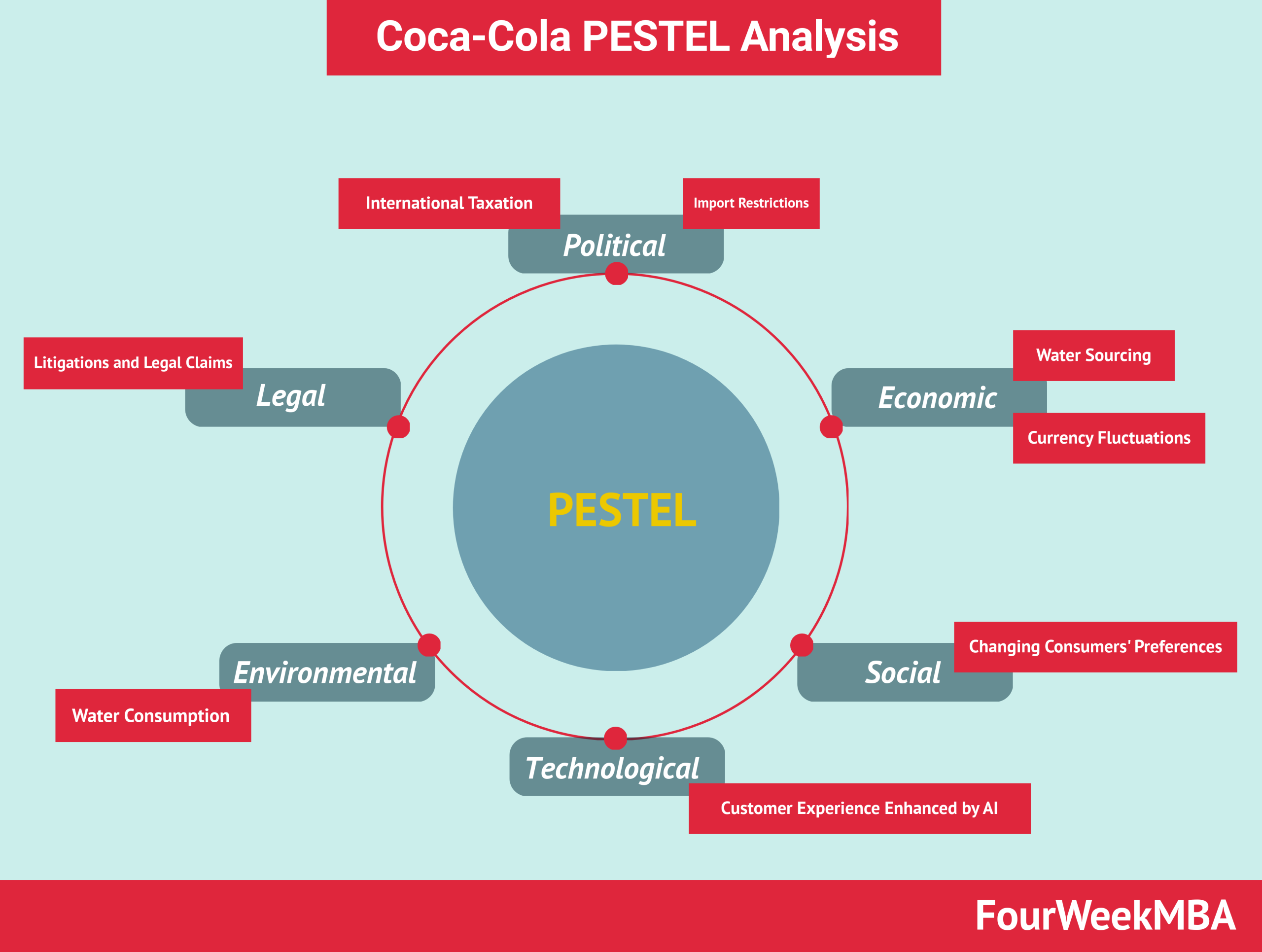 The Coca-Cola Company is one of the world’s leading non-alcoholic beverage companies.

It operates in virtually all of the world’s countries, offering more than 500 brands across bottled water, soft drinks, energy drinks, tea, and fruit juice.

The vast global reach of Coca-Cola means it is not immune to external marketplace factors. Indeed, company revenue has been in steady decline since 2013.

Cuba and North Korea are the only countries where Coca-Cola products cannot be bought or sold illegally. Both countries are currently subject to sustained United States trade embargoes.

The company is not immune to challenges in the rest of the world either. Steel and aluminum tariffs imposed by Mexico, Canada, and the European Union have increased raw material costs.

Coca-Cola is also vulnerable to sugar taxes imposed by bodies such as the Food and Drug Administration (FDA).

Sourcing adequate water is a major problem for the Coca-Cola company. In many parts of the world, water scarcity is affecting manufacturing operations. Higher costs also impact the company’s bottom line.

Currency fluctuations are also an economic factor. Hyper-inflation in countries such as Venezuela has eroded profits for the company.

Consumer preference for soft drinks has been on the wane for several years or even decades in some cases. In response, Coca-Cola has taken steps to appeal to more health-conscious customers with low sugar beverages and marketing campaigns designed to change public brand perception.

The company also faces social pressure in many Middle Eastern countries where anti-American sentiment is high.

Social media advertising has been a boon for Coca-Cola as it attempts to engage with the next generation of adult consumers. Many products also have QR codes that consumers can scan to unlock experiences and prizes.

Furthermore, the company is using artificial intelligence and big data to analyze market trends and optimize its global supply chain.

Coca-Cola is no stranger to litigation. And in the future legal claims might affect the company’s financial viability.

Coca-Cola has been touted as the biggest consumer of fresh water in the world. In India, underground aquifers have been depleted to the detriment of the local population.

The company is taking steps to use water more efficiently. In Africa, smart agricultural programs like CARE and RAIN teach farmers to increase yields sustainably.

In the face of climate change however, Coca-Cola faces an uncertain feature given their products are predominantly water.

Background Apple is a company that has fundamentally changed aspects of the way we communicate with each other. Founded in...