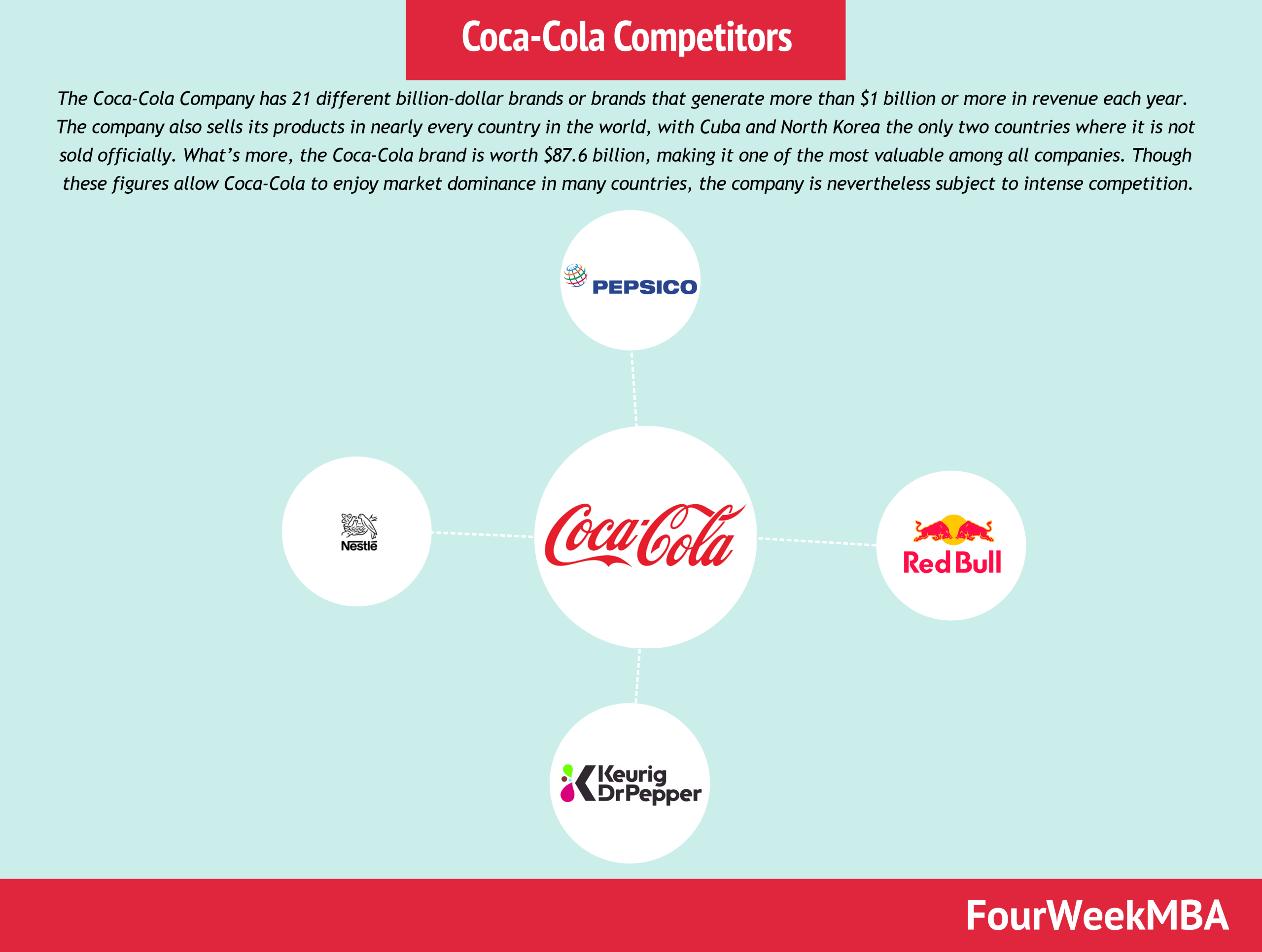 The Coca-Cola Company has 21 different billion-dollar brands or brands that generate more than $1 billion or more in revenue each year.  The company also sells its products in nearly every country in the world, with Cuba and North Korea the only two countries where it is not sold officially. What’s more, the Coca-Cola brand is worth $87.6 billion, making it one of the most valuable among all companies. Though these figures allow Coca-Cola to enjoy market dominance in many countries, the company is nevertheless subject to intense competition.

No article on Coca-Cola competitors would be complete without mentioning PepsiCo.

Based on net revenue, profit, and market capitalization, PepsiCo is the second-largest food and beverage business globally behind Nestlé. Indeed, PepsiCo’s diversified portfolio enables it to earn more revenue in North America than Coca-Cola despite not selling as many beverages.

Coca-Cola and Pepsi compete in several categories, including soda beverages, health and energy drinks, bottled water, and juices. The rivalry between these two companies has been labeled the Cola Wars, characterized by mutually targeted marketing campaigns and several public and protracted legal battles.

Red Bull is an energy drink manufactured by Red Bull GmbH, an Austrian company founded in 1987 by Dietrich Mateschitz and Chaleo Yoovidhya.

Despite a somewhat limited product portfolio, Red Bull has a significant following in North America, Europe, Australia, and parts of Asia.

This following is the result of targeted marketing campaigns aimed at young men where the drink is associated with extreme sports such as mountain biking, parkour, Formula 1 racing, NASCAR racing, freestyle motocross, and air racing.

After sluggish sales, Coca-Cola announced plans to stop selling its energy drinks in the United States and Canada by the end of 2021.

While the company does not enjoy the global reach of Coca-Cola, it does have a diverse product range allowing it to cater to a large audience in the North American market. Some of the most popular products under the Keurig Dr Pepper umbrella include RC Cola, Schweppes, 7 Up, Snapple, and of course Dr Pepper itself.

Nestlé is a Swiss multinational food and drink conglomerate headquartered in Switzerland.

As the largest food company in the world by revenue, the company is a significant competitive threat to Coca-Cola.

Though the company does not compete with Coca-Cola in the soft drink market, Nestlé owns several popular bottled water brands, including Vittel, Perrier, S. Pellegrino, and Acqua Panna. It also owns Nespresso pre-packaged coffee and Nescafé instant coffee and has partnered with Starbucks to offer Starbucks Coffee at Home.

Furthermore, the Swiss giant owns a range of tea and other beverage brands including Nestea, Milo, Sweet Leaf Tea, and Peace Iced Tea.