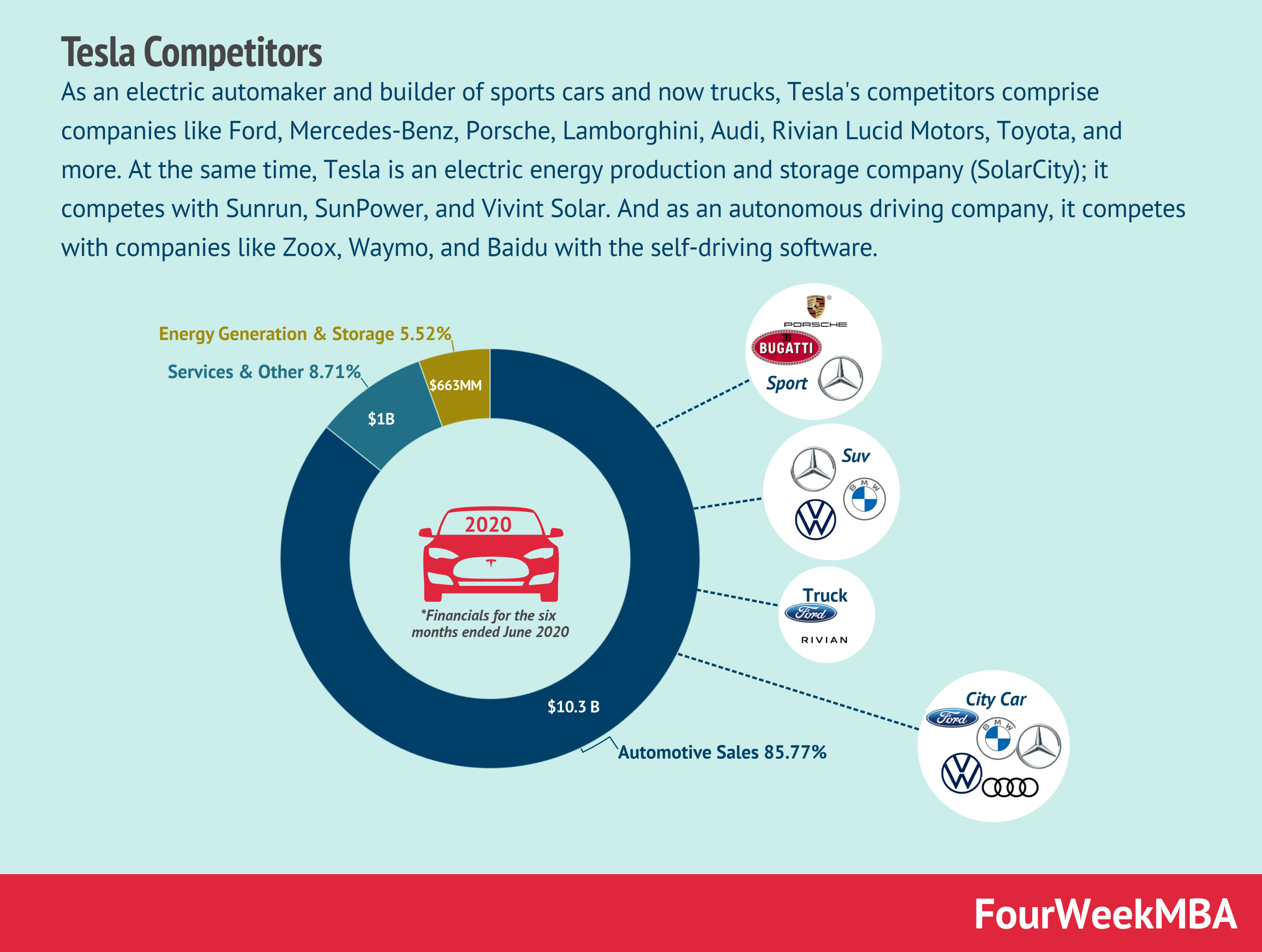 As an electric automaker and builder of sports cars and now trucks, Tesla’s competitors comprise companies like Ford, Mercedes-Benz, Porsche, Lamborghini, Audi, Rivian Lucid Motors, Toyota, and more. At the same time, Tesla is an electric energy production and storage company (SolarCity); it competes with Sunrun, SunPower, and Vivint Solar. And as an autonomous driving company, it competes with companies like Zoox, Waymo, and Baidu with the self-driving software.

Tesla isn’t just an automaker; it is an electric-only car automaker, an electric storage company, and an autonomous driving player. For that, we’ll have to analyze Tesla from these three perspectives.

Within the automaking segment, Tesla has over the years diversified its products‘ lines, to cover different segments of the market. When Tesla entered the market, as a go-to-market strategy it had to enter it (nonetheless Elon Musk’s long-term vision to make the electric car available to the masses) with the Roadster model.

While this model is still available, this is the highest-priced model and the product Tesla used to bootstrap its operations. Indeed, at the time, Tesla couldn’t produce a lower-cost electric car (Model 3 will finally achieve this goal), and that is how Tesla made its business model viable as it entered the new market for electric cars. This is what I call a transitional business model:

Over the years, as the market matures, Tesla grew, an electric ecosystem was born, and the technology to enhance battery performance improved, Tesla also expanded its products‘ lines to cover the various segments.

The primary models covering this segments are:

The primary models covering this segments are:

In this segment, Tesla just launched the Cybertruck:

Tesla has finally its mass-market product, the Model 3. This model competes with models such as BMW Series 2,3,4,5 Mercedes Class C, CLA, CLS, Audi A3, A4, A5, Lexus, ES, GS, and many others.

Tesla acquired SolarCity back in 2016, for $2.6 billion, and with that, it competes in the electric production and storage industry with players like SunRun, SunPower, Vivint Sonar, Trinity Solar, and SolarWorld to mention a few.

Tesla’s Autopilot is one of the key ingredients of its technology and one of the most interesting future developments for the company. In this segment, Tesla competes with other autonomous driving companies like Zoox (bought by Amazon), Waymo (an Alphabet bet), and Baidu.

Related: Who Owns Ferrari, Who Owns Volkswagen, Who Owns Bugatti.