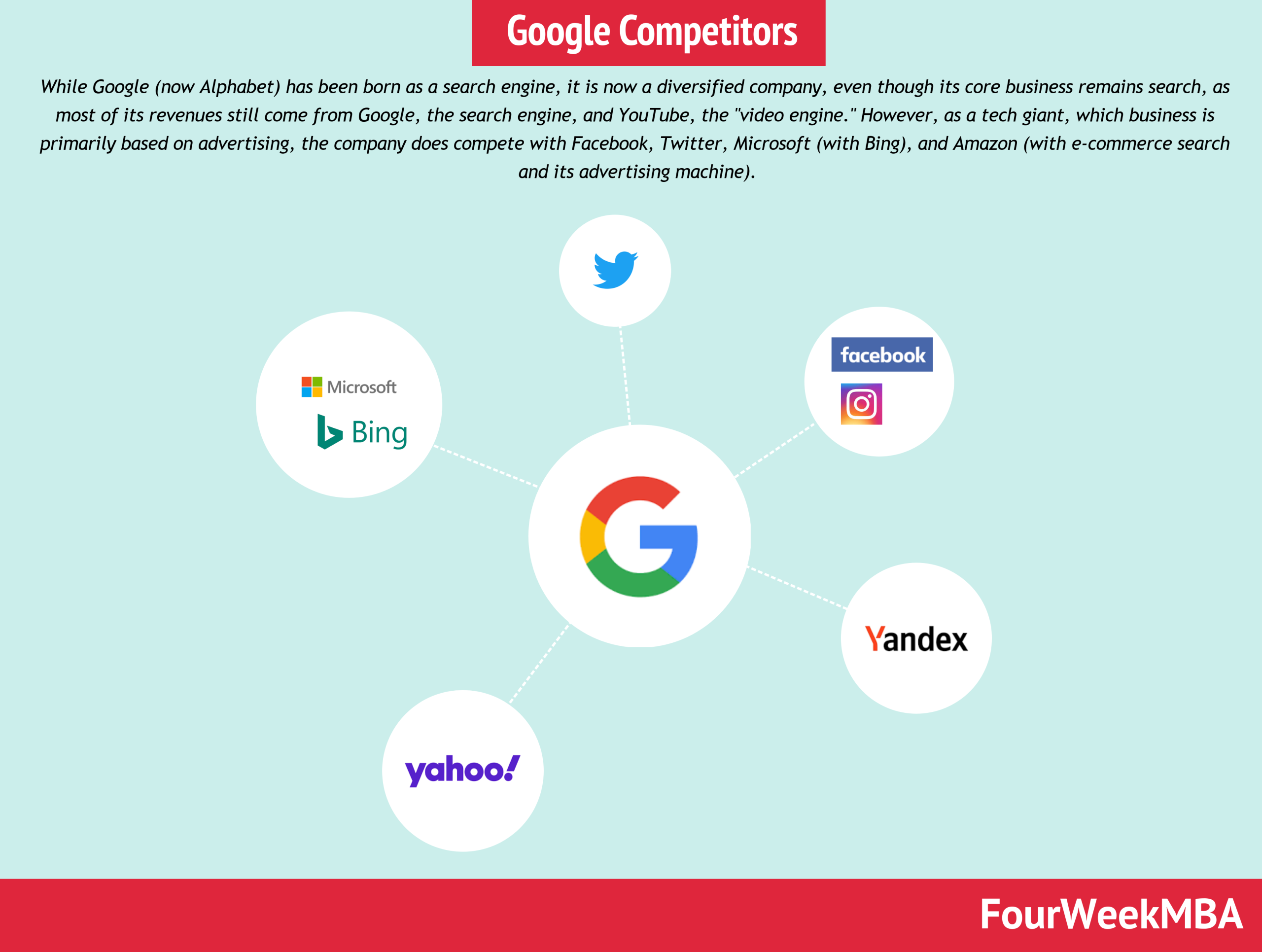 While Google (now Alphabet) has been born as a search engine, it is now a diversified company, even though its core business remains search, as most of its revenues still come from Google, the search engine, and YouTube, the “video engine.” However, as a tech giant, which business is primarily based on advertising, the company does compete with Facebook, Twitter, Microsoft (with Bing), and Amazon (with e-commerce search and its advertising machine).

When Page and Brin managed to create a search engine that was 10x better than competing engines, it made clear that search was all but a solved issue. At the end of the 1990s, Page came out with its algorithm, PageRank, which managed to rank the entire web-based on relevance and authoritativeness of the web pages it indexed.

It took off right away! It was at that point that many of Google’s competitors understood that search was just at the embryonic stage. It was by then that Google had already taken over the search market, yet revenue was still far away.

Bach in the days, Brin and Page didn’t hide their resentment toward the advertising business model, which was the prevalent model for search. Indeed, in the paper “The Anatomy of a Large-Scale Hypertextual Web Search Engine” where Page and Brin presented their first prototype of Google.

With full text and hyperlink database of at least 24 million pages, in a paragraph dedicated to advertising, they explained: “We expect that advertising funded search engines will be inherently biased towards the advertisers and away from the needs of the consumers.“

The main issue they had toward advertising was the fact that it was biased, and it caused a lot of spam in search results. Indeed, when they met Bill Gross, founder of GoTo, which would later become Overture, the encounter might not have been among the most cordial. That’s because Bill Gross had figured the advertising market had massive potential, as he introduced an auction-based system for bidding businesses based on performance and clicks.

However, this was still back when Page and Brin were two academics completing their Ph.D. at Stanford University. The transition to becoming businessmen would take soon to arrive. Indeed, as venture money was soon to be over a plan B was needed.

In addition, as Google managed to rank advertising based on relevance (for instance, by ranking higher those ads that got more clicks) advertising became a possible option. As Larry Page pointed out in the first Google letter to shareholders:

Advertising is our principal source of revenue, and the ads we provide are relevant and useful rather than intrusive and annoying.

As large and multi-dimensional as the company may be, Google is fundamentally an advertising business. The vast majority of income is earned through generating, capturing, and channeling leads who have intent to make a purchase.

Some argue this makes Facebook the main competitor of Google because users are spending more time on social media and less time using search engines. With Facebook offering an ad platform of comparable reach and functionality, advertisers will be forced to follow the money and migrate away from search engines.

As already noted, Google’s supremacy in search is unlikely to be challenged in the medium to long term. In fact, the company controls over 92% of the search market since introducing Google Search in 1997.

Competitors in the North American market such as Yahoo and Bing are thus hardly worth mentioning. But in the Chinese market, Baidu enjoys similar dominance because Google is banned from operating there.

A potential emerging competitor to Google search is Amazon. Though not a search engine in the traditional sense, many consumers now bypass Google and search for products on the Amazon website directly.

Google’s acquisition of YouTube in 2006 is a classic example of the company using its power to establish a presence in an industry.

Here, the competition is much more intense. Video platforms such as Snapchat, TikTok, Instagram, and Facebook all compete for video viewers.

Google also faces strong competition for viewers from streaming services offered by Disney, Netflix, Amazon, and Hulu. The company does not operate its own streaming platform, instead offering the somewhat underdeveloped video aggregation service Google TV.

However, it should be noted that Google TV serves ads to consumers based on their viewing history. The presence of this feature could be construed as an attempt to compensate for the revenue lost to social media platforms mentioned earlier.

In cloud computing, Google’s main competitors are Microsoft and Amazon who both have greater market share in the industry.

Amazon was launched on July 16, 1995, as a humble online bookstore operating out of the garage of founder Jeff...