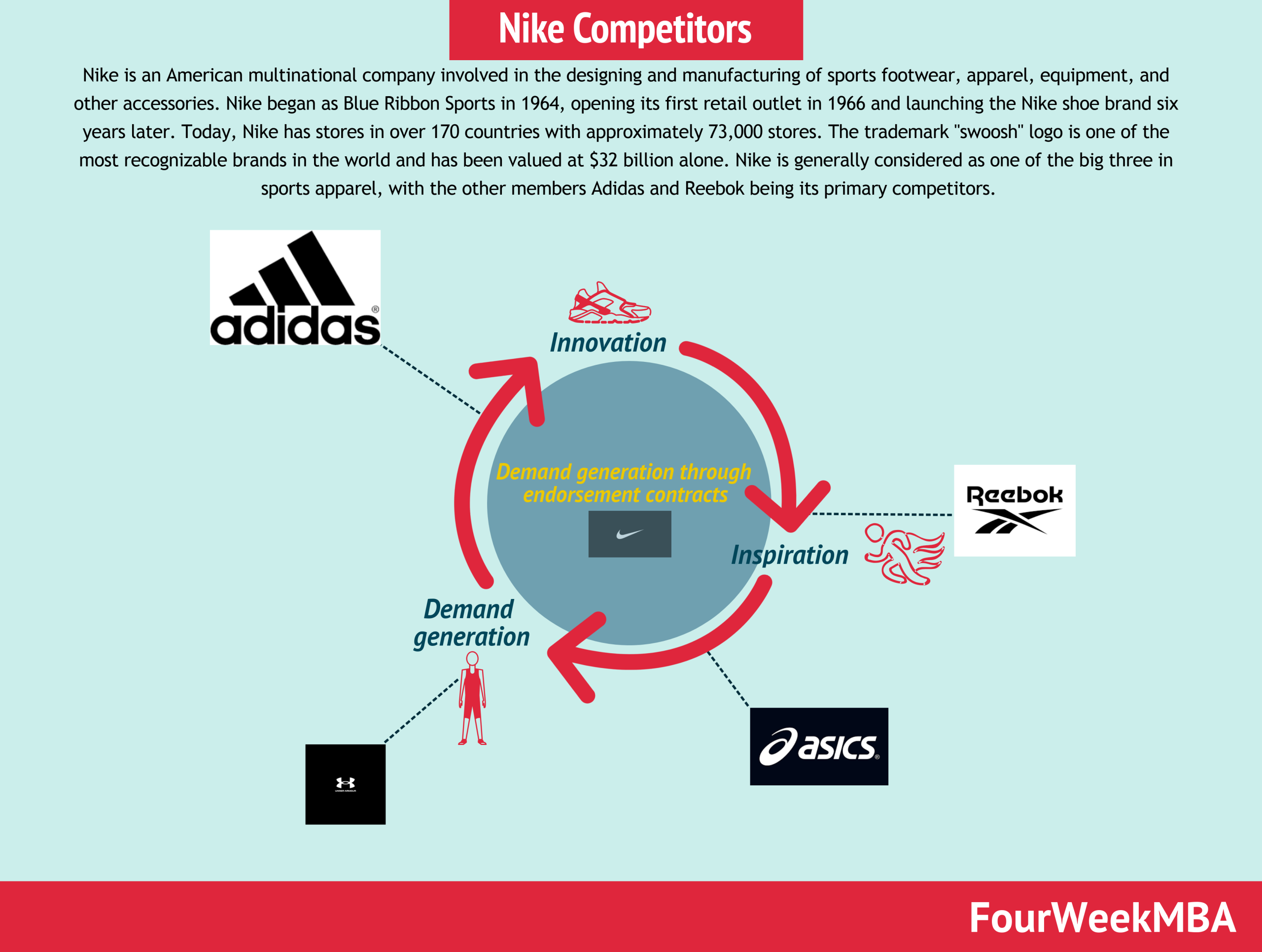 Nike is an American multinational company involved in the designing and manufacturing of sports footwear, apparel, equipment, and other accessories. Nike began as Blue Ribbon Sports in 1964, opening its first retail outlet in 1966 and launching the Nike shoe brand six years later. Today, Nike has stores in over 170 countries with approximately 73,000 stores. The trademark “swoosh” logo is one of the most recognizable brands in the world and has been valued at $32 billion alone. Nike is generally considered as one of the big three in sports apparel, with the other members Adidas and Reebok being its primary competitors.

Adidas was founded by Adolf Dassler in Germany in 1949, but the company now has a significant presence in the North American market.

Like Nike, Adidas enjoys several high-profile sponsorships as part of an aggressive marketing strategy. The company also owns brands such as Reebok and TaylorMade and controls the training technology platform Runtastic.

In an increasingly green world, Adidas has many strengths. Favoring research and development into sustainability, the company also uses organic cotton in its plastic-free products.

Although Reebok is wholly owned by Adidas, the company functions as an independent entity.

The company has a reputation for innovation in sports footwear design, releasing products such as Reebok Zig, Reebok Gym, and Reebok Pump.

It also has long-standing associations with professional sport, including football and cricket. Reebok has also invested heavily in creating a consistent ambiance across its international stores. This has created a brand identity that consumers associate with comfort, fashion, and trend-setting.

Asics is a Japanese company founded in 1949 that now has almost 900 stores in 33 countries.

While Asics sells in the USA and the UK, it has a focus on the Asian and Australasian markets where it has been a mainstay for decades.

The core focus of Asics is research and development, with a company vision of “creating quality lifestyle through intelligent sport technology”. Indeed, it has a dedicated facility where innovation is driving products that promote healthy and fulfilling lifestyles for consumers.

Nike founder Phil Knight once applied to be a sales agent for Asics USA. However, the relationship between Nike and Asics has deteriorated over the years with several litigation suits.

Under Armour was founded in the USA in 1995 by Kevin Plank.

Originally, Plank designed comfortable and lightweight sports apparel using innovative fabrics that dried quickly. The Under Armour moisture-wicking system was so successful that Nike, Adidas, and Reebok would soon release their own versions.

Today, the company has quickly grown to offer a complete line of clothing, with 300 manufacturing facilities and 41 offices worldwide.

Although Under Armour is a young company, it ranks fourth for global shoe sales. It also ranks as the fifth most valuable sports brand. Like the major players, it has secured several high-profile endorsements and affiliations securing deals with Major League Baseball, NBA, and PGA golf stars.