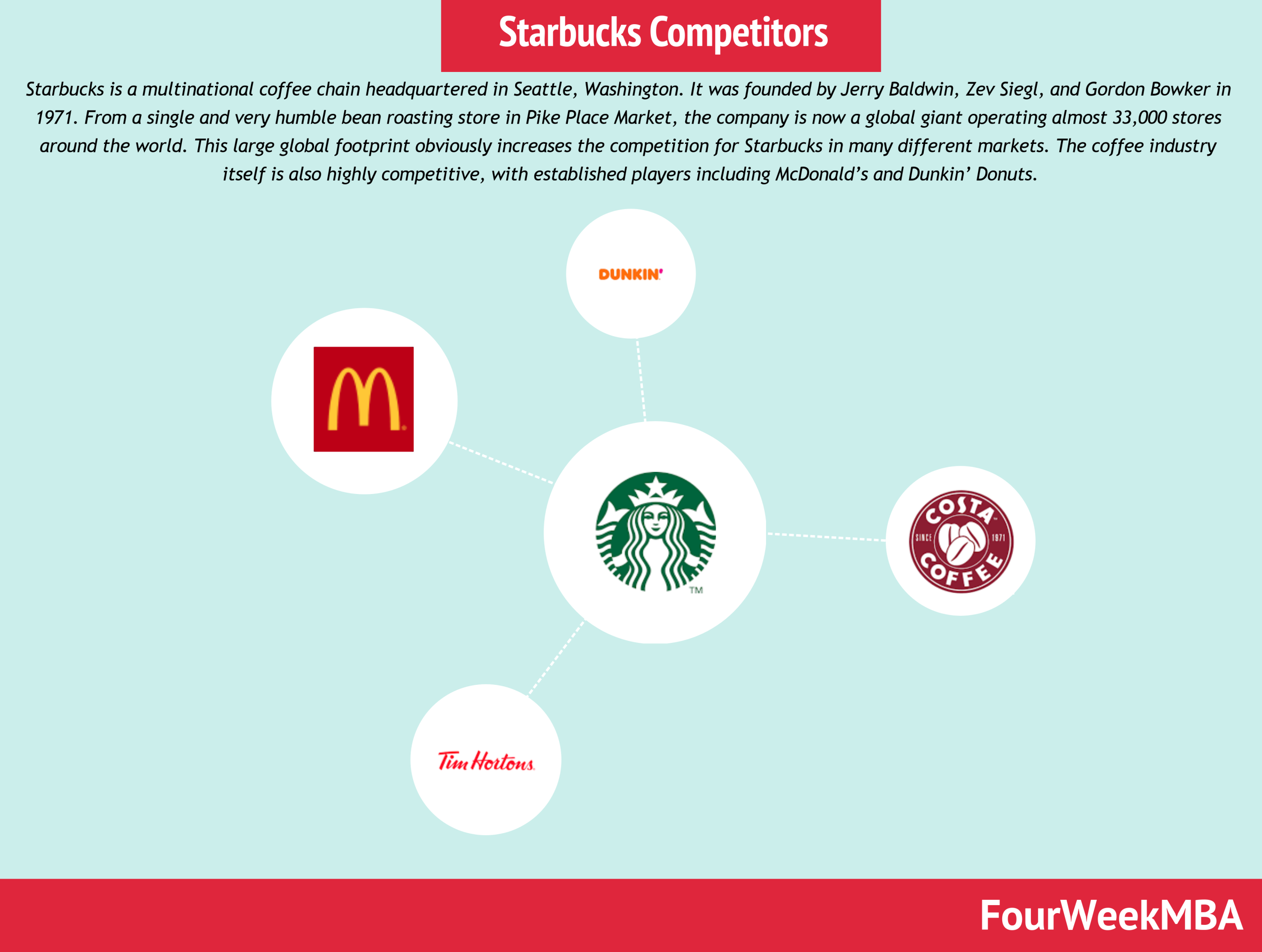 Starbucks is a multinational coffee chain headquartered in Seattle, Washington. It was founded by Jerry Baldwin, Zev Siegl, and Gordon Bowker in 1971. From a single and very humble bean roasting store in Pike Place Market, the company is now a global giant operating almost 33,000 stores around the world. This large global footprint obviously increases the competition for Starbucks in many different markets. The coffee industry itself is also highly competitive, with established players including McDonald’s and Dunkin’ Donuts.

McDonald’s may not be the first brand people associate with good coffee, but the company has made significant progress in the quality of its product offering through the McCafé chain.

The first such store opened in Australia in 1993, with more than 15,000 McDonald’s restaurants now serving hot and cold coffee-related beverages with premium beans. In terms of the number of stores opened, McDonald’s is the primary Starbucks competitor. Its competitiveness is further strengthened because the company can leverage its existing restaurant infrastructure to serve coffee.

In 2014, McDonald’s also started selling a range of coffee pods to compete with similar Starbucks products.

Dunkin’ Donuts is an American multinational coffee and doughnut company founded in 1950 by William Rosenberg. The company operates in almost 13,000 locations across 42 countries.

Although the company moved away from marketing itself as a coffee chain in the 90s, it introduced a specialty coffee line a decade later. Dunkin’ Donuts then launched its “American Runs on Dunkin'” advertising campaign, promoting itself as an All-American brand for the average consumer.

In addition to coffee and donuts, the chain also sells sandwiches, frozen beverages, bagels, and tea.

Costa Coffee is a major European competitor of Starbucks, with over 2,000 stores in the United Kingdom alone. Furthermore, the company operates over 6,000 Costa Express vending machine facilities.

Realizing its potential in non-North American markets, The Coca-Cola Company acquired Costa Coffee in 2019 for £3.9 billion. Ultimately, this gave the beverage giant a strong foothold in coffee and related products across parts of Europe, Africa, Asia Pacific, and the Middle East.

In terms of value for money, not many coffee chain companies can compete with the Canadian brand Tim Hortons. Starbucks is no exception.

Tim Hortons was founded in 1964 by former professional ice hockey player Tim Horton together with Jim Charade. The chain is a Canadian institution, with almost 5,000 quick-service restaurants in 14 countries.

The company offers a range of products, including muffins, cookies, pastries, bagels, and Greek yogurt with mixed berries. It also sells products under the Tims at Home banner, encompassing everyday essentials such as instant tea and coffee, hot chocolate, soup, and granola bars.