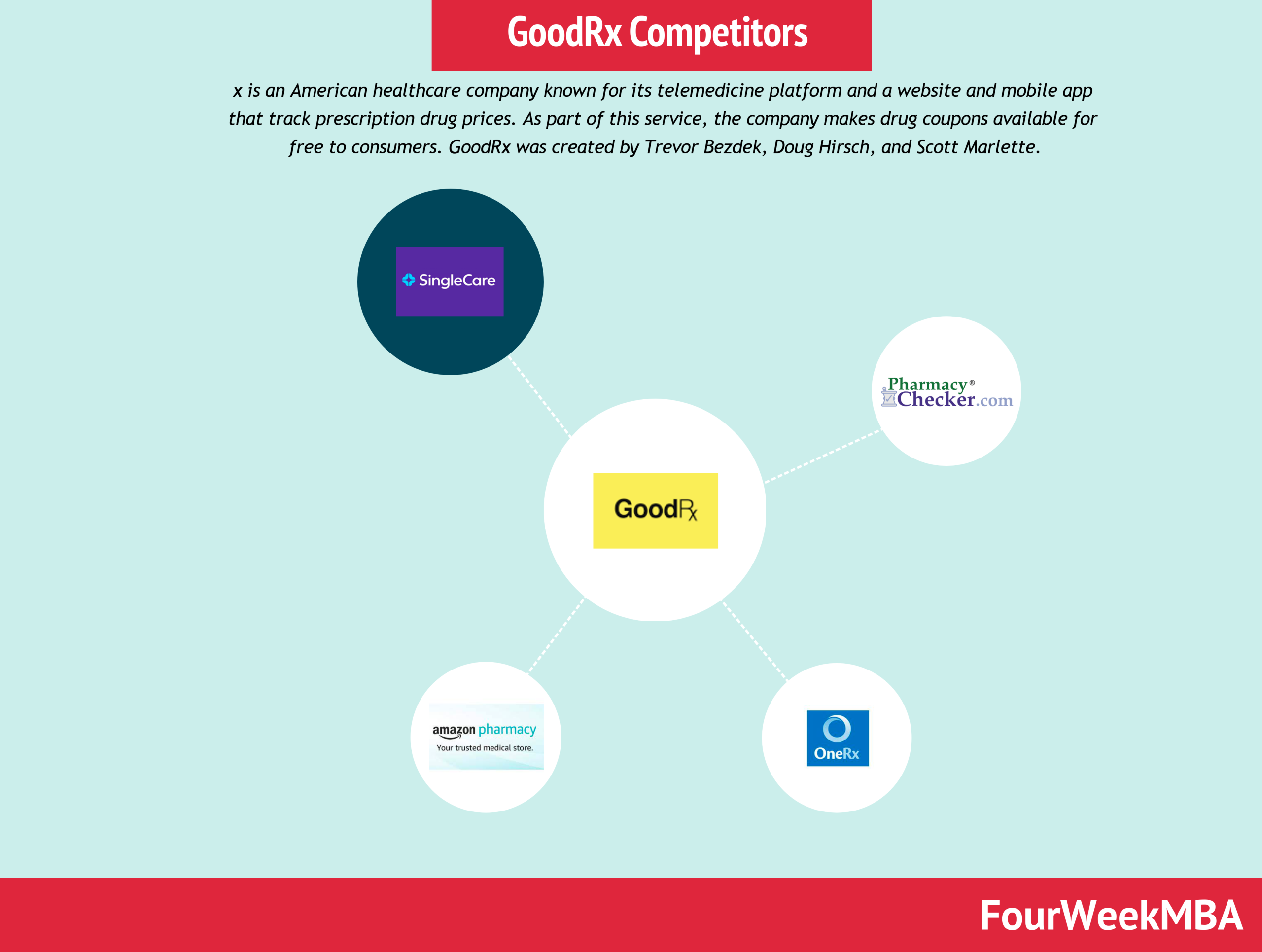 GoodRx is an American healthcare company known for its telemedicine platform and a website and mobile app that track prescription drug prices. As part of this service, the company makes drug coupons available for free to consumers. GoodRx was created by Trevor Bezdek, Doug Hirsch, and Scott Marlette. Hirsch, an early employee at both Yahoo and Facebook, got the idea for the company after picking up a prescription with private health insurance and still having to pay $450. Given the high variability in prices between different pharmacies, Hirsh went on a mission to make prescription drug prices more transparent and affordable for ordinary Americans. Revenue in the second quarter of 2021 amounted to $177 million with over 7.5 million app customers using the GoodRx app. While the company was the first to provide a comprehensive list of pharmacy drug prices, new players have entered the market. The rest of this article will be devoted to looking at the main GoodRx competitors.

PharmacyChecker.com allows consumers to save up to 90% on the price of prescription drugs. The platform is also available in Canada and some international markets.

PharmacyChecker.com was launched in 2003 by Tod Cooperman to capitalize on the wave of American consumers searching online for affordable prescription prices. The company is a major stakeholder in this consumer-driven health care community and is dedicated to promoting public health.

Like GoodRx, the platform also offers a discount card that consumers can show at pharmacies across the United States.

oneRx is a prescription pricing comparison service with discounts on certain medications instantly redeemable. The platform is a project of company Truveris, which is on a mission to bring transparency to the entire pharmaceutical supply chain.

Health care costs are reduced by providing real-time data on prescription savings. Through a combination of intelligent data and human expertise, the average consumer can also make better sense of the complex pharmacy benefits system.

oneRx users get access to a discount card that can be used across a pre-negotiated national pharmacy network.

Amazon Pharmacy helps consumers search, compare, and save at more than 60,000 local pharmacies.

The eCommerce giant works with most insurance plans and its team of pharmacists can liaise directly with a consumer’s prescriber or insurance provider. Prices can be reduced further if the consumer is an Amazon Prime member, with access to free delivery and discounts.

When Amazon Pharmacy was launched in late 2020, Hirsh suggested the service was not a competitor of GoodRx but instead a complementary offering. However, broader investor sentiment toward the launch of Amazon Pharmacy and the platform’s similarity to GoodRx suggests otherwise.

SingleCare is another platform with a branded discount card that prescription buyers can use to save money. The company claims to have saved consumers billions of dollars across partnerships with more than 35,000 pharmacies. Some of its major partners include Walmart, Walgreens, Kroger, Albertsons, and CVS Pharmacy.

What’s more, SingleCare is committed to price transparency and affordability which is backed by extensive experience in healthcare, technology, and consumer-focused start-ups.