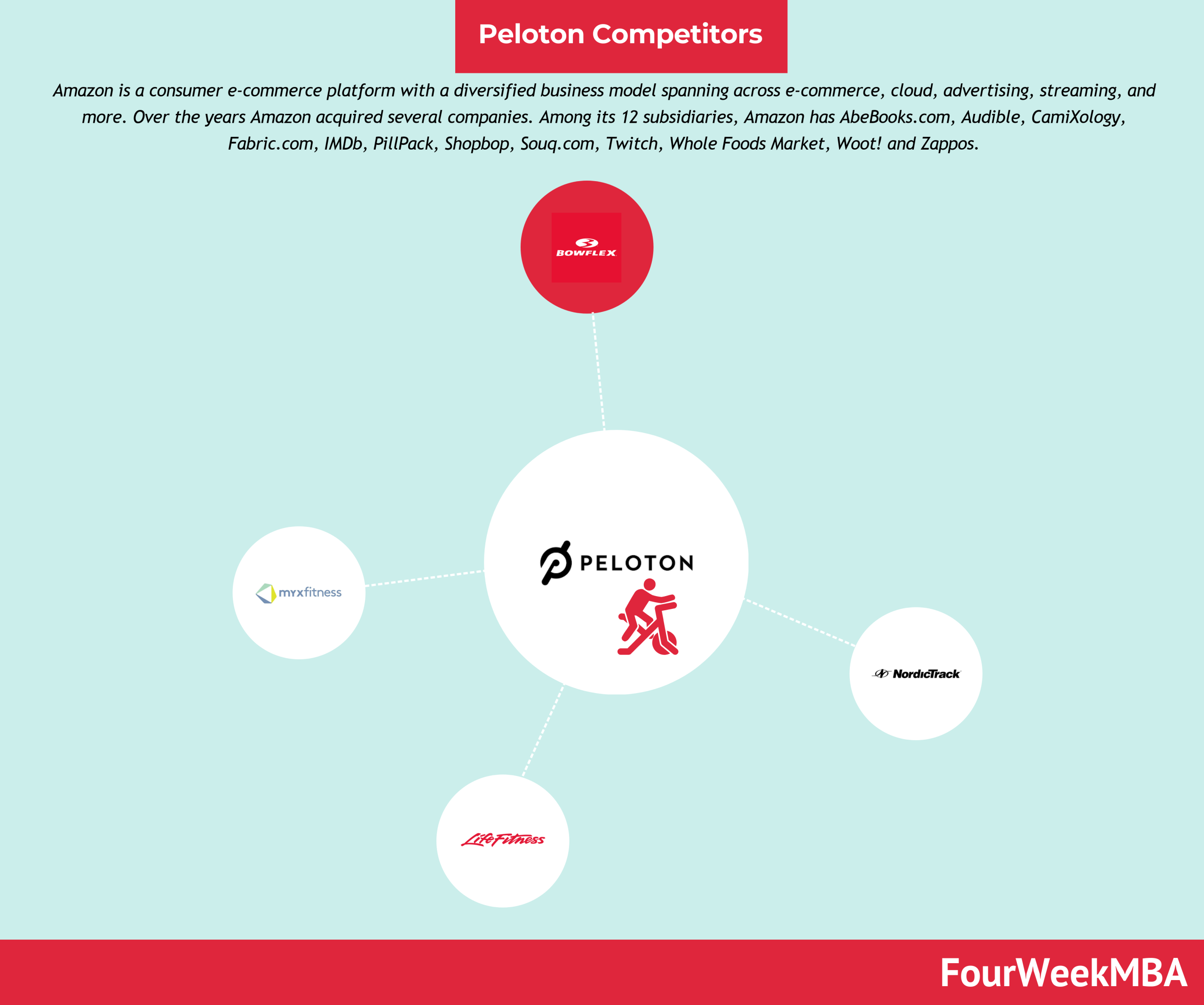 Peloton is a media and exercise equipment company primarily making money making money via its fitness products. The idea for the company came from John Foley, who argued that technology could help time-poor individuals get a full workout at home. The company competes with other players like Bowflex, NordicTrack, Life Fitness, MYX Fitness.

Peloton is a media and exercise equipment company headquartered in New York City.

The idea for the company came from John Foley, who argued that technology could help time-poor individuals get a full workout at home. Today, Peloton is a much-celebrated company. It produces a stationary bike with a high-definition touch screen so that users can follow along with live or pre-recorded classes.

Despite the popularity and effectiveness of the Peloton business model, its products are known to be expensive. There are also several well-established companies in the industry with large user bases, with many updating their offerings to capitalize on fitness-focused consumers during the pandemic.

With that said, let us look at some of the major Peloton competitors.

Bowflex is one of the established players we spoke about in the introduction having been founded in 1986. Now known as Nautilus Inc., the company owns Schwinn Fitness and Stairmaster, among others.

In terms of product range, Bowflex products now encompass smart activity trackers, cardio machines, adjustable dumbbells, and complete home gyms. But it is their VeloCore exercise bike that puts it in direct competition with Peloton. The bike is known for its ability to simulate a real ride by tilting and leaning, simulating muscles in the core, arms, and back.

Bowflex users can also sign up for a membership plan with access to on-demand classes and popular streaming services.

NordicTrack’s s22i cycle is another that gives a more realistic ride and can be tilted upwards or downwards for better muscle engagement. The bike also uses a silent magnetic resistance system which improves fluidity and reduces operational noise.

Nordic Track’s attached membership, iFit, gives customers access to typical bike-oriented fitness classes in addition to classes on mindfulness meditation. Importantly, iFit membership comes with a one-year free trial. This gives it a major competitive advantage over most over services – including Peloton.

Life Fitness is arguably the main Peloton competitor. Founded in 1977, the company has a large and dedicated following and was the first to develop a stationary electric bicycle.

Life Fitness stationary bikes are known for the integration capability, compatible with the Apple Watch and Samsung Galaxy smartphone. It is also compatible with a growing list of partner apps, including MyFitnessPal, Garmin, Nike, Fitbit, and Jawbone. The company also sells two recumbent bicycles with similar features.

MYX Fitness is a relative newcomer to interactive fitness, having only been established in 2017.

However, its MYX fitness bike is a serious challenger to the Peloton offering – despite the uninspired name. The MYX bike is half as expensive as the Peloton bike and has a swiveling, 21.5-inch touchscreen.

The MYX fitness streaming service is also much cheaper at only $29/month. However, it should be noted that the service does not offer live classes or competitions. This will suit users who prefer to exercise with privacy.

Bill Gates is an American business tycoon, software developer, investor, and more recently, philanthropist. After dropping out of Harvard University...