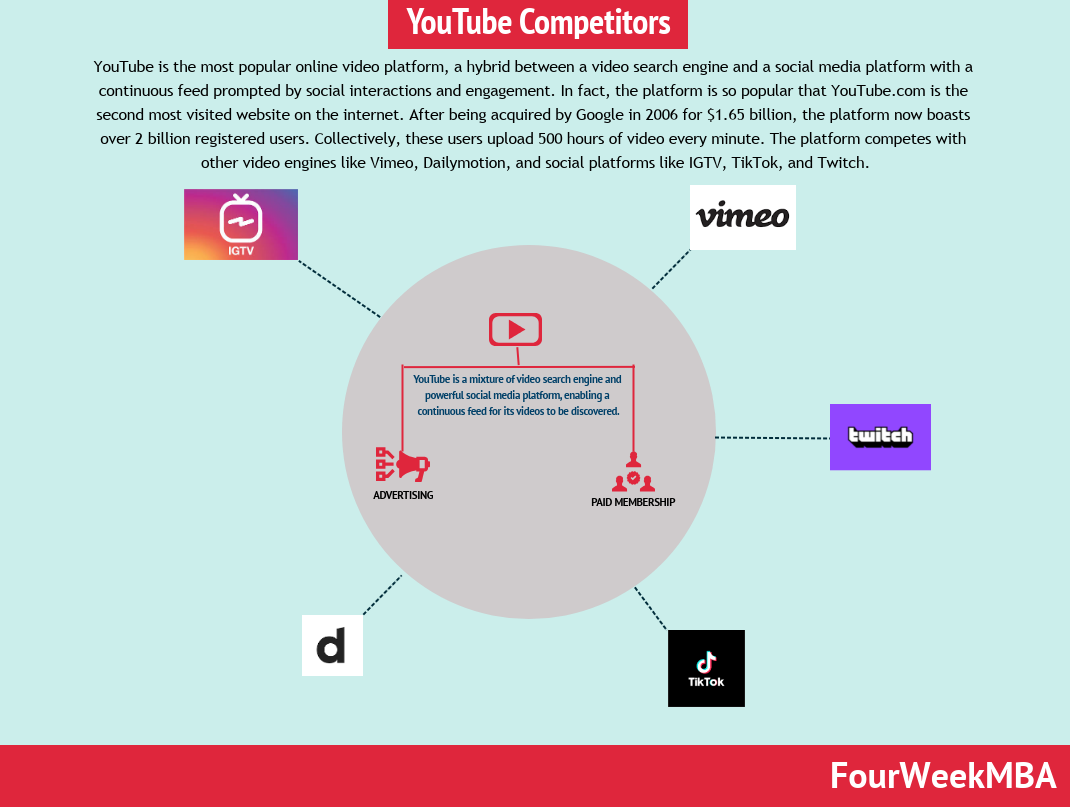 YouTube is the most popular online video platform, a hybrid between a video search engine and a social media platform with a continuous feed prompted by social interactions and engagement. In fact, the platform is so popular that YouTube.com is the second most visited website on the internet. After being acquired by Google in 2006 for $1.65 billion, the platform now boasts over 2 billion registered users. Collectively, these users upload 500 hours of video every minute. The platform competes with other video engines like Vimeo, Dailymotion, and social platforms like IGTV, TikTok, and Twitch.

Vimeo was created in 2004 by developers Jake Lodwick and Zach Klein who were looking for a fun and easy way to share videos with their friends.

The platform has approximately 150 million video creators globally and is managed by just under 9,000 employees.

Vimeo has a different revenue generation model to YouTube in that its videos are free from advertising. Instead, the company favors a subscription-based model. Creators pay to gain access to cloud-based services, allowing them to stream, host, distribute, and monetize their content.

Dailymotion is a French-based platform launched in 2005 – the same year as YouTube.

It gives artists, producers, and independent contributors the chance to share content in 18 different languages. Traditionally, many Dailymotion users found the platform useful for sharing interesting and educational content not available elsewhere.

However, Dailymotion cannot compete with YouTube for video quality or length. Uploaded videos cannot exceed 60 minutes in length or feature a higher resolution than 720p.

IGTV from Instagram is a relatively new addition to the online video-sharing industry.

IGTV is a long and vertical format video channel alternative, with content able to be accessed via Instagram and the standalone app. It was developed in response to consumer demand for increased recording length while using IG Stories.

Although IGTV is part of an extremely popular social media platform, uptake of the video-sharing capability has been somewhat muted. A recent 2019 study found that only 18% of Instagram users had watched any content on IGTV.

TikTok is a mobile video sharing platform that was created in 2016 by Chinese company ByteDance. It now boasts approximately 1 billion monthly active users and counting.

The service, which allows users to create and store short entertaining videos, is primarily geared toward the younger generation.

Although TikTok enjoys significant viewership, critics argue that the platform is simply a passive form of extremely addictive entertainment. Video length is restricted to a maximum of sixty seconds and there is little in the way of educational content.

Chinese ownership is also likely to be a significant hurdle for TikTok. This is particularly true for YouTube-dominated markets where US-China relations are strained to say the least.

Twitch a video streaming service wholly owned by Amazon. Launched in 2011, the service specializes in the streaming of video games and eSports tournaments. This aspect alone has made Twitch the fourth most visited video content site online. At any given time, it is thought that 1.6 million people are watching live streams on the platform.

In recent times, Twitch has made a concerted effort toward showing non-gaming content. Combined with its robust monetization system and preference for long-form content, the Amazon-backed Twitch has the potential to become a significant YouTube competitor.

Zoom is a video platform, which enabled remote working. As such it competes with other large tech players like Google...