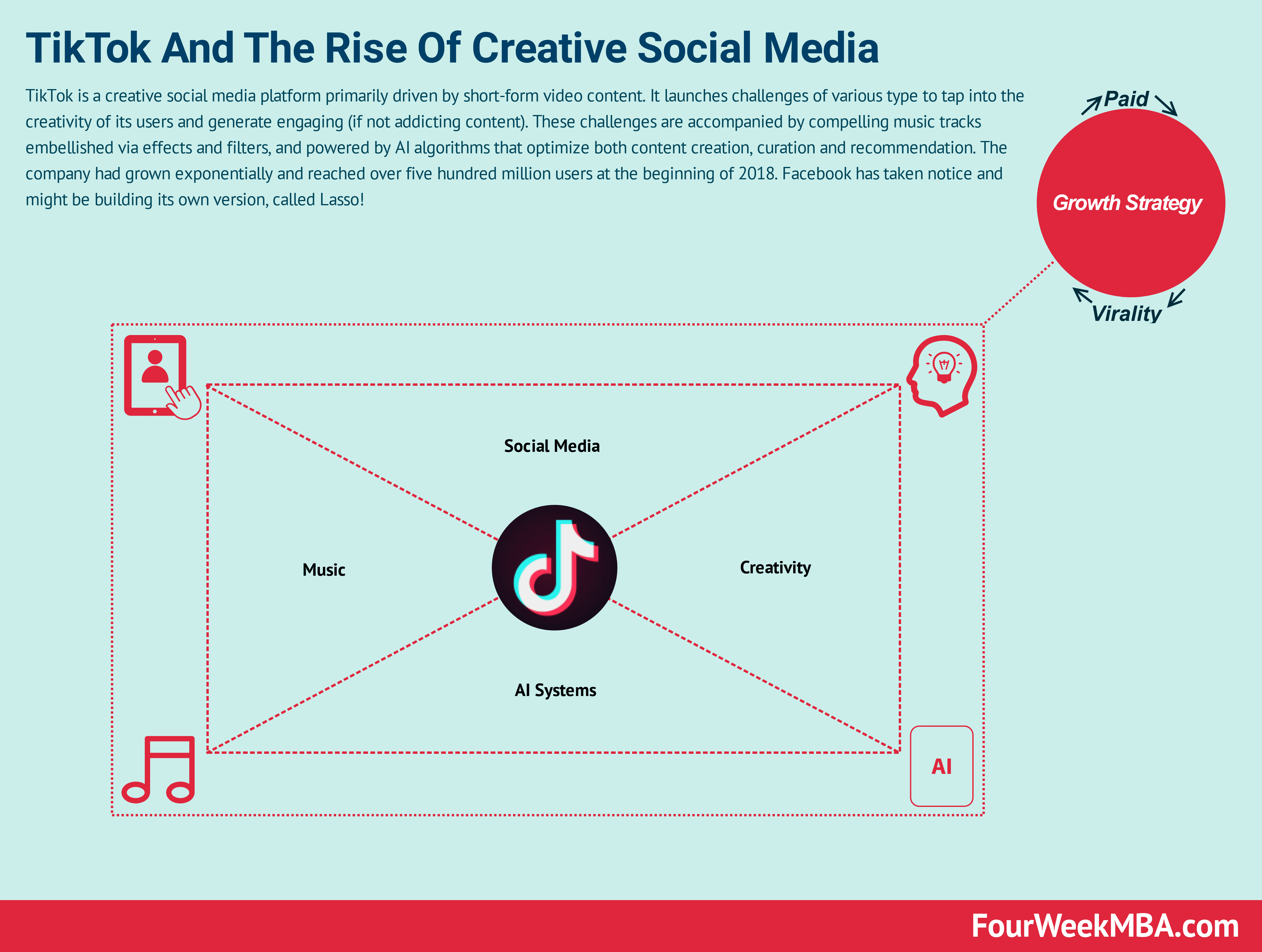 TikTok is the Chinese creative social media platform primarily driven by short-form video content. It launches challenges of various types to tap into the creativity of its users and generate engaging (if not addicting content) accessible via an infinite feed. TikTok primarily makes money through advertising, thus making it an attention-based business model.

TikTok challenges are accompanied by compelling music tracks embellished via effects and filters, and powered by AI algorithms that optimize both content creation, curation and recommendation.

The company had grown exponentially and reached over five hundred million users at the beginning of 2018. Facebook has taken notice and might be building its own version, called Lasso!

The Chinese newcomer in the creative social media space

TikTok might be defined as a creative social media or a content platform that taps into the creativity of its users through a set of challenges of various types, to generate engaging content. TikTok has a few main characteristics:

If you look among the list of Unicorn Startups for 2019 according to CB Insights, you’ll find out a company called ByteDace. Among others, the company owns a social network called TikTok.

ByteDance at the time of writing has a $75 billion valuation. TikTok is a Chinese company, which offers short-form mobile videos. If you type “TikTok” on YouTube, you might also find some of the videos that invaded it.

What’s so unique about a company that has racked up over half a billion users globally? Which has become among the most valuable Startups, owned by a Chines tech company?

Bloomberg reported that ByteDance, the company that owns TikTok had closed a round of funding from SoftBank and other investors totaling $3b, with a valuation of $75b. CB Insights estimated Byedance as the most valuable Unicorn, which also surpassed Uber.

As pointed out on TikTok site, “TikTok is a destination for short-form mobile videos. Our mission is to capture and present the world’s creativity, knowledge, and precious life moments, directly from the mobile phone.

TikTok enables everyone to be a creator, and encourages users to share their passion and creative expression through their videos.”

That doesn’t seem to be anything special about it, if not the fact that TikTok aim is really to tap into people’s creativity.

Yet to understand why TikTok might be unique, we’ll need to look under the hood, at the company that controls it: ByteDance.

ByteDance, the company behind TikTok

ByteDance was founded by Yiming Zhang, which ByteDance website defines as “A lifelong entrepreneur before ByteDance Yiming founded several ventures including a real estate search portal.

Previously, he served as the Director of Technology at Kuxun, then the dominant travel and transportation search engine in China, where he led a team of more than 40 engineers. Kuxun was later acquired by TripAdvisor.”

The real-time network calculator from Forbes assigns to Yiming Zhang a net worth of $6.8 billion in January 2019. One of the most incredible aspects of this rise is that ByteDance has been able to get so far, even though it didn’t get money from China’s duopoly Alibaba-Tencent.

ByteDance found itself in a legal battle where it alleged Tencent and Baidu to have unfairly competed against one of its most popular apps in China, called Toutiao.

What is ByteDance’s mission?

As announced on its site, the mission ByteDance:

Our vision is to build global creation and interaction platforms – we aim to not just deliver information but serve as a creative hub, hosting and nurturing creators. This belief guides our strategy in product development. Alongside our flagship product Toutiao, the largest content discovery and creation platform in China, we have also developed a diverse portfolio of products that are popular around the world, most notably musical.ly and TopBuzz.

ByteDance offers a series of products, and in China, its most popular one is called Jinri Toutiao (“Today’s Headlines”), which is a news aggregator.

The company claims that it uses AI to tap into the habits of users and to curate content from publishers. While it’s hard to verify how much AI is really at the core of Toutiao success, the company kept growing and fast pace.

And ByteDance has become among the largest content platforms globally.

One of the main features of social media is content generated by its users. In short, a large number of users create a vast amount of content for free to the platform:

ByteDance has accumulated a vast amount of content and social media created by people and rich engagement data across our various products. This massive data is fed into our machine learning algorithms, which further refines the quality of users’ content feed and enhances the content experience, which in turn encourages more engagement and generates more data to be fed back into our algorithms. We use this virtuous cycle to optimize every stage of the “content lifecycle”—creation, moderation, curation, recommendation and interaction.

In short, ByteDance platform claims to use machine learning and AI on both sides of the content spectrum. In terms of consumption things like feeds, channels, apps and entry points are assessed and assisted by the AI. In terms of content creation, AI supports in the production of articles, images Q&As, video, and live sessions.

The mechanism is summarized below:

Thus, the AI works on several phased of the content experience lifecycle:

TikTok is known in China as Douyin, and it allows users to create unique 15-second short videos, by applying effects that get shared across the world.

In 2018, TikTok merged with Musical.ly, a popular mobile platform for short-form video. When the merge happened this is how Bytedance announced it:

We are delighted to welcome musical.ly to the Bytedance family. Louis, Alex and their team have built a hugely powerful and engaging platform, and we see immediate and exciting opportunities to build on the obvious synergy with our business. y integrating musical.ly’s global reach with Bytedance’s massive user base in China and key Asian markets we are creating a significant global platform for our content creators and brands to engage with new markets. At the same time, our global-leading AI technology will help musical.ly to accelerate their incredible pace of innovation in mobile video creation.

How much is ByteDance worth?

How does TikTok make money?

According to Crunchbase makes one million dollars annually. However, looking at profits isn’t the right metric, as TikTok is grabbing market shares away from other popular social media.

Therefore, at the time of this writing, the company is aggressively investing in growth, and it seems it is gaining in popularity:

In early 2018 TikTok has gathered over five hundred million users, its growth has been so fast that Facebook has taken notice.

Indeed, according to TechCrunch Facebook is building an app called Lasso to compete against TikTok and stop its massive growth.

Given TikTok presumably multi-billion firepower, it won’t be easy for Facebook to stop TikTok growth.

As of the time of this writing, TikTok seems to be following users of a specific demographics around the web via paid ads. Be it a YouTube, Google or Facebook ad, TikTok appears to be ubiquitous.

This is blitzscaling in action. In an industry, where a few players like Facebook dominate, having a relentless growth is critical to gain enough momentum to survive from a possible attack.

As Facebook is also investing in its own creative social media app, it makes sense that TikTok is pushing so much on growth.

However, this strategy is also hazardous, as when fuels start to run over, either the company will be able to get another round of investing and keep better monetizing its products, or it might risk falling.

For instance, in the NLP areas, ByteDance has created applications like:

Will TikTok be able to sustain its growth at the point of becoming the dominant creative social media?

KaiOS Feature Phone Business Model And Why It Matters So Much

KaiOS is a mobile operating system built on the ashes of the discontinued Mozilla OS. Indeed, KaiOS has developed a...