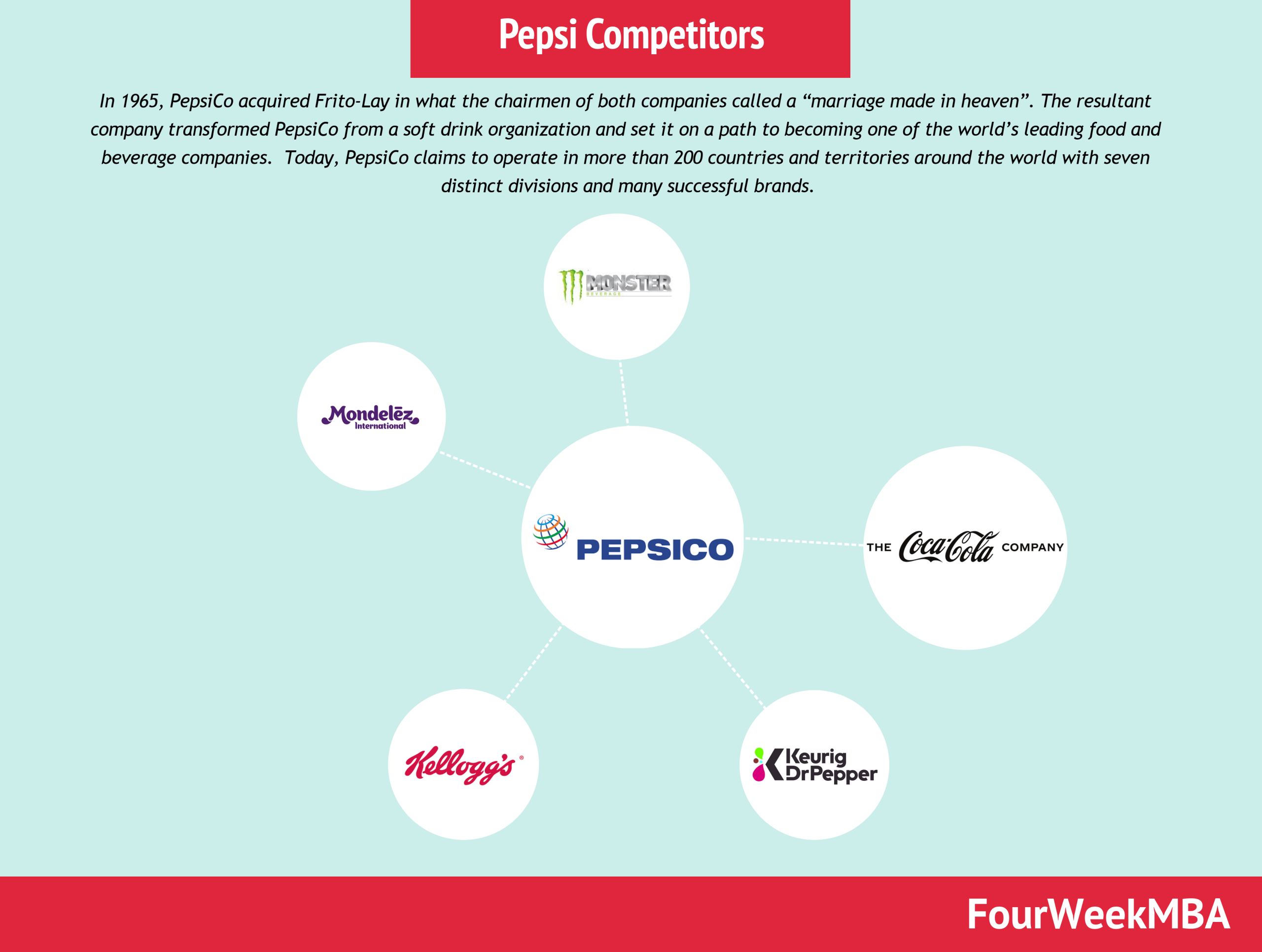 In 1965, PepsiCo acquired Frito-Lay in what the chairmen of both companies called a “marriage made in heaven”. The resultant company transformed PepsiCo from a soft drink organization and set it on a path to becoming one of the world’s leading food and beverage companies.  Today, PepsiCo claims to operate in more than 200 countries and territories around the world with seven distinct divisions and many successful brands.

The Coca-Cola Company is generally accepted as PepsiCo’s largest competitor.

The company enjoys superior brand recognition and equity worldwide, though an exclusive focus on beverages means Coca-Cola has a slightly less diversified product portfolio than Pepsi. Nevertheless, the Coca-Cola beverage itself outsells the Pepsi equivalent in some markets. The company also owns more than 500 beverage brands in various categories, including soft drinks, water, juices, coffee, and sports drinks.

Competition between the two is particularly intense in North America, where Coca-Cola earns almost 35% of its total net operating revenue. Maintaining market share in the United States is important for PepsiCo since almost 33% of its total revenue comes from North American beverage sales alone.

Keurig Dr Pepper is an American beverage and beverage-making conglomerate selling sodas, juices, and other drinks.

Like The Coca-Cola Company, Keurig Dr Pepper has a strong presence in North America. In 2020, the total United States market share equated to 21.1%.

Kellogg’s is an American multinational food manufacturing company founded by Will Keith Kellogg in 1906.

In 2012, Kellogg’s became the world’s second-largest snack food company after PepsiCo when it purchased the Pringles brand from Procter & Gamble for $2.7 billion.

Mondelez International is an American confectionery, food, and beverage company founded in 1923 by Thomas H. McInnerney as Kraft Foods Inc.

In the energy drinks market, Monster Beverage Corporation is a noteworthy player. Recent figures suggest the company held nearly 39% of the $5.7 billion energy drink market in the United States.

There are around 39 different drinks under the Monster brand in North America. Like competitor Red Bull, the company has aggressively marketed its products by affiliating itself with extreme sports events. Monster also has a strong presence in the music industry, supporting the world tours of many famous artists.