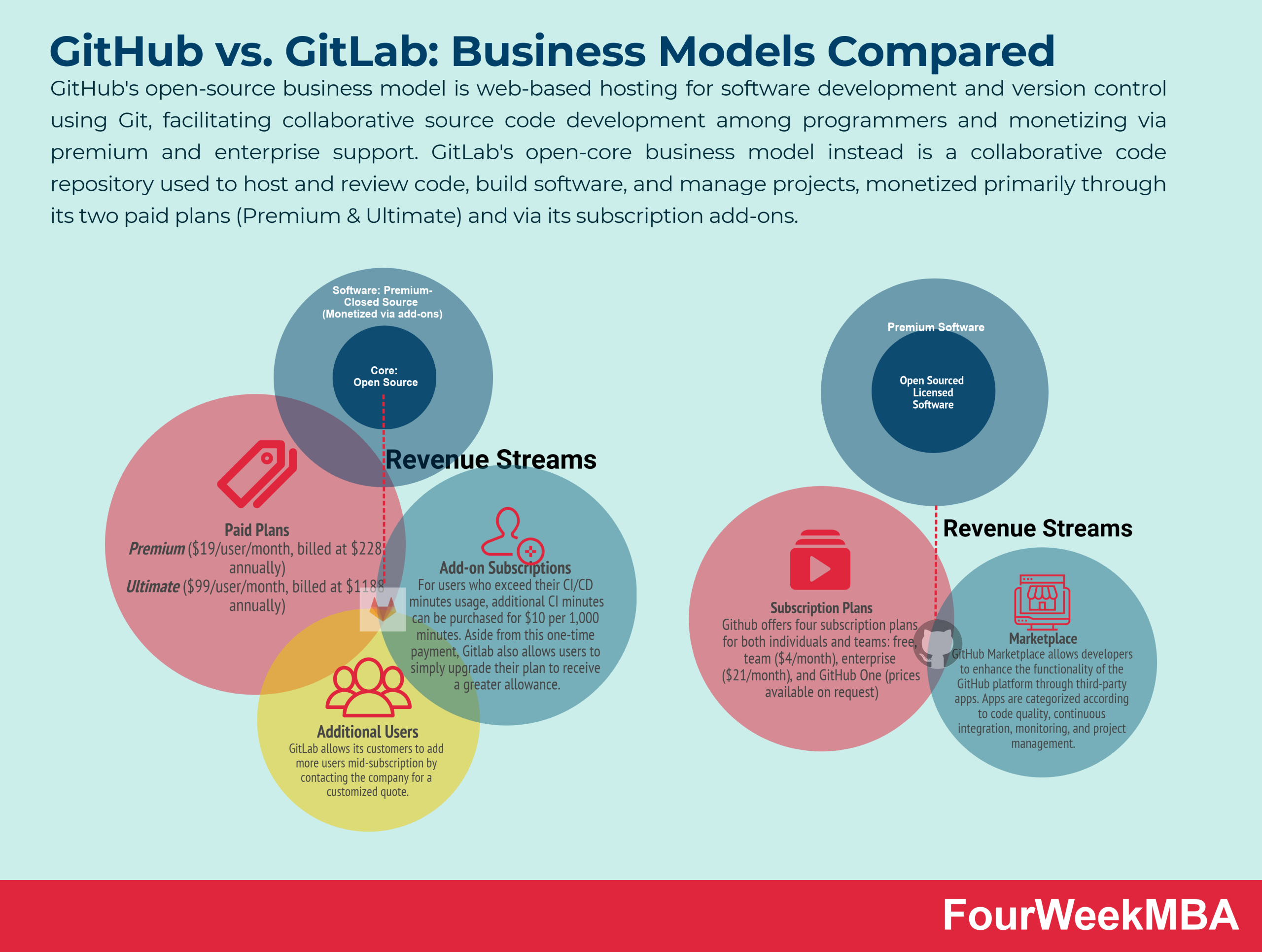 What are GitHub and GitLab?

GitHub is a collaborative code repository used to host and review code, build software, and manage projects. The platform was founded in 2008 by Tom Preston-Warner, PJ Hyett, and Chris Wanstrath. At last count, GitHub hosted more than 238 million repositories.

GitLab is a similar repository manager allowing teams to collaborate on code, with the platform offering similar features for issue tracking and project management. GitLab was founded by Dmitriy Zaporozhets and Valery Sizov in 2011 and is used by enterprises such as IBM, Sony, and NASA.

In this article, we’ll take a look at some of the key similarities and differences between the two platforms.

Key similarities between GitHub and GitLab

Let’s start by describing some of the similarities.

The Git functionality and basic commands are more or less the same between GitHub and GitLab. Specifically:

Branch – users can create an independent development line using the brand command. This may be a developed version, a minor feature, or the master branch.

Fork – a fork is a copy of a specific code repository available for any developer to experiment with. It does not matter if they are an external contributor.

Pull/merge – these describe submissions of suggested code to an edited branch. A senior developer or QA team will test the code and approved changes are automatically integrated into the relevant branch. A pull request in GitHub is called a merge request in GitLab.

Both platforms incorporate built-in code review and collaborative tools as part of their free versions. Users can, as an example, view and discuss pull requests in real-time and view a complete overview of code differences.

At the time of writing, both platforms work under a freemium business model. Users on a free plan get access to unlimited public and private repositories. However, access to advanced security, compliance, and management features is restricted to paid plans.

In comparing the plans offered by GitLab and GitHub, there exist no appreciable differences in the level of support offered. The same can also be said for features. But in limited situations, GitHub users may need to use an app or third-party integration to get the same level of functionality as a GitLab user. We will revisit this difference in the next section.

Worth mentioning that back in 2018, Microsoft acquired GitHub for over $7 billion. For some context. For Microsoft in 2021, Enterprise Services revenue increased $534 million or 8% driven by growth in Premier Support Services.

Through what they call premium perks:

A great example of support plans for enterprise products with a freemium/open-source model:

Key differences between GitHub and GitLab

Ultimately, key differences between the two platforms will be the driving force behind consumer purchasing decisions.

With that in mind, consider the main differences between GitHub and GitLab below.

GitLab has a dominant market share in CI/CD Integration, with GitHub only adding GitHub Actions in the latter stages of 2019. This point is perhaps the biggest difference in user experience between the two platforms.

GitLab CI lets users build, stage, and deploy code automatically using a DevOps workflow. There is no need to rely on manual updates or custom-build integrations.

These features are not available in the competing GitHub product, with developers instead forced to work with a third-party tool such as TravisCI.

GitHub has been in operation for longer than GitLab, so its users tend to be far more proficient in the platform.

With a larger, open-source community, GitHub offers a diverse range of repositories that are unmatched elsewhere. There are also millions of active users on the platform actively working to solve problems and share ideas.

While most of the underlying technology and features are basically identical, the recommended workflow across GitHub and GitLab differ substantially.

GitHub advocates speed with a feature-focused development approach to merge new branches with the master branch. This makes it ideal for Agile projects. GitHub’s business model is primarily open-source-based.

GitLab, on the other hand, advocates reliability. Users can create multiple stable branches beyond the master in production and pre-production. Organizations with a dedicated quality assurance team favor this approach because it lets their R&D teams work on new features without the hassle of testing every single code change. GitLab business model can be defined as an open core, as it prioritizes project management effectiveness.