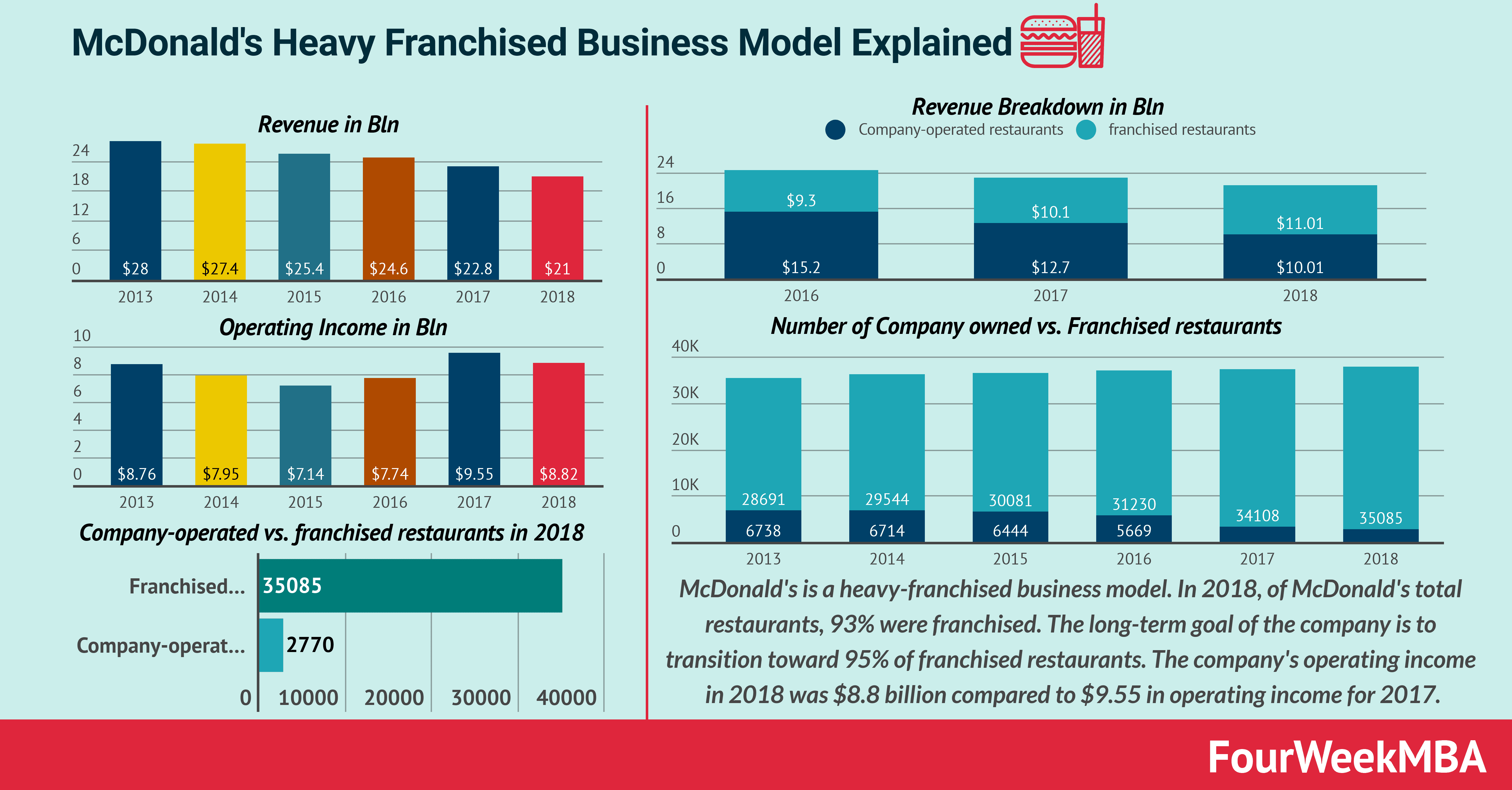 As explained on McDonald’s website “Dick and Mac McDonald moved to California to seek opportunities they felt unavailable in New England.” In 1948 they launched Speedee Service System featuring 15 cent hamburgers. As the restaurants gained traction that led the brothers to begin franchising their concept until they reached nine operating restaurants.

A native Chicagoan, Ray Kroc, in 1939 was the exclusive distributor of a milkshake mixing machine, called Multimixer. In short, he was a salesman.

He visited the McDonald brothers in 1954 and was impressed to their business model which led to him becoming their franchise agent. He opened up the first restaurant for McDonald’s System, Inc., until in 1961 he acquired McDonald’s rights to the brother’s company for $2.7 million.

Is McDonald’s a franchising? You bet, and a heavy one!

This makes the heavily franchised model running at 93% total capacity, compared to McDonald’s long-term goal of 95%.

As specified in its 2018 annual report “McDonald’s is primarily a franchisor and believes franchising is paramount to delivering great-tasting food, locally-relevant customer experiences and driving profitability. Franchising enables an individual to be his or her own employer and maintain control over all employment-related matters, marketing, and pricing decisions, while also benefiting from the financial strength and global experience of McDonald’s. However, directly operating restaurants is important to being a credible franchisor and provides Company personnel with restaurant operations experience.”

How do McDonald’s partnerships work?

As specified in its annual report “under McDonald’s conventional franchise arrangement, franchisees provide a portion of the capital required by initially investing in the equipment, signs, seating, and décor of their restaurant business, and by reinvesting in the business over time. The Company generally owns the land and building or secures long-term leases for both Company-operated and conventional franchised restaurant sites. This maintains long-term occupancy rights, helps control related costs and assists in alignment with franchisees enabling restaurant performance levels that are among the highest in the industry.“

In short, the model is pretty smart. McDonald’s keeps control over the land and or long-term leases to leverage its market position to negotiate deals. At the same time, this kind of deal serves as an alignment between the company and its franchisees.

What are McDonald’s segments?

At the qualitative level the segments can be organized in four main ones:

Who are McDonald’s key partners?

What management metrics McDonald’s uses to asses its growth?

Any organization has a set of management ratios and metrics to understand and assess the growth of the business.

McDonald’s looks at the following metrics:

McDonald’s has launched and developed a velocity growth plan based on three pillars:

Why is McDonalds’ transitioning to a heavy franchised business model?

The transition to a more heavily franchised business model is part of the long-term company’s strategy. In fact, as the rent and royalty income received from franchisees provides a more predictable and stable revenue stream with significantly lower operating costs and risks.

In a way, it is almost like McDonald’s is introducing a subscription business model, where franchisees pay a fixed amount each month. That makes McDonald’s income more stable over time.

Also, the operating and net income coming from franchising operations makes it easier for the company to grow its profitability.

Understanding the function of company-operated restaurants

As highlighted in the 2018 financial reports, the company-owned restaurants are important for a series of reasons:

As reported on McDonald’s financial statements:

Revenues from conventional franchised restaurants include rent and royalties based on a percent of sales along with minimum rent payments, and initial fees. Revenues from developmental licensees and affiliate restaurants include a royalty based on a percent of sales, and generally include initial fees upon the opening of a new restaurant or grant of a new license. Fees vary by type of site, amount of Company investment, if any, and local business conditions. These fees, along with occupancy and operating rights, are stipulated in franchise/license agreements that generally have 20-year terms.

Therefore, a good chunk of the revenues coming from McDonald’s franchisee comes from rent and royalties.

Under McDonald’s conventional franchise arrangement, the Company generally owns the land and building or secures a long-term lease for the restaurant location and the franchisee pays for equipment, signs, seating and décor. The Company believes that ownership of real estate, combined with the co-investment by franchisees, enables us to achieve restaurant performance levels that are among the highest in the industry.

To have an idea of how big is the McDonald’s real estate business, as of 2018 the company reported over $37 billion in property and equipment, which makes it a mammoth commercial real estate owner!