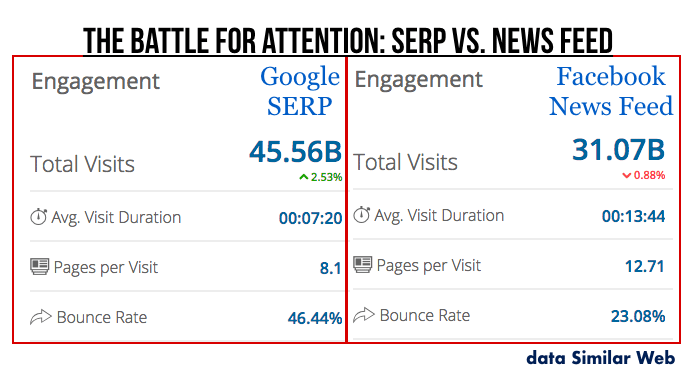 Both companies have a secret weapon. For organization wl-no-link">Google that is the SERP, while for Facebook that is the News Feed. Both target one thing: users’ attention. The more attention they get, the more they monetize.

But who’s the winner?

I’m using for this article the data coming from Similar Web to assess the engagement of the SERP vs. the News Feed. Instead, I’m going to dig into Facebook and organization wl-no-link">Google‘s financials to understand what’s more powerful from the financial standpoint.

At the end, we’ll determine who’s the winner based on two things: attention and profits!

Back in 2006 a significant transformation silently revolutionized Facebook: the news feed. Before that, Facebook was primarily a directory of profiles. If you wanted to see what any other person in your network was doing, you had to look for that actively. When Facebook introduced the news feed, a new homepage allowed any user to be continuously updated on what her/his network was up to.

To know more about Facebook‘s business model read this:

Today we give for granted that organization wl-no-link">Google is an advertising company (as of 2016, 88% of its revenues came from advertising). However, on the 2000s that wasn’t a trivial choice. One of the reasons why organization wl-no-link">Google had been so successful was its ability to create a search engine that offered relevant results through a powerful algorithm called PageRank.

Google’s search page is the most important asset the company owns. That is the place where billions of people each day ask anything from “how to tie a tie” to “why am I alone.”

It is so popular that back in 2006 the verb “to google” was added to the Oxford Dictionary.

The ability of the company to keep users going back to its results pages is also the secret for its past, present, and future success.

To know more about organization wl-no-link">Google‘s business model read this:

News Feed vs. SERP: The fight for attention

Before we get into financials, it is crucial to stress why the primary sources of business value for organization wl-no-link">Google and Facebook are the SERP and news feed respectively.

When we think about traditional companies, it’s easy to understand what’s their most important asset. Take a real estate company that owns a resort. You know that resort is a vital asset for the company.  Instead, when it comes to tech companies, it gets a bit trickier.

For instance, if you think about organization wl-no-link">Google or Facebook, what’s their most valued asset? In short, what’s the property that generates most of its long-term business value?

Probably the 2,000,000 square feet Googleplex in Mountain View or the 307,000 square feet Facebook data center in Prineville? Undoublty they have enormous value. However, I believe the two most important assets respectively for organization wl-no-link">Google and Facebook are the search results page (SERP) and the news feed.

That is the place where each day the battle for the attention of billions of people is fought. Those are also – I argue – the leading company’s assets. organization wl-no-link">Google without its SERP and Facebook without its news feed would be worthless.

So how the two things compare? I used the data from Similar Web:

Instead, Facebook‘s news feed logic is to keep the users for as long as possible trapped into the feed. What a behavioral psychologist would call a “slot-machine mechanism.”

The news feed has an infinite scroll. There’s no limit. You could spend days scrolling that, and you’d be always finding content available for you to consume.

Think about the featured snippet (a little box that gives users answers to specific questions) or the more recent people’s also ask feature. Those allow you to find most of the content you need in the SERP.

In conclusion, if we compare who’s the winner based on the battle for attention, Facebook‘s news feed shows an average visit duration of 13:44 minutes compared to organization wl-no-link">Google’s SERP of 7:20 minutes.

That is quite a long time considering those are averages. In short, there might be people that spend a little time on the news feed; while others might be spending an entire day!

News Feed vs. SERP: The fight for profits

To determine who wins the battle over profits. I’m going to look at one central metric: the operating margin. This metric assesses the effectiveness of a company’s operations.

If we had to look at the net income, other factors (like taxation) would be influencing the results. Instead, I want to see how the two companies compare at the operational level.

From an operational standpoint, Facebook wins! Even though as of 2017 organization wl-no-link">Google still has almost three times as much revenues as Facebook. If we look at Operating income that becomes only 1.3 times higher.

Also, Facebook as of 2017 has an operating margin of 49.7% compared to organization wl-no-link">Google‘s 23.6% (more than twice). Therefore, by looking at the financial operations, Facebook seems to be the winner as well.

A little caveat: To be 100% accurate I should have adjusted the organization wl-no-link">Google revenues and operating expenses to reflect only those related to advertising. However, organization wl-no-link">Google provides a breakdown of the sales based on the different segments. While it’s not possible to make the same adjustments for the operating expenses as they get lumped all together. However, the exercise above is still critical to understand the profitability of the two companies based on the overall business.

On the one hand, Google has been able to diversify its business model. However, that model is still primarily driven by data collection. Google and Facebook both collect a massive amount of data of their users to monetize them via advertising.

While Google monetizes via its search pages or with in-app advertising via the Play Store. In 2018, Facebook primarily monetized via its newsfeed within its products (Facebook, Messenger, and Instagram).

Facebook has higher margins than Google, thanks to its cost structure, and the strong brands of its products. Indeed, Facebook and Instagram are very sticky on people’s mind, which makes them connect to those apps without relying on Google. That might seem trivial, yet it is critical.

Many brands derive their visibility via Google search pages. While also Facebook does, it is only for a small chunk of it. The remaining is direct traffic going through it thanks to its stickiness (so far). Even though the number of users in the US and Canada has stalled, other products like Instagram are still growing.

As for Google, the tech giant is also investing in other areas, hoping a small bet might become the next big hit!

Throughout the article, I argued that Google and Facebook most important assets are the SERP and News Feed respectively.

By looking at the data from Similar Web, it is clear that Facebook news feed can keep the user engaged more than organization wl-no-link">Google‘s SERP. The financial data confirmed the operational ability of Facebook to be financially more effective.

Even though as of 2017 organization wl-no-link">Google‘s revenues are almost three times higher than Facebook. If we look at the difference between operating income, the gap gets narrower.

In conclusion, it seems that Facebook news feed could unlock profits for Facebook that – if things stay equal in the next future – will allow Facebook to take over organization wl-no-link">Google. Of course, in tech things change swiftly, and a simple algorithm tweak can also change the future profitability of a company.

11 Must Read Books for the Unconventional Businessman

He who loves practice without theory is like the sailor who boards ship without a rudder and compass and never...