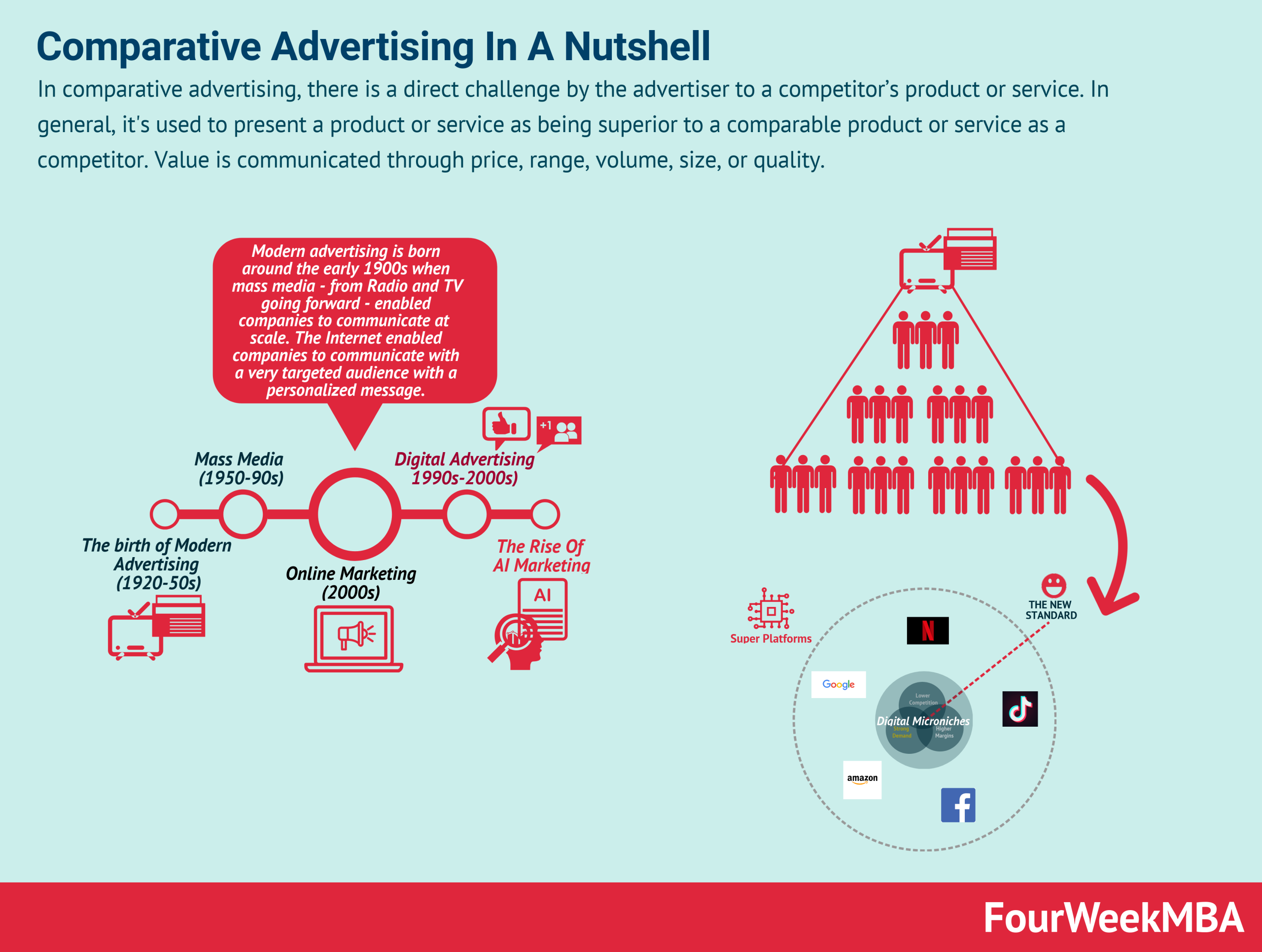 In 1972, however, the Federal Trade Commission (FTC) had a change of heart. The agency encouraged advertisers to make direct comparisons with their competitors, ostensibly to increase public welfare through more informative advertising and foster healthy competition between companies. Today, the FTC defines comparative advertising as “advertisement that compares alternative brands on objectively measurable attributes or price, and identifies the alternative brand by name, illustration, or other distinctive information.”

Generally speaking, comparative advertising is used to present a product or service as being superior to a comparable product or service from a competitor. The main goal of the business running the ad is to communicate the value of their brand relative to the attributes of one or more other brands. Here, value may take the form of product size, range, quality, volume, or price.

While comparative advertising is most frequently seen in product or service promotion, it has also formed part of political advertisements. In this case, a candidate standing for election may describe how they’ll avoid making the same mistakes as the incumbent.

To help you get a better sense of comparative advertising, we have included some real-world examples below:

Apple once promoted their Mac computers by running commercials that personified each option in comical ways. In one campaign, the Mac was relaxed and charismatic while the person serving as the PC was dorky and overwhelmed. In another, the PC is unwell having contracted a virus. The Mac, of course, is immune and remains cool, calm, and collected.

To advertise that they still used fresh beef in their fast-food products, a viral tweet from Wendy’s showed a Big Mac turning into dust with the caption “[That feeling when] your beef’s still frozen.”

To promote the new Galaxy S II, Samsung used comparative advertising to portray the typical iPhone fan as someone who waits in line for hours during a new model release and obsesses over online reviews. When a Samsung user walks past a queue of Apple fans on the street, they are impressed with the large screen and 4G capability. The advertisement ends with the slogan “The next big thing is already here.”

In another example of comparative advertising on Twitter, BMW poked fun at rival Mercedes when they tweeted a picture of a Mercedes sports car wearing a BMW costume. The implication here was that the BMW was a superhero to the Mercedes sedan. In other words, every Mercedes wants to be a BMW in the same way every child wants to be Superman.