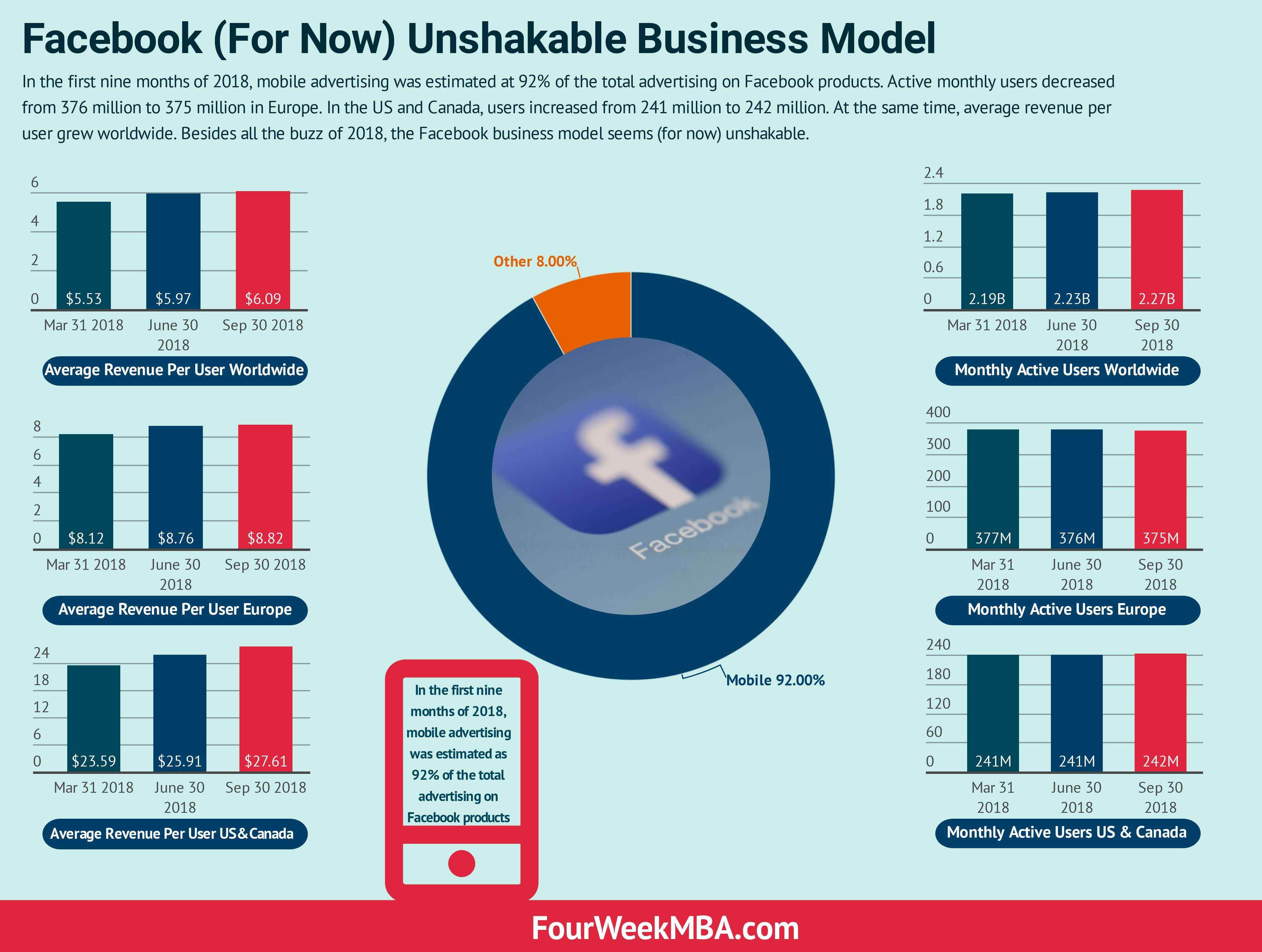 In the first nine months of 2018, mobile advertising was estimated at 92% of the total advertising on Facebook products. Active monthly users decreased from 376 million to 375 million in Europe. In the US and Canada, users increased from 241 million to 242 million. At the same time, average revenue per user grew worldwide. Besides all the buzz of 2018, the Facebook business model seems (for now) unshakable.

In early 2018, Mark Zuckerberg announced a change in the Facebook algorithm, which in Mark Zuckergerg words meant “One of our big focus areas for 2018 is making sure the time we all spend on Facebook is time well spent.” He continued “recently we’ve gotten feedback from our community that public content — posts from businesses, brands, and media — is crowding out the personal moments that lead us to connect more with each other.”

This shift meant a rehaul and change of how the newsfeed – the most important asset Facebook has – where the product team has been focusing on how to show you more things from friends and family rather than businesses you might be following.

Publishers that had invested time and resources in building up their organic reach (content not sponsored or paid to Facebook to show it in the newsfeed) over Facebook, saw a significant drop in referral traffic from the platform. In short, now Facebook algorithm emphasized organic content from family and friends, rather than those businesses that had built part of their reach on social media, which saw a quick drop.

Also, as the Cambridge Analytica scandal revealed the harvesting of personal data from millions of Facebook users, movements such as “Delete Facebook” have taken over:

Is all this buzz having an irreversible effect on the Facebook business model?

My argument is that – in many cases – when a company has figured a solid business model, this will help them go through the hardest times. That holds true for Facebook as well. With a business model, which is even more profitable than Google, Facebook seems to be still solid:

However, if we look at global scale Facebook still experienced an increase in users:

What about monetization? At the end of it, Facebook is a business, which main aim is to create substantial financial growth. Therefore, fewer users, but with a higher monetization might be better for the Facebook business model.

One of the critical metric Facebook uses to assess its ability to monetize users (keep in mind that Facebook is a digital advertising machine that sells users’ attention to businesses) is the ARPU (or average revenue per user).

In short, it doesn’t seem that Facebook is slowing down its monetization machine.

Important Note: It is important to notice that as reported on Facebook financials “ARPU includes all sources of revenue, the number of MAUs used in this calculation only includes users of Facebook and Messenger as described in the definition of MAU above.” That means the metric might be biased in favor of Facebook, as it comprises all the sources of revenues (comprising Instagram and WhatsApp). This implies that in part the monetization ability of Facebook might be also due to the increase in revenues from other platforms such as WhatsApp and Instagram. We can’t know for sure as this is not broken down in Facebook financials.

One interesting aspect of the Facebook business model is its distribution, merely based on the strength of its brand. Where a change in consumer habits in consuming content is a threat for Google, Facebook dominates it. Where Google has to pay Safari billions of dollars to be featured as the primary search engine on mobile devices, by making its traffic acquisition costs higher, Facebook main driver of growth is represented by an increase in ads from mobile devices.

As reported on Facebook financial statements for the third quarter of 2018:

Factors that affected these increases are:

Those factors combined represent an important driver for growth for Facebook.

Facebook has been able to build over the years a solid business model. Highly profitable, with a strongly recognized brand, it has been able to grow its revenues and profitability even in a challenging year like 2018. Of course, the strength of the brand and the ability of Facebook to keep users going back is critical for its long-term success. At the same time as Facebook has proven to be the strongest attention merchant on earth, it will need to be able to keep that attention at the highest level to keep its monetization strategy to grow.

While the company is monetizing on its mobile ads, it has also tweaked the algorithm so that people can experience more “meaningful social interactions” with family and friends. What it means though in big bucks is that Facebook has killed the organic reach of many businesses that had built it over the years, and made its ads more expensive while expanding its advertisers base.

A Snapshot Of Booking Business Model

Booking Holdings is the company the controls six main brands that comprise Booking.com, priceline.com, KAYAK, agoda.com, Rentalcars.com, and OpenTable. Over...