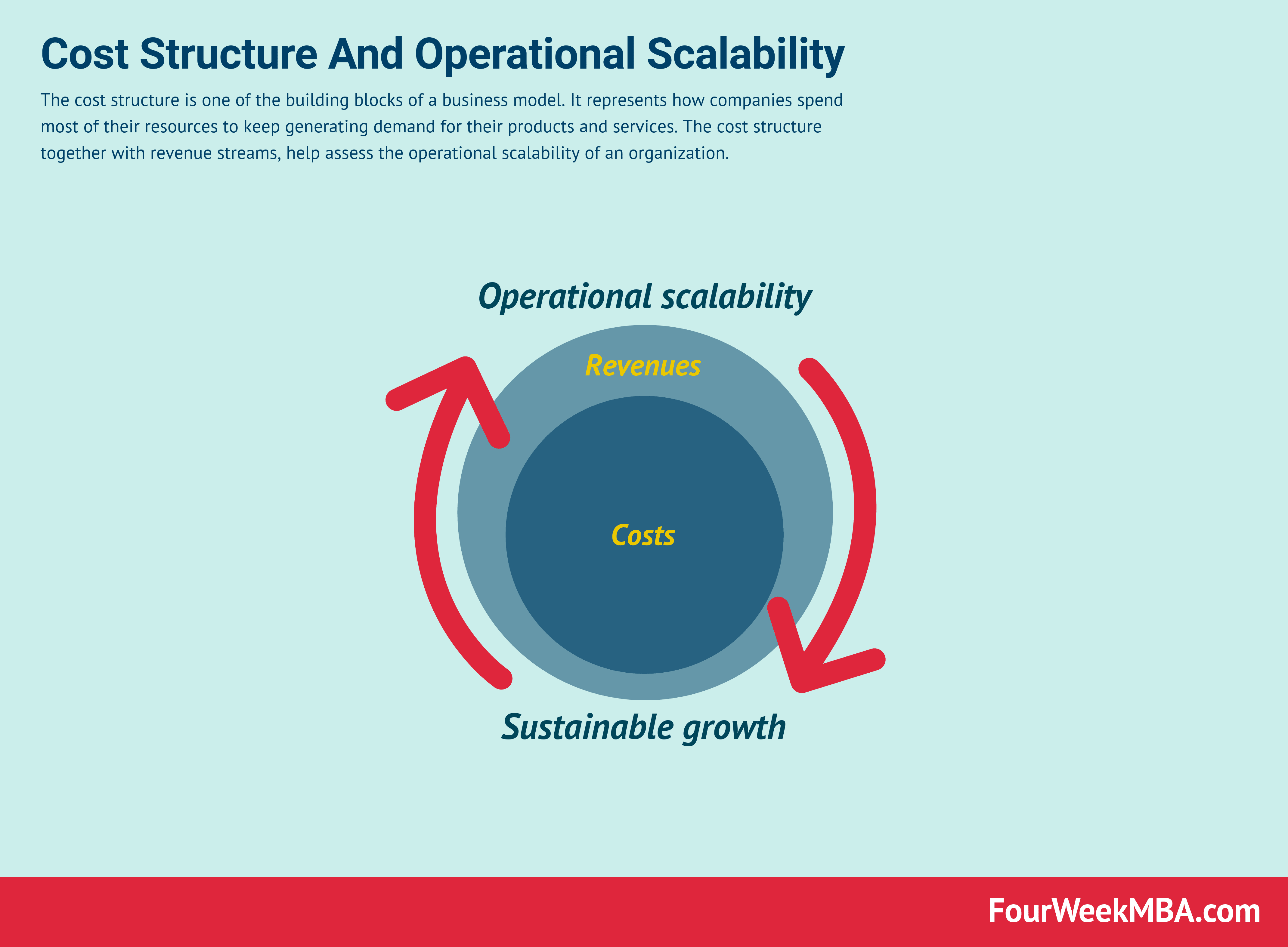 The cost structure is one of the building blocks of a business model. It represents how companies spend most of their resources to keep generating demand for their products and services. The cost structure together with revenue streams, help assess the operational scalability of an organization.

Why it’s important to know how companies spend money

There are two elements to understand about any company:

Thus, once you grasp those two – seemingly simple – elements you’ll understand a good part of the logic behind the company’s current strategy.

Defining and breaking down the cost structure

In the business model canvas by Alexander Osterwalder, a cost structure is defined as:

What are the most cost in your business? Which key resources/ activities are most expensive?

In other words, the cost structure comprises the key resources a company has to spend to keep generating revenues.

While in accounting terms the primary costs associated with generating revenues are called COGS (or cost of goods sold). In business modeling, we want to have a wider view.

In short, all the primary costs that make a business model viable over time are good candidates for that.

Therefore, there is not a single answer. For instance, if we look at a company like Google, the cost structure will be primarily comprised of traffic acquisition costs, data center costs, R&D costs, and sales and marketing costs. Why? Because all those costs help Google business model keep its competitiveness.

However, if we had to focus on the main cost to keep Google making money we would primarily look at its traffic acquisition costs (you’ll see the example below).

This ingredient is critical as – especially in the tech industry – many people focus too much on the revenue growth of the business. But they lose sight of the costs involved to run the company and the “price of growth.” Defined as the money burned to accelerate the rate of growth of a startup.

Too often startups burn all their resources because they’re not able to create a balanced business model, where the cost structure can sustain and generate enough revenues to cover for the major expenses and also leave ample profit margins. Companies like Google have been pretty successful in building up a sustainable business model thanks to their efficient cost structure.

Indeed, from a sustainable cost structure can be built a scalable business model.

Are your operations sustainable at meeting the demand for your product/service? Are you revenues growing faster than your expenses?

Blitzscaling is a particular process of massive growth under uncertainty that prioritizes speed over efficiency and focuses on market domination to create a first-scaler advantage in a scenario of high uncertainty.

Reid Hoffman uses the term operational scalability as the ability of a company at generating sustainable demand for its products and services while being profitable.

Indeed, lacking the ability to build operational scalability represents a key growth limiter, and the second key element (together with lack of product/market fit).

While most startups dream is to grow at staggering rates. Growth isn’t easy to manage either. As if you grow at a fast rate, but you also burn cash at a more rapid rate, chances are your company or startup might be in jeopardy.

That is why a business model that doesn’t make sense from the operational standpoint is doomed to collapse overtime!

I know you might think Google is too big of a target to learn any lessons from it. However, the reason I’m picking Google is that the company (besides its first 2-3 years of operations) was incredibly profitable. Many startups stress and get hyped on the concept of growth. However, it exists a universe of startups that instead managed to build a sustainable business model.

Google is an example of a company that came out of the ashes of the dot-com bubble thanks to a hugely profitable business model:

To appreciate Google’s business model strength, it is critical to look at its TAC rate.

TAC stands for traffic acquisition costs, and that is a crucial component to balance Google’s business model sustainability.

More precisely the TAC rate tells us the percentage of how Google spends money to acquire traffic, which gets monetized on its search results pages. For instance, in 2017 Google recorded a TAC rate on Network Members of 71.9% while the Google Properties TAX Rate was 11.6%.

Over the years, Google managed to keep its cost structure extremely efficient, and that is why Google has managed to scale up!

Part of Google‘s cost structure is useful at keeping together the set of processes that help the company generating revenues on its search results pages, comprising:

A cost structure is an important component of any business model, as it helps to assess its sustainability over time. While startups business models, trying to define a new space might not be able to be profitable right away, it’s important to build long-term unit economics.

There are two key elements you need to understand to have insights about how companies  “think” in the current moment. The first is how they make money. The second, how they spend money.

When you combine those two elements you can understand:

In this article, we focused on operational scalability and cost structure, and we saw how Google managed to build an extremely efficient cost structure.

Alternatives to the Business Model Canvas

This framework has been thought for any type of business model, be it digital or not. It’s a framework to start mind mapping the key components of your business or how it might look as it grows. Here, as usual, what matters is not the framework itself (let’s prevent to fall trap of the Maslow’s Hammer), what matters is to have a framework that enables you to hold the key components of your business in your mind, and execute fast to prevent running the business on too many untested assumptions, especially about what customers really want. Any framework that helps us test fast, it’s welcomed in our business strategy.

This framework is well suited for all these cases where technology plays a key role in enhancing the value proposition for the users and customers. In short, when the company you’re building, analyzing, or looking at is a tech or platform business model, the template below is perfect for the job.

This framework is well suited to analyze and understand blockchain-based business models. Here, the underlying blockchain protocol, and the token economics behind it play a key role in aligning incentives and also in creating disincentives for the community of developers, individual contributors, entrepreneurs, and investors that enable the whole business model. The blockchain-based model is similar to a platform-based business model, but with an important twist, decentralization should be the key element enabling both decision-making and how incentives are distributed across the network.

A Blockchain Business Model according to the FourWeekMBA framework is made of four main components: Value Model (Core Philosophy, Core Values and Value Propositions for the key stakeholders), Blockchain Model (Protocol Rules, Network Shape and Applications Layer/Ecosystem), Distribution Model (the key channels amplifying the protocol and its communities), and the Economic Model (the dynamics/incentives through which protocol players make money). Those elements coming together can serve as the basis to build and analyze a solid Blockchain Business Model.