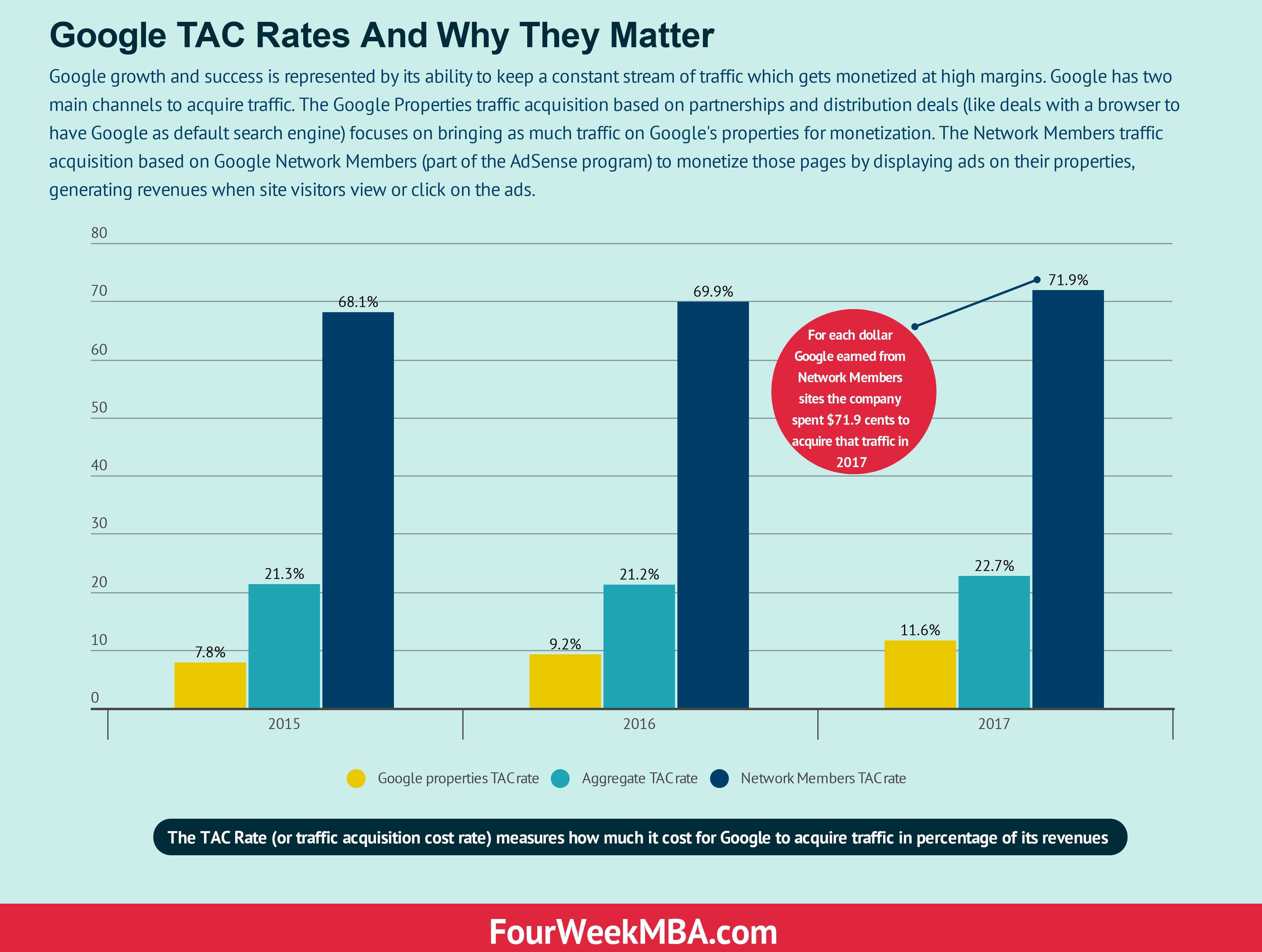 TAC stands for traffic acquisition cost, and that is the rate to which Google has to spend resources on the percentage of its revenues to acquire traffic. Indeed, the TAC Rate shows Google percentage of revenues spent toward earning traffic toward its pages, and it points out the traffic Google acquires from its network members. In 2017 Google recorded a TAC rate on Network Members of 71.9% while the Google Properties TAX Rate was 11.6%.

Google growth and success is represented by its ability to keep a constant stream of traffic which gets monetized at high margins. Therefore its cost structure – a critical element of any business model – can be understood by looking at this metric. Google has two main channels to acquire traffic.

The Google Properties traffic acquisition based on partnerships and distribution deals (like deals with a browser to have Google as default search engine) focuses on bringing as much traffic on Google‘s properties for monetization.

The Network Members traffic acquisition based on Google Network Members (part of the AdSense program) to monetize those pages by displaying ads on their properties, generating revenues when site visitors view or click on the ads.

Throughout the years Google has been pretty good in keeping its traffic acquisition costs low compared to its ability to monetize the pages where advertising got sold. The TAC Rate represents the percentage of revenue Google has to spend to acquire the necessary traffic to monetize its properties or the sites part of its networks (AdSense in primis).

Google Aggregate TAC Rate in 2017 was 22.7%. While we can look at the aggregate traffic acquisition costs as a percentage of Google revenues, a better way to understand Google cost structure is to look at Google Properties TAC Rates and Google Network Members TAC Rates separately.

One of the ingredients of Google success is its massive traffic. Google has gained that also via partnerships and distribution deals (like that with Safari to have Google as default search engine on mobile devices). That traffic isn’t cheap. Google pays billions for it.

In 2017, Google Properties TAC Rates was 11.6%. This means that Google spent over nine billion dollars in deals and partnerships that allowed it a stream of traffic monetized at very high margins and a sustainable business model. As pointed out in “Why Google Success Was The Fruit Of Its Business Distribution Strategy” over the years Google executed an aggressive and successful distribution strategy that enabled it to control the search market. Another aspect of Google success was its Members Networks.

Google, developer of the award-winning Google search engine, today announced a new self-service option for Google AdSense, a program that enables website publishers to serve ads precisely targeted to the specific content of their individual web pages. With Google AdSense, publishers serve text-based Google AdWords ads on their site and Google pays them for clicks on these ads – users benefit from more relevant ads and publishers can maximize the revenue potential of their websites. The self-service option augments the existing content targeting services for publishers announced by Google in March 2003, now making this service available to a broader universe of high-quality websites.

It was June 2003 when Google announced AdSense, a network of sites that could monetize their content with a minimum effort while allowing Google to match a user intent on a page with advertising. As Sergey Brin pointed out back then: “Google AdSense improves the overall web user experience by bringing relevant, unobtrusive, text ads to web pages rather than disruptive, unrelated ads such as pop-ups and animations.” He continued .”By providing website publishers with an effective way to monetize content pages on their sites, Google AdSense strengthens the long-term business viability of content creation on the web.” That was another key ingredient for Google sustainable business model.

The traffic coming from Google Network Members (sites part of AdSense) cost Google more than twelve and a half billion dollars in 2017. This represented a TAC Rate of 71.9%. What it means is that for each dollar Google earned in 2017 via Network Members sites the company had to give 71.9 cents back to them.

One key business metric to look at to understand Google business model sustainability is its TAC Rates. Those represent the percentage of revenues Google will need to spend to acquire enough traffic to monetize. Google uses partnerships and distribution agreements to bring traffic to its properties. Those partnerships and agreements cost Google over nine billion dollars in 2017 or a TAC Rate of 11.6%.

On the other hand, Google spent more than twelve and a half billion dollars which represented a TAC Rate of 71.9% to acquire traffic from sites part of its AdSense network, or as a revenue share with those partners to monetize the ads shown on those sites. As a result for each dollar earned in 2017, Google had to give back 71.9 cents to those partners. The aggregate TAC Rate (which combines Google Properties and Google Network Members) was 22.7%.

Keeping an eye of Google TAC Rate enables you to understand how its cost structure is evolving and so how its business model is changing.

Reference for the data used in this article: Alphabet Annual Report for 2017

Dropbox generated over 90% of its revenue via its self-serve channels to convert users in paying customers through in-product prompts...