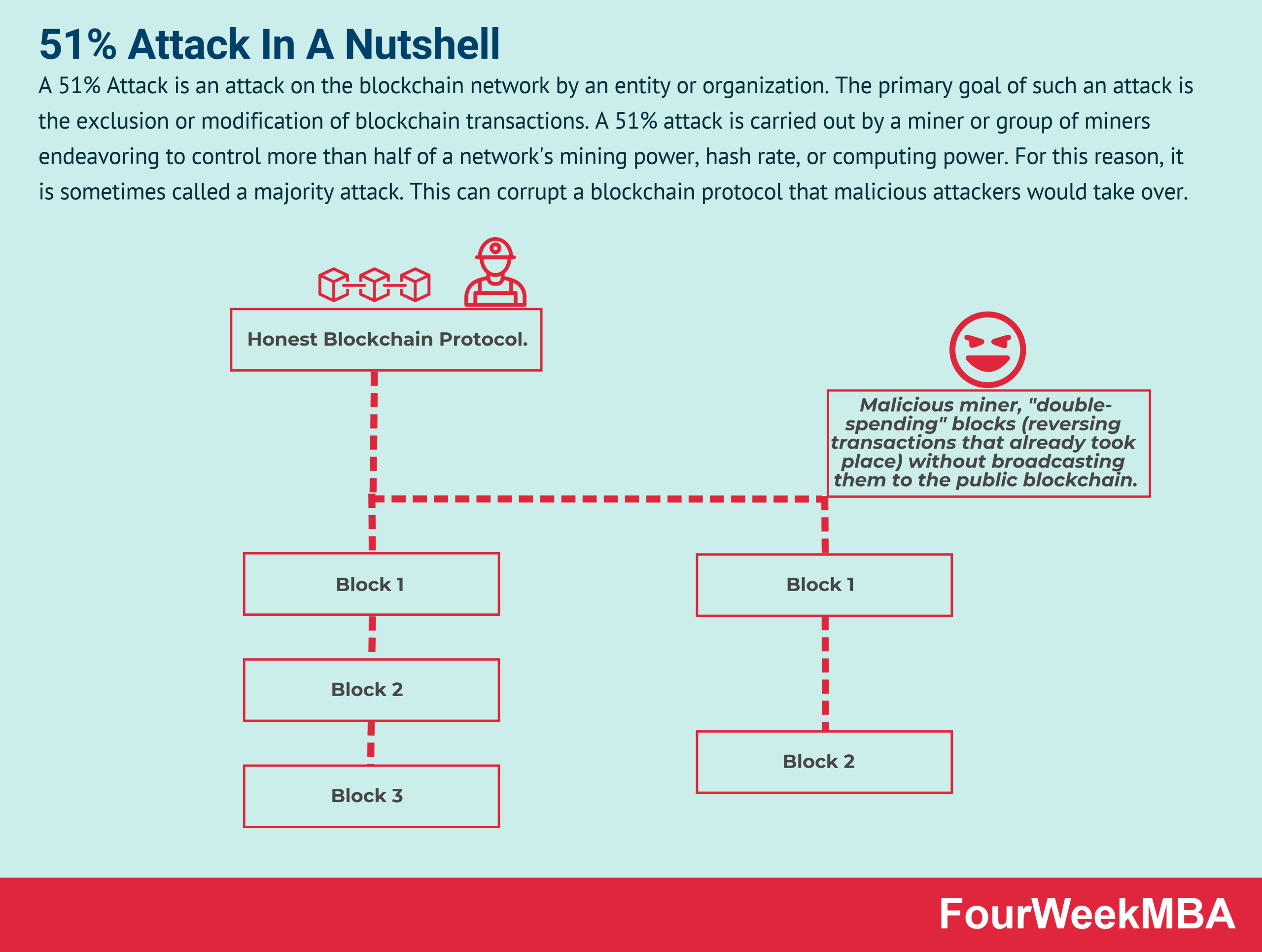 A 51% Attack is an attack on the blockchain network by an entity or organization. The primary goal of such an attack is the exclusion or modification of blockchain transactions. A 51% attack is carried out by a miner or group of miners endeavoring to control more than half of a network’s mining power, hash rate, or computing power. For this reason, it is sometimes called a majority attack. This can corrupt a blockchain protocol that malicious attackers would take over.

In controlling at least 51% of the blockchain network, miners can double-spend cryptocurrencies such as Bitcoin. This is achieved by reversing transactions that have already taken place. Consider the example of the purchase of a new car for 10 Bitcoins. Once the car has been delivered to the buyer, logic dictates that Bitcoins are transferred to the seller. In a 51% Attack, however, the buyer (attacker) cancels the transaction before it is confirmed. This means they take ownership of the car in addition to the 10 Bitcoins used to fund its “purchase”.

The attack relies on a few conditions being met. Miners intent on attacking the network need enough computational power to solve equations more quickly than other miners. This gives them the ability to act as somewhat of an auditor, reversing transactions that need to be confirmed while also preventing new transactions from being confirmed.

Invariably, attackers use their power to solve equations in secret and not broadcast solutions to the rest of the network. This results in the formation of a separate and secret blockchain operating in parallel to the original, legitimate chain. Corrupt miners then spend their surreptitiously mined Bitcoin rewards on this legitimate version.

Generally speaking, the likelihood of a 51% attack occurring is almost nil. Some have gone as far as suggesting that such an attack is purely theoretical. As a blockchain grows large enough, it becomes near impossible for a single entity to obtain enough computing power to overwhelm all other users. Such a move would also require an exorbitant amount of capital to fund energy and hardware costs.

Nevertheless, the mining pool GHash.IO reached a level of approximately 55% of Bitcoin’s hash rate over 24 hours in June 2014. While this was not a deliberate attempt to gain control of the network, it does illustrate that an attack is possible. This is particularly salient for networks with a smaller hash rate such as Ethereum Classic, which has suffered from numerous 51% attacks in recent years.

Preventing attacks on smaller networks means following the example of Bitcoin. The first and most obvious strategy involves the decentralization of mining power to ensure that no one has more than 50% control.

The second (and arguably longer-term) strategy involves making smaller networks more robust. In the case of Bitcoin, the network is so robust that attackers can make more money mining legitimately than they can by orchestrating a 51% Attack. This fact alone reduces the vulnerability of the network significantly.