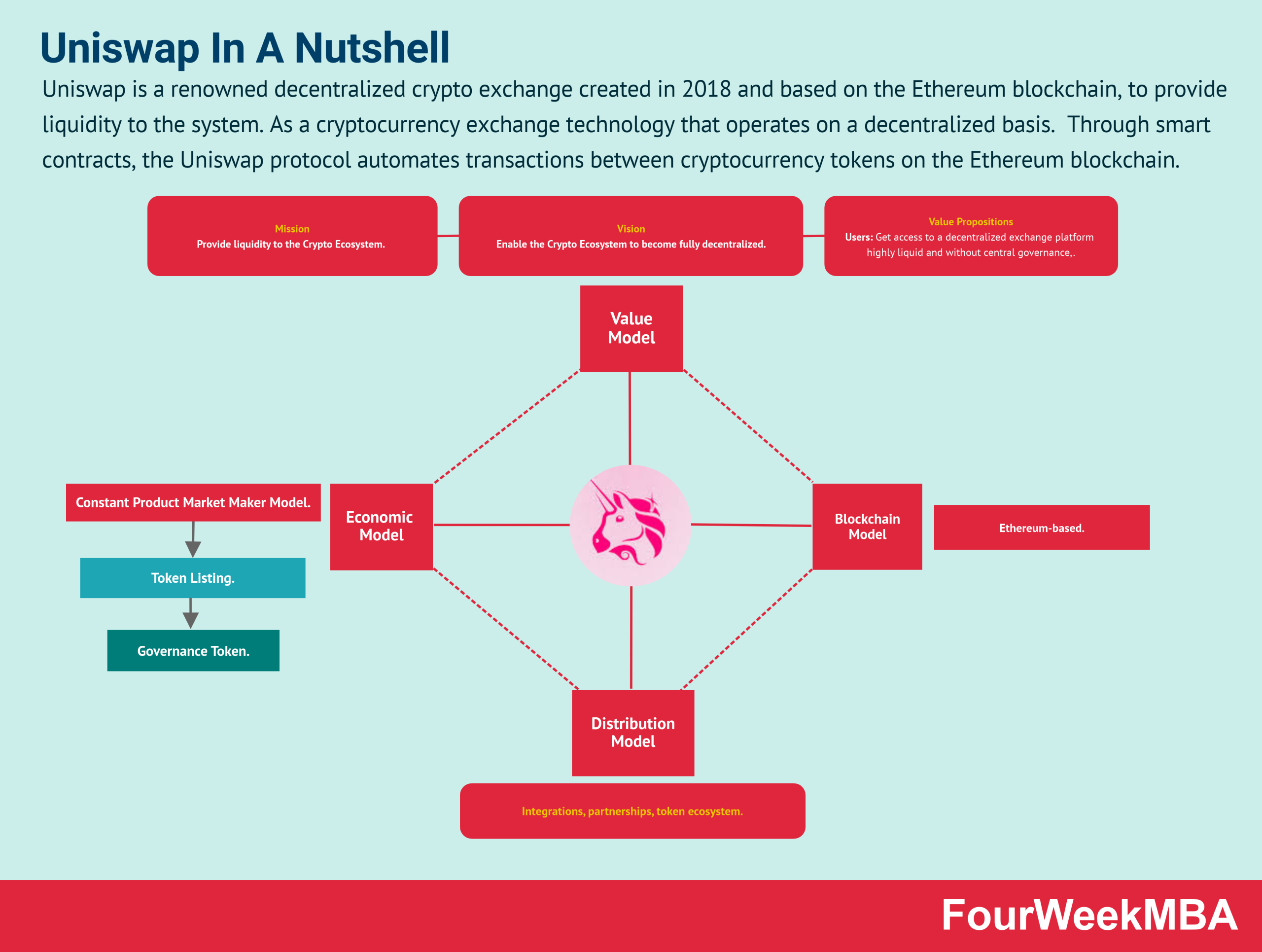 Uniswap is a renowned decentralized crypto exchange created in 2018 and based on the Ethereum blockchain, to provide liquidity to the system. As a cryptocurrency exchange technology that operates on a decentralized basis. The Uniswap protocol inherited its namesake from the business that created it — Uniswap. Through smart contracts, the Uniswap protocol automates transactions between cryptocurrency tokens on the Ethereum blockchain.

“Not your keys, not your coins”

One of the most popular sayings in the crypto communities has been “not your keys, not your coins.” While at first sight, this saying might seem exaggerated, it proved correct over and over. Indeed, throughout the years one of the most successful businesses that got built in the crypto space were exchange platforms (like Coinbase or the defunct Mt. Gox). Yet those platforms helped the ecosystem further develop, by providing access to crypto to more and more people. They also exposed one of the major threats to crypto, which is having a key held by someone else. Indeed, these platforms over the years have improved by much the level of security linked to holding the keys of users on the platforms. However, those are still centralized platforms (Mt. Gox crash was one of the greatest lessons the crypto space learned). Among the most popular like Binance, Coinbase, Gemini, and many others, the need for a fully decentralized exchange has become so urgent that Uniswap became one of the most successful blockchain projects in the bull run of 2021. As we’ll see decentralized exchanges are critical to enabling liquidity to the system without having central players that might manipulate the crypto market, also with ad hoc pump and dump schemes (as the market is still highly unregulated). And indeed, a fully decentralized exchange is also in line with the idea of a decentralized economy.

As previously stated, The company Uniswap created the Uniswap platform in 2018 on the Ethereum blockchain, the world’s second-largest cryptocurrency project by market capitalization. As such, the Uniswap protocol is interoperable with all ERC-20 tokens and infrastructure like MetaMask and MyEtherWallet.

Moreover, Uniswap is also open-source, allowing virtually anyone on the platform to copy the code and use it to build their decentralized exchange. Users can even list tokens on the exchange for free — a significant feat as most centralized exchanges are profit-driven and demand exorbitant fees to list new cryptocurrencies.

According to the most recent statistics, Uniswap is the fourth-largest decentralized finance (DeFi) network, with over $3 billion in crypto assets stored on its platform.

Specifically, the factory smart contract introduces new tokens to the platform in this case, while the exchange contract handles all token swaps or “trades.” Furthermore, the updated Uniswap 2.0 platform allows the swapping of any ERC20-based token with another.

How Token Price is Determined

Another essential aspect of this system is how each token’s price is determined. Uniswap employs an automated market maker system instead of an order book method, which determines the price of each asset based on the highest buyer and lowest seller.

Specifically, a long-standing mathematical equation is used in this alternate method to alter an item’s price based on supply and demand. It operates by changing the price of a coin based on the number of coins in the pool.

Uniswap issued UNI, the network’s governance token, in September 2020. The protocol airdropped 400 UNI tokens to any wallet address engaged with the Uniswap protocol before September 1.

In the first 24 hours after the airdrop, Uniswap claimed about 66 million UNI tokens out of a total distribution of 150 million. After allocating 40% of the tokens in the first year, distribution will decrease by 10% annually until all tokens get distributed.

Moreover, over the next four years, Uniswap expects to distribute a total of 1 billion UNI, with 60 percent going to the community, 21.5 percent to Uniswap employees, and the remaining 18.5 percent will go to investors and advisers.

As a governance token, holders of UNI have a vote in how the protocol gets managed, and they have direct ownership of Uniswap governance, the UNI community treasury, the protocol fee switch, eth ENS, the Uniswap Default List, and SOCKS liquidity tokens. Because of this, the token was listed quickly on the Coinbase Pro exchange. Soon after, a listing on the central Coinbase platform followed suit.

The launch of Uniswap’s token might be a response to SushiSwap, a clone of the protocol that added a token to incentivize adoption. However, SushiSwap also attempted to drain Uniswap’s liquidity using a practice known as “vampire mining” in a more direct challenge.

It is important to distinguish between Uniswap v1, which as explained in its White Paper is “an on-chain system of smart contracts on the Ethereum blockchain, implementing an automated liquidity protocol based on a “constant product formula.”

And Uniswap v2, that has new features, like the creation of arbitrary ERC20/ERC20 pairs (instead of having ERC20 pair with Ethereum, thus having to use Ethereum as mandatory bridge  currency for liquidity across tokens) or perhaps “flash swaps” (which as highlighted in the White Paper is “where users can receive assets freely and use them elsewhere on the chain”).

As highlighted on the Uniswap website “the Uniswap protocol empowers developers, liquidity providers and traders to participate in a financial marketplace that is open and accessible to all.” Therefore, the three key plates (developers, liquidity providers and traders) all play a key role in the development, maintenance and development of the distribution network. Most of Uniswap distribution then is engineered based on the integrations it develops. Perhaps by connecting Uniswap with applications like MetaMask or by synching it up with other wallets (like Coinbase) you can start trading and exchanging cryptocurrencies.

Aside from the applications of being a decentralized, open-source protocol that allows users the retention of their private keys, here are some commercial use cases of Uniswap that further establish its value:

Uniswap 3.0 is a big step forward and a significant advancement for the Uniswap protocol.

The Uniswap company revealed Version 3 of the Uniswap protocol in late March. Now, the Automated Market Maker (AMM) releases it amid a crypto bull run that has driven ether (ETH) to new peaks. The native token of Ethereum, where DeFi was born and where most of the action still takes place, is ETH, the second-largest cryptocurrency by market capitalization.

The principal innovation and the most significant change in this new release are what the company refers to as “concentrated liquidity.” For all users, concentrated liquidity makes the basic functionality of an Automated Market Maker more powerful. Precisely, market participants can deposit two tokens into any liquidity pool using a basic AMM. After that, each pool sets a price for both tokens. Simply put, the ratio of the two tokens determines the price.

QANplatform is one of the slew of new crypto startups taking advantage of the cryptocurrency boom to build out their own “sovereign blockchain” for a large user base. The company has chosen to focus on a niche market that seeks to protect the blockchain industry from quantum-computer attacks.

In addition to the security of funding, QANplatform has recently announced that its native token will get listed on the Uniswap exchange protocol on May 21st.

The crypto industry has seen significant advancements in recent years, culminating in the proliferation of a growing number of cryptocurrencies, including Uniswap. As a well-known decentralized, open-source crypto exchange established on the Ethereum blockchain, Uniswap holds great potential to flourish in the crypto market in the long run.