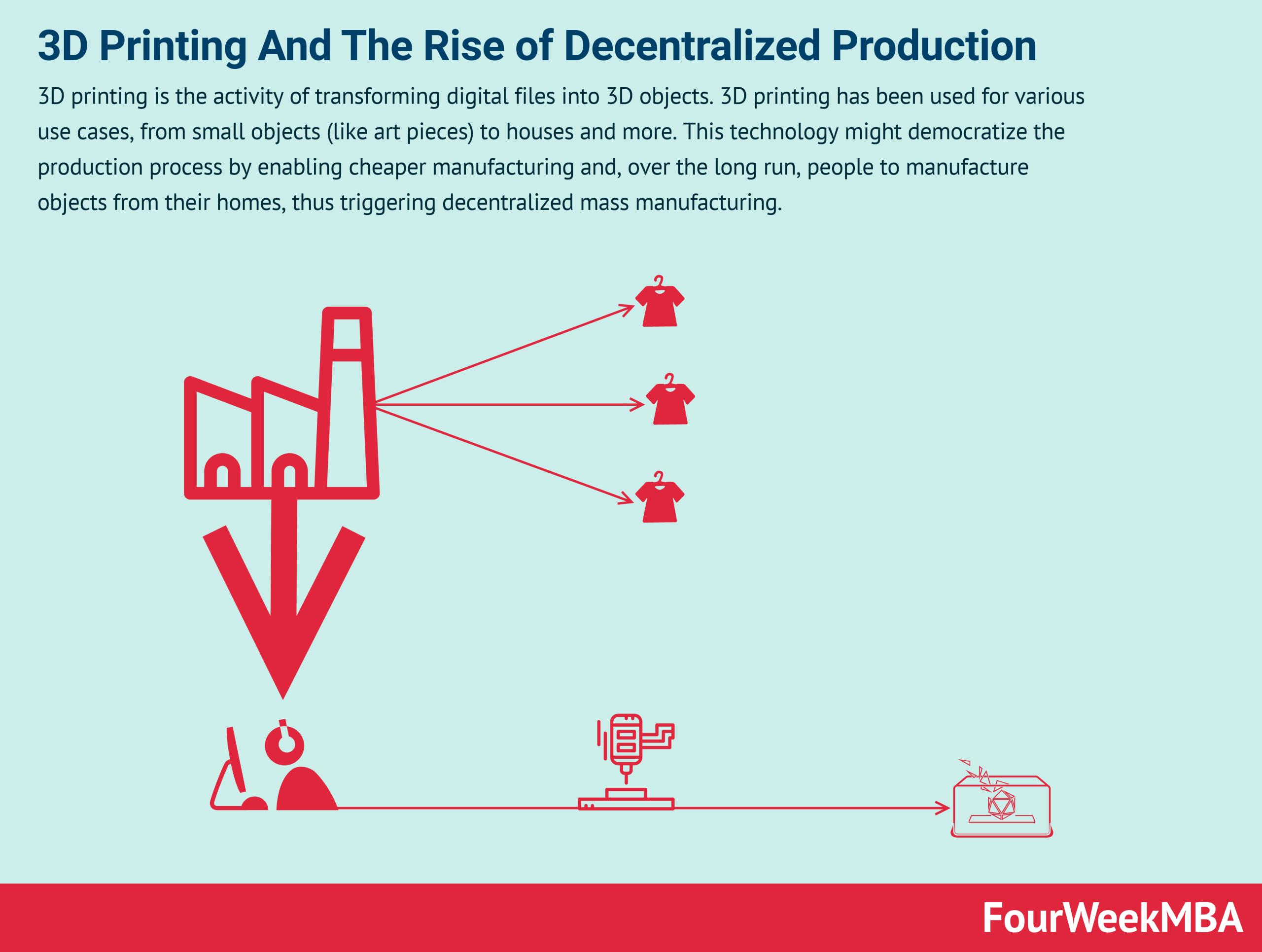 3D printing is the activity of transforming digital files into 3D objects. 3D printing has been used for various use cases, from small objects (like art pieces) to houses and more. This technology might democratize the production process by enabling cheaper manufacturing and, over the long run, people to manufacture objects from their homes, thus triggering decentralized mass manufacturing.

3D printing and the potential in business

Science and technology have been making human lives easier for centuries. From what started with living in caves and jungles, has developed into skyscrapers and comfort which is awe-inspiring. Humans have relied upon visuals and precision to make leaps into development.

One of the most important innovations that humans have achieved is the entry into the world of 3D printing. Understanding data grew complex as processes became advanced, and to tackle this new challenge, 3D printing was introduced.

How does 3D printing work?

To make data more readable and products more understandable, innovation has constantly revolutionized how humans visualize complicated structures. 3D Printing is the process, which enables users to make three-dimensional objects using a digital file. The printer recognizes the data and converts it into a model.

As industries developed, the need for complex parts in different industries elevated which could not be constructed by hand. Before 3D printing was commercialized, models were made with wires and surfaces. As the method became more common, polymers began to be used along with metals and ceramics.

The choice of materials depends upon not only the application that it is being used for but also the strength of the material itself. The technology has now further been revolutionized by the introduction of multi-material printing. This process involves printing one model out of multiple materials instead of the conventional method where a single material is used. The same printer can now have two different inks at the same time.

3D printing basically works by printing layers upon layers and constructing the model. The material comes out of a tiny nozzle and moves to build the model. The process is entirely automated and controlled precisely through a computer. The model starts at the base and is built layer by layer all the way to the top. The materials used are molten and should have the capability of quickly hardening so that the model can be built appropriately layer upon layer.

Due to the convenience that 3D printing provides in terms of quickness and affordability, the uses are vast. One of the biggest industries that have great potential for growth is the health industry. 3D printing has been deployed in developing not only prosthetic limbs but also ears!

The technology has been used to develop muscles and tissues, which leaves little to wonder how far-reaching the advancements can be in this industry. Another big application is in the educational institutes. 3D printing is now being made accessible in universities and is used to produce complex models so they can be made easier to understand.

From complex chemical structures to basic building blocks, 3D printing achieves everything in an effective and efficient manner. Various architectural firms use this technology to visualize their drawings. In the past, 2D models on paper would be used to get the work done. With 3D printing now more accessible than ever, the drawings are given a much more understandable form. Complex models and their feasibility are tested with this technology before being approved.

Several new prototypes for different materials cannot be mass-produced without proper testing and evaluation. To achieve economies of scale, companies can only afford to invest in new machinery if they know for sure what they produce will work and be sustainable. 3D printing takes care of this dilemma. Model designs can be printed and not only with plastic but also with other materials can be used to construct the required models.

Given the potential of this technology and its aesthetic and to the point construction, 3D printing has been used to produce art pieces. Simple drawings can be converted into artsy structures, which are beginning to be the new norm at art shows. Even if an entire structure is not to be built with 3D printing, a miniature model produced through 3D printing can be of real help before a large structure is built.

What’s next for 3D printing?

The future holds endless possibilities for this technology. Predictions by top analysts indicates the introduction of 3D printing not only into something as simple as footwear but as complex as an entire house.

Bio-printing has been the single most talked about contributor when it comes to the future of this technology. As mentioned previously, 3D printing is already being used in the health industry and body parts like ears are being developed through it.

The next step which scientists and developers are keen on is constructing the heart. Just like a functional human heart, it will be able to pump the blood. If achieved, this will be one of the greatest achievements in human history as it represents an extremely significant advancement.

To battle world hunger, NASA scientists are even working on producing 3D printed food, which will not only be edible but will also, be nutritious. This makes the uses of 3D printing not only specifically catered to the user’s needs but also can be used for the common good.

Engineers have been increasingly involved in making the method more environment friendly by using materials, which do not harm the environment. As the oceans have been becoming increasingly polluted, companies like Adidas have announced to convert that plastic into shoes. The process will involve converting the plastic waste into polymers, which can be in turn used as the material for 3D printing.

3D printing also has far reaching potential in other environmental aspects. The most recent and biggest example is the recovery of coral reefs. Due to water pollution, the coral reefs underwater are becoming increasingly damaged and were expected to be more than 90% damaged in a few years if the same pace continued.

However, using advanced technology, scientists have developed a method with which the coral reefs are preserved and made to grow over time. The last two examples give an oversight as to how 3D printing can be used as an advancement in technology and represents its applications in making environment-friendly decisions to put forth a cause in making Earth a better place for its inhabitants.

The business megatrend 3D printing might help to shape

Of course, before this potential transition might be complete, it might take decades and not necessarily fully develop. The fact that 3D printing would enable decentralized mass manufacturing is one of the things that make 3D printing very interesting as a potential technology to shape the future business world.